Here in the 21st Century, distance is as much about culture and language as it is about milage. Consider. It takes an hour and a half to get from Reading to Gatwick Airport. It takes the same time to get from Gatwick to Montpellier, and all of a sudden I find it a hell of a lot more difficult to order a coffee.

France is not just a different country. It’s a different way of life. For the most part, all the shops are closed on a Sunday, and if you’re not an eatery then you close for lunch in the week too. Most of the big supermarkets and stores have a well-stocked and up-to-date comic-book section. They have an aisle and a half for yoghurt, and a single shelf for fresh milk. Needless to say, they don’t get tea. Well, they get it, but you’ll be offered a bag of Twining’s and a cup of hot water, which is not ideal when you crave a cup of builders.

It’s the little things, you know? Those Royale With Cheese moments that pull you up short. The French AZERTY computer keyboard, for example. Makes your Twitter updates really interunseng. You can, for the most part, manage pretty well with the universal language of nod, smile and point. The French are not monsters, and as long as you can manage to be polite, they’ll help you out. You just end up looking and sounding like an idiot, and regret not paying more attention in O Level French. 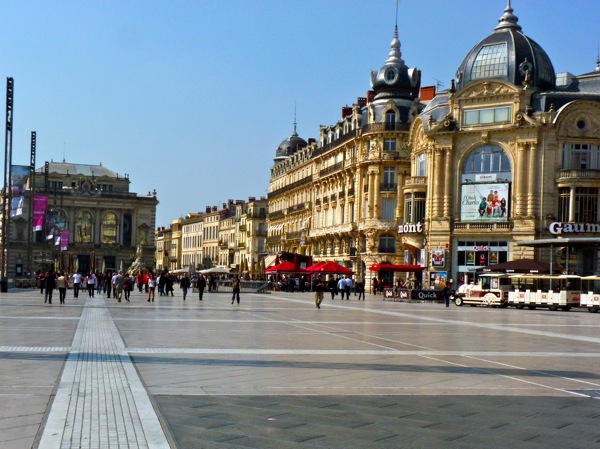 Let’s set the scene a little. Montpellier is the 8th largest city in France, and the fastest growing. It sits centrally on the big bowl of France’s Mediterranean coastline, giving it warm, dry summers and mild, wet winters. It’s a fertile place in all sorts of ways, home to one of the oldest universities in the world, and a school of medicine that’s had a fine reputation since the tenth century. Like most university towns it’s a buzzy, vibrant place with a lively arts scene. Think of Leeds with a better climate and a proper cafe culture.

There’s a real mixture of architectural styles, which you’d expect from a town that’s been a regional hub since the Middle Ages. Winding, narrow medieval streets (not narrow enough to prevent scooterists to pent down them at full throttle, scattering pedestrians and hapless tourists) spill out onto great Napoleonic public spaces like the Place de la Comédie, the main town plaza. The Porte du Peyrou may not be as big as the Arc De Triomph in Paris, but it was there first and frankly, it’s prettier. Similarly, the eighteenth century reproduction of a Roman aqueduct, the Saint Clément Aqueduct, may not be authentic, but it’s pretty bloody impressive when you park your car under it. This is kind of typical of the town. Everything is done with a certain insouciant charm. It hangs together despite the eclecticism, making friends with a sunny grin and a shrug.

TLC have been in Montpellier for a long weekend, visiting good friends. Over the next couple of posts I’d like to give you something of the flavour of the place. With that in mind, next I’ll be talking about food.

Brace yourself, that’s gonna be a long one.

And in the mean time, Clare’s posted a Flickr set of photos that you might care to peruse.