I've never been comfortable with the idea of Elbow as a stadium band. 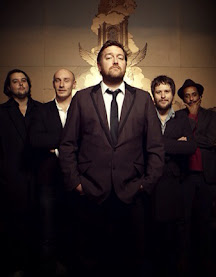 Somehow, I always saw them as occupying smaller, more intimate spaces, where a whisper can hit with as much force as a howl. That's a failure of perception on my part, and flies in the face of all the evidence before me. I've only ever seen them at huge venues, and they've always nailed it.

They are everyone's band now, able to fill the big arenas up and down the country with ease. The trick that Guy Garvey and co. pull off with such aplomb is that they make enormodomes like the O2, where a short tour finished last night, feel more like a Brixton Academy. This is a rare trick, given the scale at which the band now operate, and given the widescreen nature of much of the music from their last two albums, wisely highlighted.

In fact, I can only think of one other band in my (admittedly less than broad) gig-going experience that manage to give music on an epic scale such warmth and approachability. Crowded House use a similar blend of heart and humour, giving a poetic sensibility to the little victories and defeats we all face everyday. Certainly, the best gigs should always be a mix of celebration and communion, and last night Elbow gave us that in spades.

There were end-of-tour shenanigans, of course, which could only help the warm glow. There were cards and cake and singalongs, mexican waves and a birthday. None of this is particularly noteworthy–there will be a birthday at any big gig. But I guarantee not everyone gets a guitar from the lead singer as a gift.

Guy Garvey is, of course, the main focus, an unlikely showman in his rumpled suit and scraggy beard. But he played the huge audience like another instrument last night, focussing on one or two people (the point where he finds the one person singing flat in a stadium-wide singoff is a gem) before speaking without pretence or condescension to all of us at once. He's a warm, avuncular presence who had the room wrapped round his finger from the first notes of the night.

About that voice. It's a gift from the gods, part Peter Gabriel, part John Martyn, a richly expressive instrument. Listen to the way he rolls the word “love” out into the world. As beery balladeer, as football-terrace troubadour, Garvey is one of the finest singers in popular music today. The band he fronts are agile, nimble and sweetly experimental. Listen to Richard Jupp's crazed junglist drum pattern that lifts Grace Under Pressure, one of the surprises tonight, from a simple lullaby into a glorious celebration of the most important emotion of all. Listen to Craig Porter's softly expressive piano work on Lippy Kids, or the angular, wire-sharp guitar of Mark Potter that gives the whole Elbow sound a frame, a structure, a solid support.

Elbow leant heavily on the ballads and anthems tonight; understandable given their newly global exposure, thanks to the Olympics. I'd rather have heard a couple more of their outright rockers, and would cheerfully have swapped out mumbly honkfest Starlings for the banging Neat Little Rows. But then that's me. TLC loves Starlings, and I love the fact that Elbow got away with it and sweet little numbers like Puncture Repair at a gig that should, common wisdom dictates, have been all widescreen all the time. But that's alway been their strength. By addressing the little things we have in common, they speak to us all. As Garvey puts it so succinctly, everyone's here.

Much as I wanted it to be a clear evening, so I could talk about how the crisp cold air made for perfect weather to fly, it was grey and drizzly as we left the O2. We braced ourselves for the queue to the tube and the slow Sunday night trains home. Somehow, that seemed just as appropriate. A quiet reversal of expectations with its own sense of poetry.

2 thoughts on “We Still Believe In Love, So Fuck You: X&HT Saw Elbow”