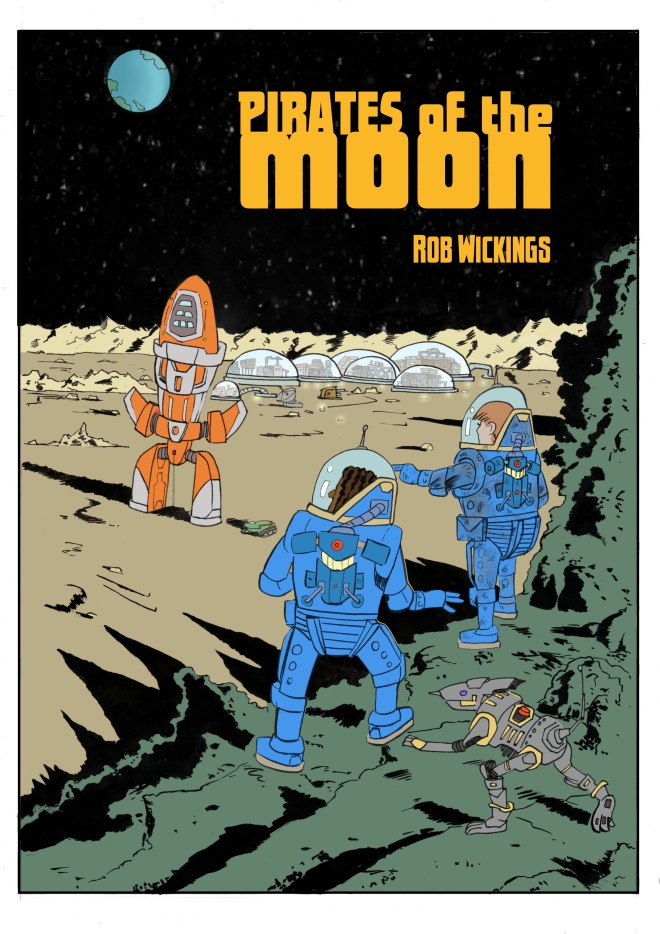 Pirates Of The Moon is my latest novel. Released in December 2015, it’s an unashamedly retro slice of young adult SF. The brilliant Tintin-referencing front cover is by artist Mark Stroud.

Rory Armstrong is in trouble. The ship she pilots, The Foxfire Five, moon freighter, family business, home, has been badly damaged in a meteor storm. She’s forced to abandon ship.

With her younger brother Dash in tow, she crash-lands on the surface of the moon. Supplies are running out and the two are far from help. Worse yet, she finds herself embroiled in a plot by the villainous Janke Van Hoek, who has one aim: to become the Pirate King Of The Moon. It’s a plan in which Rory, although she doesn’t know it, has a part to play.

And there is something else on the unforgiving deserts of the moon with an interest in the young space pilot. Something ancient, and very far from human…

Pirates Of The Moon is a bold, fast-moving adventure in the tradition of classic SF yarns, starring a heroine with the tenacity and courage of Katniss Everdene and Tris Prior.

Pirates Of The Moon is now available to buy as Kindle download or paperback, via Amazon.

Buy Pirates of The Moon here!