My problem (of which there are many, yes, granted, but for the purposes of this post, let’s concentrate on the culinary conundrum) is that I’m frequently in the door late, to be confronted by a hungry Clare demanding scran in a flash.

Now, I don’t do packet food or ready meals, but I’m not averse to the odd shortcut. Like everyone else, I will sometimes resort to pasta and pesto – handy, as this is one of Clare’s favourite things. But I can do better with a little forward planning. I’ll elaborate further on this in the coming weeks, but as a rule of thumb, consider that I take pleasure in frugality. In other words, I like to cook more than I need, and freeze or chill the remains for meals days afterwards.

An example, then. This is the meal I cooked tonight. I was cold, wet and hungry, and running late. Clare is studying again, and has neither the time or inclination to catch up if I’m slacking on my watch. I’ve got to gets me my cook on. 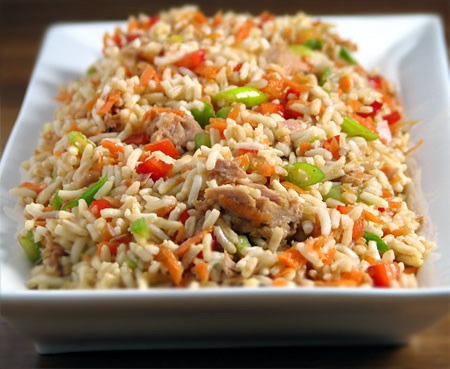 I always have a bag of cooked rice to hand in the freezer. I always make twice the quantity I’ll need for a particular meal, and the rest can be tucked away for when it’s needed most. The rice will defrost in minutes in the microwave.

So. Heat some olive oil (not extra virgin) in a deep-sided frying pan. Into the hot oil, one finely chopped leek and a wilted red pepper. No, it doesn’t have to be wilted. It’s just that mine was. Five minutes gentle cooking, to soften and sweeten the veg. Then scrape ’em out, and keep ’em warm in a bowl.

Then I threw in some roughly chopped chorizo sausage and the last of the mushrooms, again starting to wilt a bit. Chorizo is genius. Sweet, hot, smoky and meaty, it’ll flatter most of the bold-flavoured food I like to cook, and will last for ages in the fridge until it’s needed. It will crisp in the hot pan, and give off spicy brick-red paprika-scented oil that the mushrooms slurp up with abandon. Five more minutes, until the chorizo colours at the edges. Then the leeks and peppers go back in, along with the cooked rice. Mix everything together, and cook until the rice is hot and fragrant with the spiced oil.

If you’ve got any fresh parsley, chop up a handful, then throw it in just before you serve the lot in bowls. If you’re feeling extra hungry, have some tortilla chips on the side for scooping. I don’t think you need it though. It’s cheap and filling as it is. If you’re feeling fancy, maybe add some chicken or prawns. Maybe stir in a spoonful of creme fraiche for a creamier finish. Don’t assume this meal has any pretension towards being a paella or arroz con pollo, though. It’s just quick, cheap grub for a cold winters night.