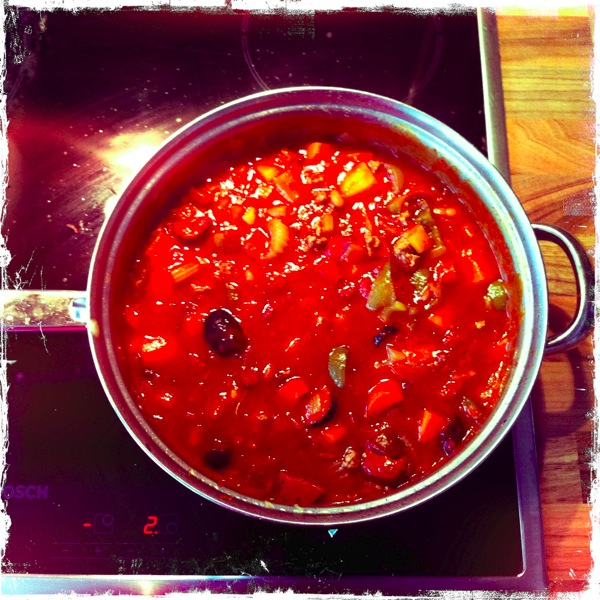 On a weekend when I’m not working, I love to spend time in the kitchen coming up with a slow-cooked stew or casserole. Something with a bit of improv behind it. Jazz cooking. If it uses up some bits and bobs that are looking a bit sad in the fridge, then so much the better. Yesterday’s pot of love was a fine example of the form, so I thought I should share.

Start off with some chunked-up chorizo and lamb mince in a hot pan. I always use my deep saute pan for this sort of thing. It’s got a lid, and the all-metal build means it’ll happily go in the oven. We bought it with some of our wedding money, and it shows no signs of tiredness. Unlike it’s owner. I digress.

The chorizo and lamb will exude their own oil, so once they’re hot and sizzling, decant them to a warm bowl and use that paprika-spiked bounty to cook the veg. In this case, the cajun trinity of onion, celery and green pepper. I usually add some carrots to this as well. Give it five minutes. If you don’t have a beer or a glass of wine in hand by now, go pour yourself one. You’ve done some chopping. You deserve it.

Once the veg have softened a bit and taken on some colour, throw the meat back in, along with a couple of cloves of garlic and the slightly over-done sausage that was left over from breakfast. Let everything get acquainted. Now add a can of mixed beans (usually called three-bean salad or something like that) that’s been drained. After that, tomatoes. A good and lazy tip is to use a posh tomatoey pasta sauce instead. Most of the TV chefs do them, and they’re a good storecupboard standby. The supermarket/ Finest/Best/Taste The Difference ranges are all worth exploring too. I used one with cherry tomatoes and a hint of chilli. It was a very subtle hint. Too subtle for my liking, so I threw in a couple of my dried chilis, pierced but otherwise left whole so I could fish them out when everything was singing from the same hymn sheet.

The mix is smelling great, but it’s pretty dry, so I let it down with some chicken stock. I make my own, but a stock cube is fine. Just watch the salt. About half a pint, I reckon. Hard to tell. It was in a ziploc bag. Enough to cover the meat and veg, anyway.

Let that bubble gently for half an hour with the lid on, then half an hour with the lid off until the stew has thickened to your liking. Taste a few times along the way, and season as you feel the need. Keep an eye on those chilis. Crank up the music. Have another glass. If the weather’s anything like it was yesterday, watch the rain hammering the roof of the conservatory, and listen to the thunder.

When your stew is thick and glossy and delicious looking, fish out the chilis and serve over rice, and a freezer-burned peshwari naan if one happens to be kicking around. TLC thinks they’d be nice with some fruit and yoghurt, and who am I to argue with a girl that’s officially twice as smart as I am? I should have garnished it with some lovage from the herb patch, but buggered if I was going out in that weather.

If you’re lucky, clever and not too greedy, there’s enough stew left over for your dinner tomorrow too. Sometimes, improv is the way to go.

The soundtrack for the meal should really be the OST to season one of Treme. Lots of groovy N’Awlins jazziness. Perfect when you’re cooking up a storm. Or in a storm.