Making graffiti is like playing the guitar. It’s very easy to pick up and do very, very badly. Getting it right and creating something that people might find pleasant to the eye takes a lot of skill and practice. I discovered this for myself when that damned elusive DocoBanksy lured me down to the free-spray zone at Leake Street, near Waterloo, to do a bit of promo work for his film.

Turns out he had a much more realistic idea of his skill level and the likely end result than I did.

First, find your paint. Chrome And Black on Bethnal Green Road specialise in spray for the street art community. They stock a dizzying range of colours, along with markers, fine-control caps and all the paraphernalia a budding writer could possibly need. More importantly, they’re friendly, approachable and the paint is half what you’d pay in other art shops. All the paint is caged up, but that’s a sensible precaution. A 400ml can is an eminently nickable item. We left, cackling, with a bagful of potential.

A quick stop at a local builders merchants for face masks and gloves, and we’re in the Docomobile heading for the South Bank. Leake Street was the venue for the 2008 Cans Festival, a street art showcase curated by Banksy. Since then, it has become a place where writers can practice their skills legally and without fear of trouble. The work runs the gamut from simple tags to huge, complex wall pieces. There are no boundaries, and no elitism. Like all street art, you get the work up, you document it, and then you leave it to the fates. Typically, you can expect the walls of Leake Street to look totally different from one week to the next, and even the most beautiful work will be very quickly tagged and painted over. No sense in being precious about it. Do it, shoot it, move on. The impermanence of street art is one of it’s most attractive aspects. Collectors that take the plaster with a Banksy on it off a wall to sell at auction are massively missing the point. It isn’t supposed to last.

Me and Doco, off on a spree, s.p.ra.y.i.n.g. We park up, offload, and walk over. Doco chose Tuesday afternoon to do the deed – a bit quieter, he reasoned. It wasn’t that quiet. Leake Street has become a tourist stop, as well as a cut-through from the far side of Waterloo Station to the South Bank. There are always people with cameras there. Gods know, I’ve been one enough times.

Cans out, and we quickly realise we’ve made a massive mistake. Graf works in the same way as painting – you lay down a base colour, and detail and outline go over the top. But the two black cans we’d bought for detail work were fat, high-output units, firing off a line as thick as a tennis ball. We would have to work big and broad, and any finesse would have to go out of the window. My carefully-honed sketches had to go back in my pocket. I simply didn’t have the tools to do them justice. There were a couple of pieces that were homages to Basquiat, and I figured that I could go modern primitive. There would be a rabbit on the wall, but he would be more of a totemic object than a slick piece of graf.

We whitewashed an area under the walkway that didn’t have anything too nice on it, and set to work. Doco, embracing his skill level, had chosen a simple, blocky 80s style font for his piece, and the base went down quickly in bright red and Joker green. Wisely, he worked big. His piece was getting on for seven metres long. I, miniaturist in comparison, placed a bunny in orange and silver next to him, perhaps a metre square.

There were tourists in the tunnel, and we were soon noticed. A bunch of middle-aged ladies, tasting a little urban danger. “They’re actually doing it!” one gasped. They politely asked us for photos, and we gravely allowed it. Inside, we were giggling like 8 year olds.

Once Dom had blocked, I outlined, being as gentle as I could with the thick black line. It’s funny stuff, spray paint. The subtlety of line you can get is surprising, even as a rank amateur. Of course there were dribbles and overspray. It was the first time I’d picked up a can in anger. 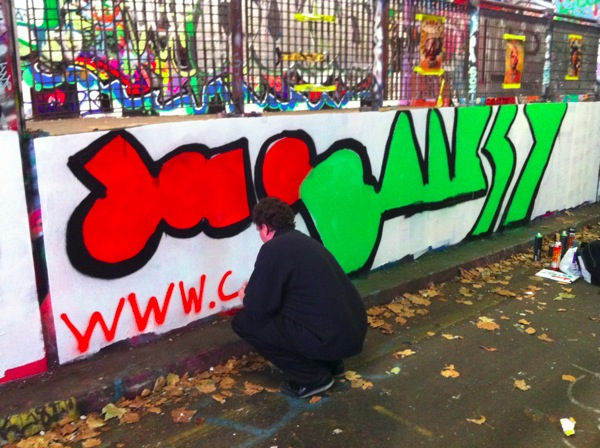 We worked simple. We worked fast. An hour after we walked into the tunnel, we were done. Our two pieces were nothing like I imagined, but somehow had a robust, chunky charm. Usefully, they also looked better in a photo then they did on the wall. Somehow, a bit more skilful, deliberately cartoony. We had documented well, with two video cams on the go and plenty of photos. It was time to leave our first attempts at graf to the fates and the taggers. We ambled off to get a pint, and toast our efforts. 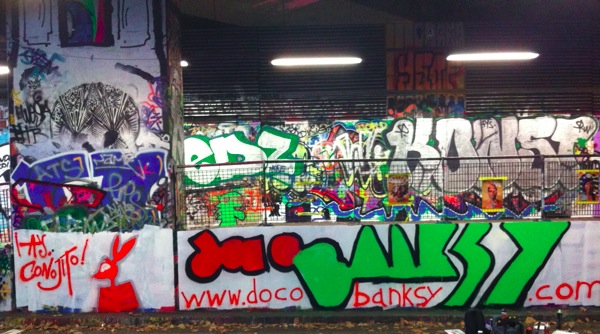 Now, of course, I can’t stop thinking about the mistakes I made, the heavy hand with the spray, the things I could have done, the things I should have done. But not in a bad way. Because the phrase that keeps popping into my mind, the thought that simply won’t stay quiet is this: next time.

Skin is a porous thing, and it’s easy for paint to get under it. I’ll be back, Leake Street. Oh yes. I’ll be back.