It was sad, but not really surprising, to read about DC Thomson’s decision to finally shutter The Dandy. It must have been a decision that the normally pragmatic Scottish publisher was putting off, knowing just how unpopular it would be. Was it coincidental that the announcement came out the day after the end of the Olympics, when everyone was still in hangover mode? No, I like to think they chose their moment well.

The sad thing is, of course, that with the exception of a small core of comics nerds and nostalgists, it’s unlikely anyone really cared. As for The Dandy’s target audience–the ugly truth is that they moved on years ago.

As DC Thomson withdrew The Dandy from the rolls of the British Publisher’s Association, it became clear just how unloved the comic had become. It had a readership of just 8,000. It’s a fool’s errand to compare this figure to the Dandy’s heyday in the 50’s and 60’s, when it regularly sold 2 and a bit million copies. Publishing is a very different game these days, and a magazine editor would gnaw off their own arm for a chance at a distribution figure of even half that. But the book had been shedding readers at a disastrous rate for years, despite the best efforts by the publisher and editors to retool it for a modern audience. A reboot as a fortnightly title, Dandy Xtreme, in 2010 didn’t help. Nor did the appearance of TV celebs like Harry Hill and Cheryl Cole as recurring characters. The readers kept slipping away, off to the internet and the tellybox. The announcement of the paper’s disappearance never even made the mainstream press (at the time of writing, anyway).The poor old Dandy never had a chance, really. 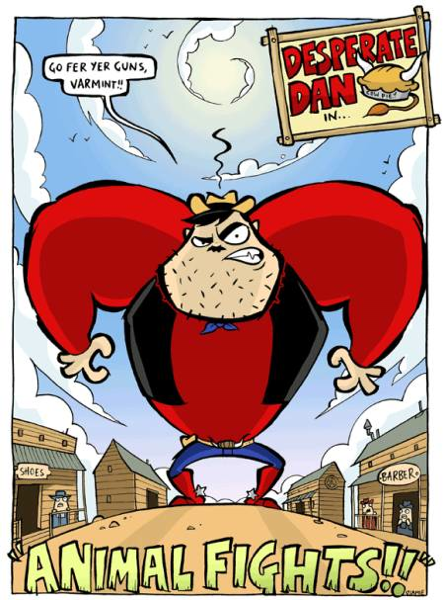 Actually, that’s not entirely true. The companion paper, the more famous Beano, still pulls in 365,000 readers, and it’s likely that some of the Dandy’s more popular characters will reappear there. The Beano seems to be able to connect with a modern audience in a way that The Dandy couldn’t. But Britain’s second-favourite comic didn’t do itself any favours. It was increasingly difficult to find in the shops–a fault that you could put on DC Thomson quietly putting the title to sleep, or on the shrinking shelf space newsagents offer to comics (which still doesn’t explain why the Beano is doing so well by comparison). The Dandy’s online presence remains inexcusably awful, though. Their website only offers comics for sale as clunky zip files, and up until late last year, there was no easy way to read the paper on the web. This is just plain dumb in an era when many kids have access to pods and pads and PCs. In the month when my beloved 2000AD rolled out a widely acclaimed app for the iPhone and iPad, it really feels like Thomson did too little, too late to bring The Dandy properly to a 21st century audience.

It’s doubly sad because the content of the paper was going from strength to strength. The editors were prepared to push boundaries and be playful, trying out risky stylistic strategies with the art. Jamie Smart’s take on Desperate Dan is more overtly cartoony than the traditional image of the cow-pie eating cowboy, chunky and economically drawn. But that buttress of a jaw is instantly recognisable. Smart by name, smart by nature; his Dan stories are solidly constructed and goofily hilarious. Likewise, talents like Steve Bright brought their effortless touch to strips like Beryl The Peril, updating them while keeping their anarchic edge. The paper, when you could find it, was a fine example of British comedy strip story telling.

I wonder just what proportion of that last 8,000 readers were kids, and how many blokes of a certain age who simply couldn’t bring themselves to stop reading it. There’s already been woeful scenes on Twitter as people bemoan the loss of a childhood favourite. The release of an expensive coffee table book on the art and history of the Dandy only strengthens that. It’s the sort of posh, pricy volume that you wouldn’t allow within scribbling distance of a sticky-handed child. Like the fall of Woolworths, if you pushed the nostalgists, I bet you they would remember little about the paper, and certainly wouldn’t recognise it if presented with a copy of today’s Dandy.The sad fact remains that, even in it’s 75th year, a milestone that made it Britain’s longest running comic, there simply wasn’t the interest anymore.  Perhaps DC Thomson are right, and it’s time to take the best of it, along with all our fond memories, and move on.

So long, The Dandy. See you in the funny papers.

(Some images are courtesy of Lew Stringer’s most excellent blog, Crikey! Essential reading if you’re a British comics fan.)

2 thoughts on “The Death Of The Dandy”