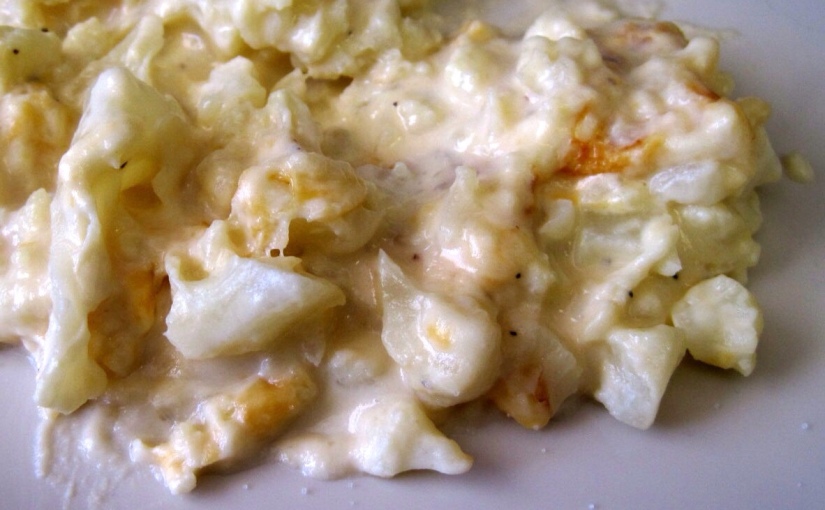 I love food. I love writing. Why shouldn't the two mix? 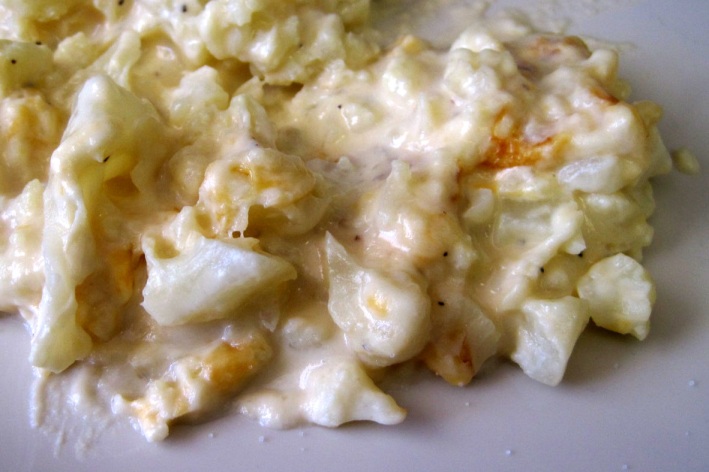 Well, to be honest, they used to. Search X&HT under “fodderblog” and you'll see how much I used to write on the subject. It's down to me that my food writing has slid down to nothing, and there's no real reason why it can't start back up again. Certainly, LMC has nagged me about it. So, in the interests of keeping him happy (and quiet) I'm going to write about food more on the blog.

To ease ourselves in, here's a lighter take on a classic, as created by Jamie Oliver, tweaked slightly for logic's sake. It's comfort food without the heft: something I think we can all appreciate in the post-Xmas doldrums.

Take a cauliflower, broken into florets, and a couple of handfuls of macaroni (penne will do at a pinch, rigatoni is the right shape but too big in the beam for this recipe) and pop them into a big pan of boiling water for about 10 mins, until the pasta and veg are tender. While that's happening, preheat your oven to 200C, and grate about 200g of cheese and a clove of garlic into a bowl. Then mix the best part of a small tub of creme fraiche into the mixture. You want a rubbly, thick-textured paste that, to be honest, you could spread on toast and grill if you fancy it.

Once your cauli and mac are done, drain them, hanging onto the cooking water, and slop them into an oven-proof dish. The cooking water is loaded with starch from the pasta, and makes a great sauce base as long as you're not too heavy handed. Add a couple of spoonfuls at a time into the cream cheese mix, until you get something that's about as runny as single cream. Somewhere between a half and a pint should do it. You don't want to go too heavy. The sauce will thicken a little more in the oven*. Then let the sauce meet the veg and pasta and mix the whole lot together. Grate a little extra cheese over the top (parmesan's great if you have it, but whatever's around is fine) and shove it in the oven for 10-15 mins until the cheese is golden and the sauce is bubbling.

Shove in your face, declaiming on your genius at every mouthful.

Right, tweaks. As it stands, this makes an exempalry side dish for anything grilled, fish or meat. But you can make it your own, and into a standalone meal (maybe some buttered bread on the side to scoop up the last of the sauce) without too much effort. Jamie recommends cooking some bacon in the dish that the cauli and mac go into, ovening it until crisp while the veg is cooking, and then blitzing it with some breadcrumbs to go over the top. The breadcrumbs are a great idea, but I'd just chop the cooked bacon into bits and scatter them into the cauli-mac mix before the sauce goes on. Cooked chicken works well (this is a great way to use up meat from the weekend roast), and I have a hankering to see what some smoked haddock would be like, chunked raw then cooked in the creamy sauce (I guess you'd need that sauce to be a little bit looser than usual). How about tipping a half-teaspoon of mustard powder in with the cheese and cream for a more warming finish?

This is a dish that will get you rethinking cauliflower mac and cheese, moving away from the dense blanket of white sauce towards something a bit lighter and more flavoursome. It's utterly moreish and much easier to make: no tedious mucking about with milk and flour. One to bring you back from the brink after Christmas has kicked your ass.

*You could, as Jamie does, simply mix the water and cheese mix into the dish with the cauli and mac in it. My method means you have a little more control over the consistency of the sauce.