A spin round the supermarket yesterday brought me face to face with Jack Monroe. 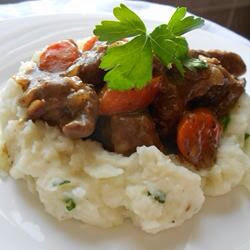 Not the girl herself, although I’d be delighted to meet the face of smart, frugal cooking. Her book was on offer, so how could I resist? Into the trolley it went, along with a ton of other food. In my defence, it was the monthly stockup. There was a lot of grub for two people, though. We’re a greedy pair. Worse yet, the cat don’t eat supermarket food. Yes, she’s spoilt. She’s also plump, healthy and affectionate. We apologise for nothing.

The monthly shop means that there has to be a clear out of the old to make way for the new. If I’m smart, then I’ve organised it so that I can make something half-decent with the leftovers and little goes to waste. Taking a cue from Ms. Monroe, I’d hit the reduced sections and found a pack of veg for soups and stews at half price. That, teamed with a few bits and bobs, and a little inspiration from my new cookbook, meant that we ate very well last night.

The aforementioned stew pack (leeks, carrots, parsnip and swede, in dice so I didn’t have to chop anything) went into a hot pan with some oil and butter to sweat. While those little beauties were filling the kitchen with good smells, I sliced an onion and set that to cook gently in another pan, with a lid. Juuuuust a touch of oil on this.

The last of the week’s sausages went under the grill to brown and mellow, and a good half kilo of spuds went into the rice cooker to steam (yes, really). Half hour on the timer. Now we have a deadline.

After about fifteen minutes, the stew veg were sweet and golden. They were joined by the half jar of pasta sauce TLC had started earlier in the week, the remains of a bottle of red wine that I’d started the day before (about a glass full) and some fresh thyme. Top tip: I always put the wine in the empty jar, lid it and schoosh it about, getting all the bits of sauce off the sides before dumping it into the pan. That way, you get every bit of flavour and value out of a pricy food item.

Time check. The spuds needed another ten minutes, and I kept a careful eye on the bangers. As soon as they were golden, they went into the sauce to bubble and gloss. The onion, ticking away in its own juices and steam, was doing fine–soft and sweet.

Once the spuds were done, it was time to build the meal. They stayed warm in the steamer while I dumped the remains of a pack of kale in with the onion, and clapped the lid back on. It took five minutes to cook down. Just enough time to rice the potatoes with a bit of butter, milk, salt and pepper. The kale and onion mix went in, everything had a stir about and vwallah, colcannon, bitches.

Then it was just a case of piling it onto plates, propping sausages attractively on there and topping with a generous spoonful of the sauce. Oh how we filled our traps, Readership. Oh, how we hoovered it up.

And here’s the thing. There is enough colcannon left to make potato cakes or farls. There’s enough sauce left over to dump onto pasta, maybe with the cheeky addition of some bacon. Actually, throw in some lentils and that’s a full meal with some warm bread.

Cooking with an eye on the leftovers in your fridge, or with a plan to make something with tonight’s leavings, makes you a more thoughtful and frugal cook. The meal I’ve just outlined was made exclusively with cheap ingredients and the stuff I had to clear out of the fridge. It was healthy and full of flavour, and gave us the makings of at least two other meals. I like to think that Jack Monroe would approve of that.