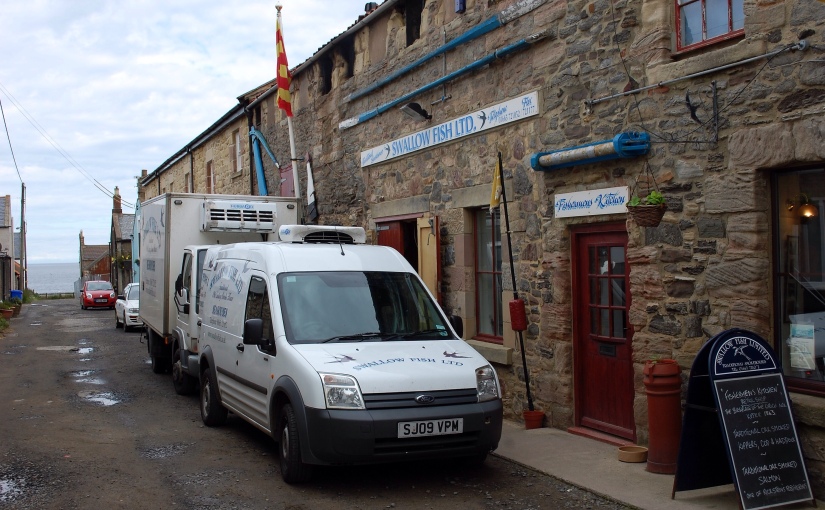 It takes six hours, if you're prepared to drive with little in the way of breaks, from the gates of X&HTowers to Seahouses, the jewel of the Northumberland coast. Readership, I'm here today to tell you: it's worth the trip.

Seahouses is a pretty wee fishing port, bustling with tourist trade, great pubs and at least four chippies within 100 yards of each other. It's a great starting point to explore this lovely bit of the country. Seahouses is about half an hour south of Berwick, which is effectively the closest point of the English-Scottish border. These territories have always fascinated me. They're the places where cultures mix in strange and intriguing ways. You're as likely to hear a soft Lowland burr as the rounded warmth of the Tyneside tone. As for the food… well, the beef and cheeses are monstrously good, and you can get haggis and chips, if you have the mind, with very little effort.

But Seahouses in particular has found fame in culinary circles (if you ignore the Hairy Bikers' endorsement of Pinnacles fish and chip restaurant) for its smokehouse, one of the few remaining in the country, and most certainly the oldest. Swallow Fish, praised by Rick Stein in his Food Heroes series, is tucked in a tiny side street away from the harbour. It's been there, puffing away like an old lag on a Rothman's, since 1834.

If you don't know where you're going, you'll need a map. When you get there, you'll know. There'll be two signs. Firstly, the sweet-salt aroma of the smoke. Secondly, the whacking great queue that spills out through the shop's low-lintelled front door. It's a popular place even late on Saturday afternoon, when we finally made it up to the counter.

We were lucky. There was local crab, that we had for tea that night with pea-shoots and some fried potatoes, but luckier still in that we snagged the last three kippers in the shop. These are the reason to make the trip, and I guarantee you will not breakfast on a finer bit of smoked fish… on this side of the border, at least.

I completely get why people are put off by kippers. The fishy smell when you grill the little beauties will linger for days, the bones that are a nightmare to pick out. To the latter: filleting will remove the backbone, but the fine hair-bones will remain. Frankly, I just chew straight through them. They're barely noticable. As for the smell: grilling doesn't do kippers any favours. It dries 'em out. Better to jug them.

This is as easy as boiling a kettle. Pop your kippers in a jug (you already see where I'm going with this, doncha?) and pour over boiling water, leaving enough of the tail free so you can hoik them out. Six minutes, and you'll see the kippers plump up and uncurl, and some of the oil will float free, leaving burnished pearls on the surface of the water. That's it. Take 'em out, drain, and serve with plenty of fresh bread and good butter.

Swallow Fish kippers are sweet, salty and smoky all at once, with a dense texture that gives the flesh bite. It's umami personified, a savoury smack to the senses that wakes you up in a trice. Breakfast of champions.

Of course, if you still can't bear the thought of a morning kipper, then the smoked fish works brilliantly in salads with a smartly acid dressing, or as a pâte. I can offer you another alternative, which I've ganked with apologies from L. Robson and Sons in Craster, just down the coast from Seahouses, another smokehouse that's well worth a visit. Try this on for size:

Butter the hot toast generously and add a dash of Worcester sauce.

Mash the kipper fillets, and stir the cream in. Add the cheese to taste (about a teacup).

Spread this mixture onto the toast, and grill until the cheese bubbles. Serve hot, with long glasses of ice cold Newcastle Brown Ale.

If you want to really amp up the smokiness, there's plenty of great oak-smoked cheeses in the Northumberland area to try, but any decent mature cheddar will do the trick. Maybe substitute creme fraiche for the heavy stuff, but hey, they're your arteries.

However you try them, you really must give these little darlings a go. Bronzed and lovely, glistening on the plate, these are not your boil-in-the-bag uglies. An absolute delight from a part of the country that is filled with joys and wonders.

We have been in The North, and I think I need to go on a diet.

Swallow Fish and L. Robson will both deliver to your door, should the notion of a six-hour drive to pick up some kippers not sound appealing. Frankly, I think you're missing out.