If you ever wondered about the value and power of political cartooning, wonder no more.

In France’s worst terror incident in decades, twelve people were shot and killed in and around the Paris office of satirical magazine Charlie Hebdo on Wednesday. These included the editor, three other legendary cartoonists (Cabu, Tignous and Wolinski), and the two policemen assigned to their care and security. The gunmen left the scene shouting “we have avenged the Prophet”. The religious motivation for the crime seems clear.

Islam and Charlie Hebdo have history. The magazine, a mayfly in the face of many respected institutions, did what satire is supposed to do: poke, prod and annoy, all the while showing up the ludicrous hypocrisy and doublethink at the heart of said insitutions. Their robust attacks on Islam, which included pictures of Mohammed in the nude and a fundamentalist kissing Hebdo’s editor, had them up in court on numerous occasions, facing accusations of racism. They won more often than not. Free speech in France is scared, and it wasn’t as if the magazine was just hitting Islam as a target. Hebdo was cruel and provocative towards everyone: Catholic, Christian, left, right and centre politics – if it needed its bubble popping, Hebdo was there with a sharpened pencil.

How are we supposed to react when we come across a drawing that we find offensive? Do we fire off an angry letter? Do we threaten to sue? In the age of Twitter death threats and doxxing, do we publish the cartoonist’s home address and bank account details? To the staff of Charlie Hebdo, that would have been laughable. Their offices were firebombed in 2011, and there was a constant police presence at the door. They knew what they were up against with every picture.

They knew, and they did it anyway.

Cartoons have always been a great way to get a message across with economy and startling efficiency. The power of a well-crafted image cannot be exaggerated. For the fanatics who saw Hebdo as a threat, cartoons are especially dangerous. They dance past the ban on figurative art, while passing on a message of defiance that transcends language barriers. A good cartoon can hit home in the way that a well-written article simply can’t, particularly in areas where literacy is less prelavent than it should be. Since the graffitti of Roman times, people have used pictures to poke fun at figures of authority. Nothing’s changed. Sadly, it looks like the dangers involved in that simple act of protest are still as real as ever.

The protests in cities across the world, with thousands of people holding up pens in memory of the fallen is, I think, an image that the cartoonists of Charlie Habdo would have found hilarious. I don’t believe they viewed themselves as heroes, despite editor Stephane Charbonnier’s claims that he would rather die standing than on his knees. It’s a vainglorious quote that pokes fun at the image of a martyr–a mantle that he now may be donning whether he likes it or not. If his murderers wanted to scare cartoonists into silence, it looks like they’ve failed. A tidal wave of ink has risen in the last day or so, images of support, grief, mourning and defiance.

We need to understand that political cartoonists are journalists with a unique skillset. They can pinpoint an issue, condense it and deliver it with just a few lines of ink and the sweep of a brush. One worrying trend over the past few years is to treat journalists as targets in the cultural war being waged across the globe. 60 journalists were murdered last year. Half of those were Muslim. The people who aim guns at journalists don’t discriminate in terms of the faith of the man or woman behind the pen. They simply want them silenced. It’s imperative that we make sure the killers know that they will always, always fail.

Charlie Hebdo’s scurrilous and provocative pieces are not to everyone’s taste. That’s fine. The work that the magazine puts out is often crude, veering wildly from caricature to stereotype. But no matter what you think of the cartoons, Hebdo have the unassailable right to put it out there. If it provokes debate, so much the better. But no drawing, however blasphemous or offensive, should be the trigger for murder. There are some voices in the press that claim Charb and his fellow inkslingers somehow deserved what they got. They, too, have the right to say that. So I’ll simply respond to them, and the people that thought that the right to reply extended to a death sentence, with a drawing. It’s been the first time in a while that I’ve picked up a pen. It’s terrible that it takes a tragedy on this kind of a scale to inspire me to do so. 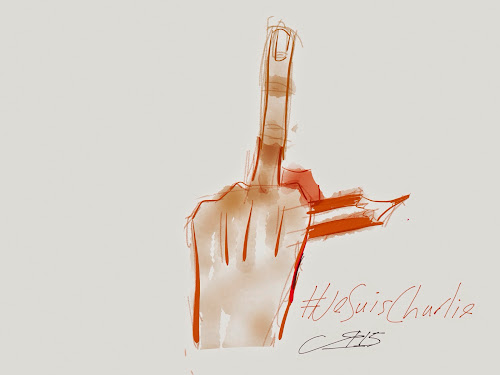