I feel like I’m in a very lonely place at the moment.

I must be, if the reviews and Twitter snarks are anything to go by, one of the few people who thoroughly enjoyed Jupiter Ascending, the new sci-fi romp by the Wachowskis. It’s been decried as pretty but empty-headed, dull and silly.

That’s not the film I saw, and I feel Jupiter Ascending needs someone to bat for it. Looks like I’m going to have to step up.

[From hereon in, consider Spoiler Alerts to be at RED.] 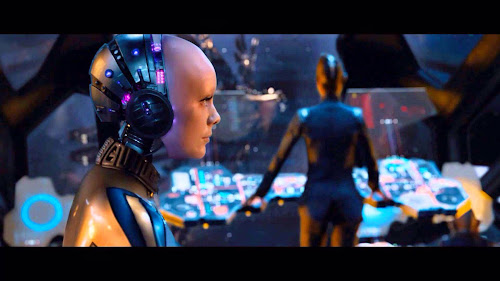 I have been a science-fiction fan for a very long time. Allow me to give you some sense of the scale we’re talking about here: I remember going to the cinema for Saturday morning shows that would include a Children’s Film Foundation feature, a cartoon and most importantly, an episode of Flash Gordon. In fact, when I was a youngling, Earth’s blondest hero was everywhere, shown regularly on kid’s TV. I developed a real love for this shonky, cheap but thrill-packed show. Flash Gordon is an ur-text for me, one of the cultural signifiers that would inform my tastes to this day. That’s why, I guess, I keyed in so strongly to Jupiter Ascending from the very beginning.

Because it’s a very cleverly constructed and loving tribute to the absurd, crazy world of pulp sci-fi in all its aspects.

The universe in which Jupiter Jones (I could spend another piece just discussing how appropriate that name is in context–let’s just say for now I’d be very surprised if she didn’t have a distant relative who’s a whip-wielding archeologist) finds herself is 30s SF to the bone. It’s ruled by corrupt royalty who see nothing wrong in using their subjects as they see fit. If this means distilling them to make a cure for old age, so be it. The Abrasax Family are merciless creatures, who take their cues from the Tudors. They are obsessed with only two things: power and bloodline. One ties neatly into the other. The balance is finely tuned, trembling always on the edge of collapse.

Notice my use of the word ‘merciless’ there. This is Ming’s universe, a place where absolute power has corrupted absolutely. The Abrasax siblings have been alive for millenia, and are no longer human in any meaningful sense of the word. Eddie Redmayne plays Balon perfectly in this regard: still as an insect, and as free of any compassion. He looks pickled, badly preserved, like taxidermy gone wrong. His voice, a sick whisper, is the ghost of the real thing. Balon and his family are monsters, much like Ming, for the simple reason that they have forgotten what it means to be a part of the human race.

This is a universe of excess, of floating starship-palaces with chandeliers lighting the docking bays, of a visual aesthetic that clashes Egyptian, pre-Revolution France and Gothic design cues into a garish, eye-melting display. It’s also home to a dizzying array of post-human ‘splices’: dog-soldiers, mouse-guards, elephant-pilots. Dr. Moreau’s dream brought to life. If this film was nodding any harder at the universe of Flash Gordon and its beast-men, its head would come off.

Into all of this comes Jupiter Jones, a girl who holds the genetic key to upset the Abrasax’s carefully-maintained status quo. She’s the fuse that lights the powder keg, and like Flash is largely the victim of circumstance. She’s both pawn and player, an outside influence in a sealed world that doesn’t quite know what to do with her. Apart from use her as a weapon, of course.

Flash Gordon would recognise this set-up: his ability to punch his way out of situations makes him a useful tool for pretenders to the throne like Prince Balin. Jupiter’s attraction is more subtle: her DNA gives her power, and her marriage to Abrasax scion Titus is a purely political act. There’s no love in it: the wedding is a means to an end. Again, we see that link to Tudor-style power-plays. If you’re a man, your ability on the battlefield gives you the edge. A woman has more subtle, but no less deadly tools at her disposal (although Jupiter does use more direct means at the end of the film, beating Balon to a pulp with a lump of piping: this girl is a warrior too). Emperor Ming understands this perfectly, using his daughter Aura as both bait for the love-lorn Balin and a spy. When she becomes disloyal, when she dares to try to make a life that does not mesh with his plan, then he is appropriately merciless.

Let’s step back a little and see what we have. A gilded and utterly corrupt world, ruled by cruel and inhuman creatures, is rocked to its foundations by a humble outsider with the heart to do what’s right. That’s Flash Gordon. It’s also, of course, Star Wars. George Lucas would be the first to admit the debt his story owes to Flash. It’s also telling that a lot of the accusations levelled at Jupiter Ascending can equally be pointed at Star Wars: good-looking but silly, old fashioned, terrible dialogue, wooden acting. None of which really matter as long as you follow the most important rule: don’t be boring. Jupiter Ascending has its faults. But it’s not a dull film by any means.

While watching it, I was reminded of the movies that share its DNA: Dune and The Fifth Element, and TV shows like Farscape and Lexx. Big, bold, brave chunks of pulp that aren’t afraid to be weird, camp, embracing the absurdity at the heart of space opera. I was raving about this film to an unconvinced colleague, who said “Yeah, but you’re biased, Rob. You liked John Carter too.” He’s so right. I will argue till I’m Mars-red in the face about the virtues of Andrew Stanton’s much-maligned space opera, another ur-text that goes back even further than Flash Gordon’s comic-book adventures across the moons of Mongo to the deep roots of SF. Maybe it’s me, and I’m simply hard-wired to like this sort of movie. I’m disappointed, of course, that more people can’t find the simple joy in a film like Jupiter Ascending. But ultimately, that’s their loss. Like Jupiter’s dad at the start of the film, I am transfixed by a starry night sky, wondering at the secrets and miracles strewn jewel-like across the darkness. I too dream of the adventures that play out in that most expansive of stages, of hurling a fragile craft out into the void, to take my place amidst the glorious and the strange.

If you’re going to dream, you should always dream to the limits of your imagination. First star on the right. Straight on till morning.

4 thoughts on “Jupiter Ascending: In Defence Of Space Opera.”