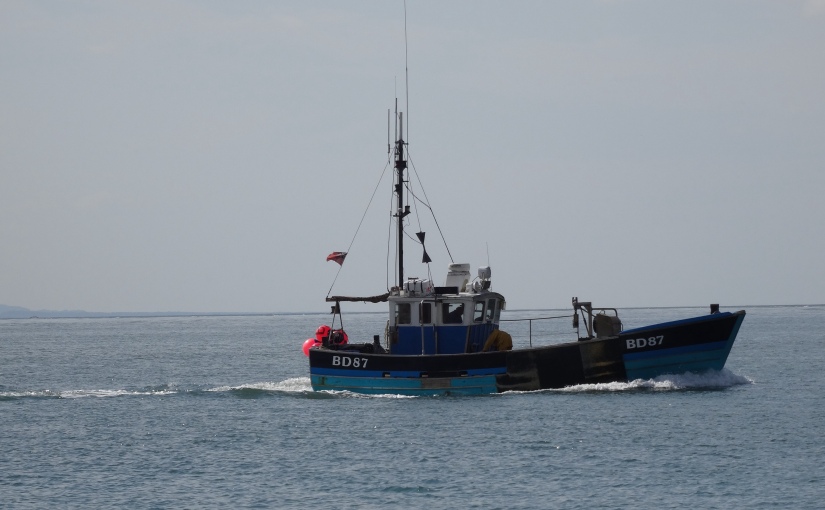 If you're a foodie, Britain has some amazing places to visit. Scotland is a cornucopia of bounty, from salmon to beef to whisky. Welsh lamb is the world's best, and the welcome and scenery are pretty tidy too. The seafood in Cornwall blows most other places out of the water.

And England, dear England. TLC and I have eaten our way around the country. From Northumberland, breakfasting on that morning's kippers, to rural Shropshire and Ludlow, the beating heart of English grub. We've seen it all, and loved it all.

But there's an English secret when it comes to amazing grub, and I'm here to reveal it. Hands up who thinks of the Isle Of Wight when you consider great British grub?

OK, some of you may already have something to say on the matter. Yes, the Isle does have a rep when it comes to a certain pungent ingredient most kitchens would suffer without. But there's much more to enjoy. Especially as the island itself is only just waking up to the realisation that it has so much on its plate.

Let us consider the Isle Of Wight. A diamond-shaped island in the Solent, about 4 miles off the Hampshire coast, small enough to cycle from nose to tail in a day. It's drier and warmer than the mainland, with a microclimate centred around the southern town of Ventnor that's basically a Mediterranean suntrap. This means the island has a longer growing season and better weather than some parts of Northern Spain.

With fertile land and perfect growing conditions for a whole host of goodies, it should be no surprise that the Isle Of Wight is a bit of a food basket. It's lush and green, with sheep and cattle grazing on every hillside. The local asparagus is as fresh as you get (and disappears bloody quickly–find a good local deli and be prepared to snag every bunch you can lay your mitts on).

The food culture is pub-centric, which always pleases me as I get to try out local ales alongside my fresh-caught fish or local lamb. There are three breweries on the island, and it's rare that a hostelry won't have at least one of their beers on offer. If not, never fear: Goddard's and Island Brewery have a solid bottling operation, and you can pick up a little of what you fancy in most shops. Goddard's Ale Of Wight and Fuggle-De-Dum are personal favourites, but as between them the three breweries have fifteen ales on offer you have plenty of opportunities for research. They even have a mini-beer festival in May, in the grounds of the local steam railway museum. And let's not forget Quarr Abbey, whose Benedictine monks brew their own delicious take on Belgian Trappist ales.

Viniculture is also taking root on the Isle Of Wight. Adgestone and Rosemary Vineyards produce cracking whites and sparkling wines, unsurprising given the similarity of the terroir to the Champagne region. They're small but growing businesses, who offer a great range of juices and vinegars alongside the more traditional offerings.

And then, of course, there's garlic. Brought over by Free French troops stationed there during WW2, the stinking rose flourishes in the island's rich soil. Now The Garlic Farm is the success story of food on the Isle of Wight: 80% of garlic grown in the UK comes from the fields around Newchurch. It's a tourist destination in its own right, with a brilliant restaurant serving all sorts of garlicky goodies. I can heartily recommend the hot dog, as long as you don't have any heavy activity planned for the rest of the day. The gift shop is one I found difficult to leave. TLC and I are going to be vampire-free for a while.

The island has its own pace of life, slower and less keen to impress than many food destinations in the UK. Chatting to locals, we quickly came to realise that it's taken the Island a while to wake up to its true potential. Eateries like Salty's in Yarmouth, and the amazing Red Lion in Freshwater are only now offering the simple, locally-sourced grub that foodies like me crave. Delis are starting to pop up, but they're still comparitively rare. Wierdly, the best place to source locally caught meat and fish is The Co-Op. That, I'm sure, is in the process of changing. To be fair, I didn't get a chance to check out the one Waitrose on the island. I bet that's got some treats.

We knew, going into it, that there was going to be some good eating on the Isle Of Wight. We were not disappointed. It's a place that's coming into its own as a food destination, and with easy access via the ferry, not a pain to get to, either. We're already making plans for our next visit.

And I've not even mentioned the history and culture of the place yet. That's a whole other blog post…