Adventure is only ever the turn of a wheel away for the Clan Of The White Buffalo. We were acclimating to the opening section of the Rocky Mountain National Park before hitting the Trail Ridge Road, when Hawkeye spotted a turn-off for a place called Adam’s Falls. We like us a waterfall. In we went.

The problem was no-one was really dressed for what developed into a mile-long hike up a rocky and uneven path. Lady Red was in a pair of flappy Birkenstocks. She was mildly scolded by a ranger for the inappropriateness of her footwear. We all pointed at Hawkeye, who put on his innocent face. Which fools no-one.

The Falls were worth the scramble. Clear water boiling in a surge around a ninety-degree cut in the rock face, a good thirty feet below us. Utterly spectacular. Stretch was having the time of his life, hopping about like a jumping bean from rock to rock. He managed to straddle the flow further up the falls when the shoreline dipped down to meet the water, perching on a beaver-dam like a forest pixie. 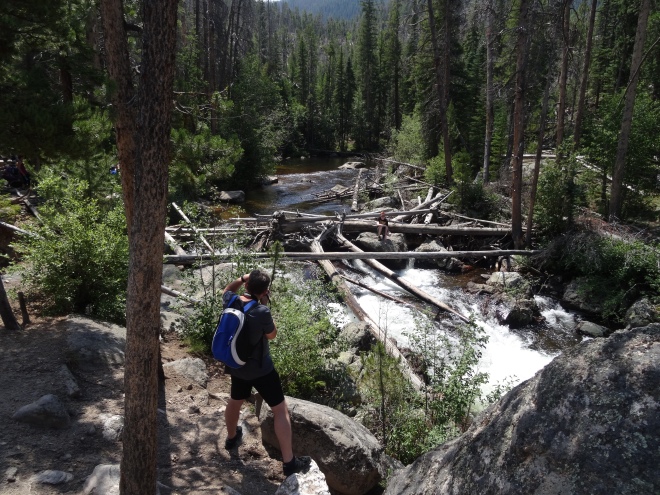 As we stumbled back to the Buffalo, I realised that we’d left Lady Red behind, and I circled around to find her. She had found a place where the river had calmed, and you could stand safely in the stream without being swept away to a watery end.

I couldn’t resist. I pulled off my shoes and joined her.

The water was diamond-clear, and cold as a politician’s handshake. My feet, which had been quietly steam-baking in the heat in the trail, tingled and came back to life. I had to hop from one to the other. It was too cold to stand with both feet immersed.

It was utterly delicious, and a wrench to shake off the water and rejoin the party. I made a vow to myself there and then. This would not be the first time I was baptized in the clean waters of the Colorado River. 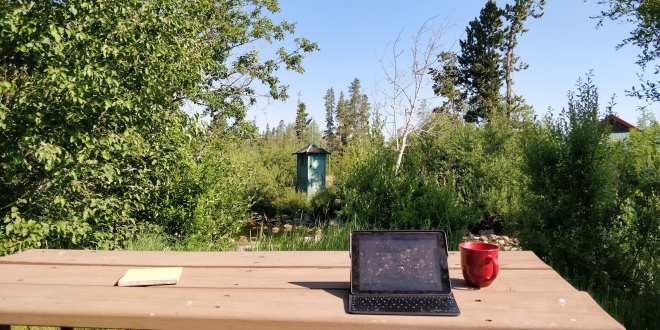 It turned out I didn’t have long to wait. Our simple shack on the outskirts of Grand Lake had a tributary of the Colorado bubbling away just past the back porch. It was low–our neighbour, an affable chap called Michael who fished the stream every morning before sun-up for brown trout, said he had never seen the water levels drop so far.

The riverbed was treacherous. Muddy and filled with jutting slabs and humps of rock, I couldn’t get more than a foot away from the bank before a sense of imminent collapse came over me. I found a place where I could wedge my feet in place, and made my stand.

The water was cool now, the icy chill from the rushing streams of Adams Falls mellowed down to a temperature that you could bear for more than ten seconds at a time. Over on the other bank, a tiny shack stood on stilts amongst the reeds. I had no idea what it was for. Perhaps it was where Michael poked his rod out in his quest for fish. It would make, I pondered, one heck of a writing nook.

The Lord only knows how I’d get across to it, though. One more step on this slippery bed would likely see my feet fly out from under me. I picked my way back to the bank. Dinner was not going to make itself, and Lady Red was already eyeing up the hash jellies.

It was a long drive from Shadow Mountain Lake to Palisade. It didn’t have to be–if we were keen to get to our final destination then we could just sit on I-70 and put the hammer down. But what’s the point to that when there’s adventure to be found?

Far west of Vail, the steep walls of Glenwood Canyon rose up above us. Blocky, striated monoliths, capped and shod in green. Our old friend and traveling companion surged alongside us, slate-blue and foam-white. There was activity on the river now, kayakers and paddle-boarders testing their mettle against the fast-running stream.

At Grizzly Creek, there was an embarkation point, and we couldn’t resist. Hawkeye pulled the White Buffalo over, and Lady Red and I scurried across the inlet road and down to the bank.

I dug my toes into fine white sand, just cool enough to walk on comfortably. Then I waded out. After five hours in a car, even one with the comfort and leg-room of the Buffalo, letting cool Colorado meltwater lap over your ankles is something close to ecstasy. The walls of the canyon skyscrapered up on either side like temples, like God’s own business district.

Stretch and Hawkeye joined us, although they didn’t enter the waters. They were happy to hop around on the rocks by the bank, snapping off photos and videos. Just before we left, a trio of kayak-bros scudded up. I snapped a photo, and they immediately posed and stunted for the lens. Stretch was oblivious to their antics. There was a big bug on the rock ahead that consumed his entire attention.

Late afternoon, and we amble out from the ranch-house for a glass of wine in the sun. Palisade is the heart of the Colorado wine industry, a verdant and fertile plain surrounded by the towering cliffs of Mount Garfield and Grand Mesa. We had spent the early part of the afternoon in a couple of wineries, tasting and spending. Now it was time to enjoy the fruits of our ‘labour’.

Past the chicken-shack, where the chickadees cluck and burble, friendly and inquisitive. Then down the track, where a red outhouse stands over a reed-fringed pond. Even now, at five in the afternoon, it’s almost thirty degrees in the shade. We’re drinking more water than wine, and the sweat-band of my Rockmount Stetson is quickly saturated.

Eventually, I feel the need to unstick my arse from the plastic seat, and take a stroll down to the riverbank behind the outhouse. My old friend awaits, the stream running low and gentle over a rock-strewn bed.

I kick off my flip flops and walk into the water. It’s almost warm here, and I feel my feet start to expand, flattening out against the rock and sand. It’s completely quiet. There’s no traffic noise. I can’t hear the voices of my clan. I would take a photo, but the battery has dried on my camera and my phone is playing music up on the deck.

I don’t think I’ve ever been so utterly, peacefully happy.

3 thoughts on “Four Feet In The Colorado River”