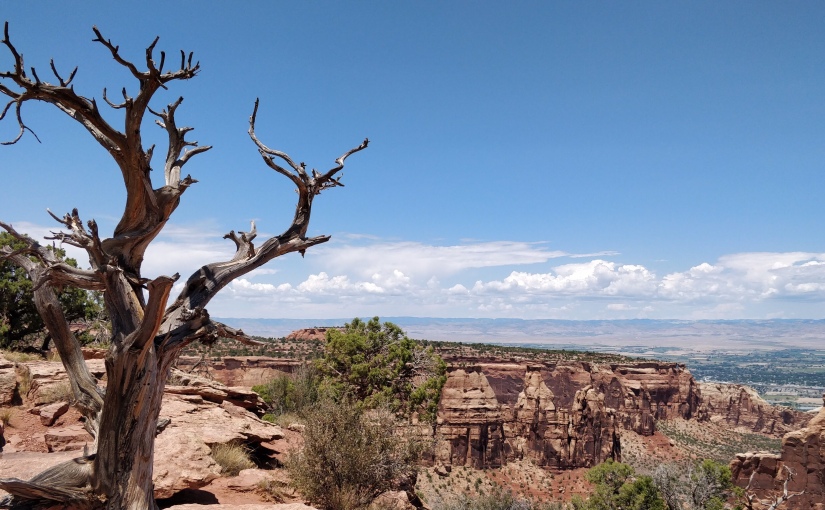 We were somewhere on Route 285, perhaps just outside Fairview, and I was deep into a fugue state. As I watched the browning landscape scud past the window to a soundtrack of 80’s goth-wave, the last three weeks swirled in my head, events sparking into focus for a moment, then popping away like a soap bubble.

We had come to Colorado to seek new experiences, and we had not needed to look hard to find them. My first time on a horse, in a hot-air balloon, down a sand-dune on a sledge, at a rodeo. My first taste of cannabis sweeties. The first time dunking my toes in the icy flow of the Colorado River.

Everything was heightened, over-saturated, heavily flavourful. The skies were bigger and brighter. The storms, when they came, were gigantic cruising cloud-monsters, thick with rain and violent bursts of lightning. The horizon seemed further away. The scenery was epic and, once we got above eleven thousand feet, breath-takingly cool.

Moments sprang to mind and smeared together as I drifted in my reverie. The first steps up to our apartment in Kalamath Avenue, Denver, to be confronted with the wall mural depicting the spirit animal that would define our time in America. The fireworks on the roof, unending cannonades of fire, both celebratory and hedonistic in the face of a state-wide fire ban. 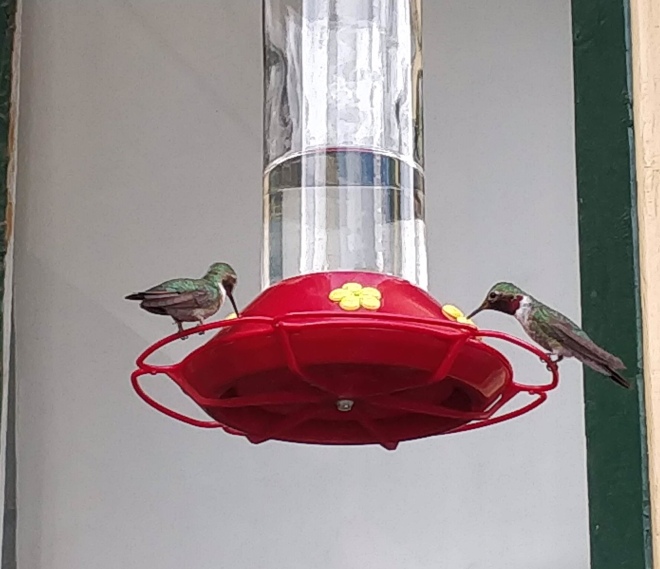 I dreamed of hummingbirds, like bright chips of coloured glass, quick as a half-seen reflection. On the ranch at Palisades, they joined me early one morning when I crept out to catch the sunrise setting Grand Mesa on fire. At Lake City, they swarmed the feeders on the shop fronts, zipping past our heads, communicating in bleeps and chirrups, fighting each other in seconds-long dog fights. A sweet moment in a town best known for its dark history as the setting for the story of Alferd Packer. The Colorado Cannibal. The bar and grill named after him is well worth a look, but check the menu carefully before ordering.

I dreamed in green. Recreational cannabis is legal in Colorado, although it’s not quite on the shelves at Walmart. The specialized shops certified to sell the herb in all its forms are part of a massive new market. It would be an unusual day not to pass a cannaboutique on your travels in the state. Some are happy to present the standard hippy vibe as a sales technique, tie-dye, patchouli and shonky hand-drawn graphics. Others go down the bespoke lifestyle choice, with clean shelving and a more discreet decor. Still others choose to look like chemists, especially those that sell a lot of CBD-laden creams, potions and unguents. In Colorado, the green cross does not have anything to do with crossing the road–an activity that itself is not wise after partaking in some of the options on display.

I discovered that cannabis edibles are not the gateway drug you’d expect. They offer a high dose of THC, which gets into the bloodstream far more effectively than smoke, and all at once. You go from flat to fukced in minutes. Not a good idea if you’re forced to cane the leftovers of the holiday stash at the airport on the way home. This one does not recommend. 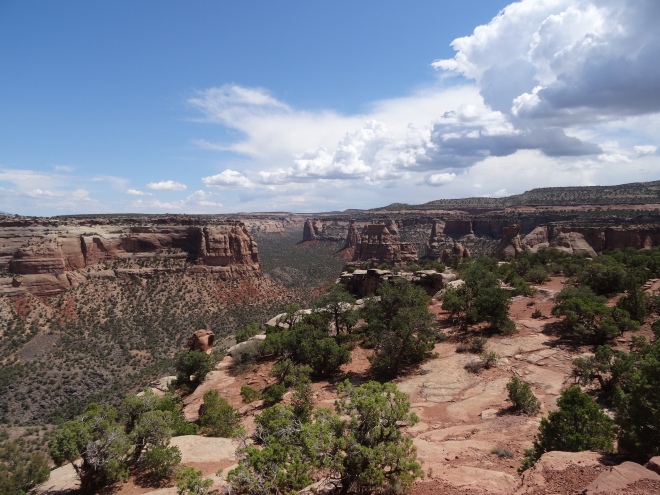 I dreamed in red. The towering formations of the National Monument, or Red Rocks, or the looming canyon walls through which the Buffalo took us. Great fortresses of sandstone shaped in infinite variety by the quiet insistence of water over stacked multiples of millennia. From sheets and sails to entwined lovers or clasped hands, at times it felt like there were new wonders around every curve of the road. I became almost miracle-blind, losing the ability to understand what I was seeing. I took so many pictures, as if they could serve as anything more than a pale reminder of the earth and the heat and the stillness of it all. 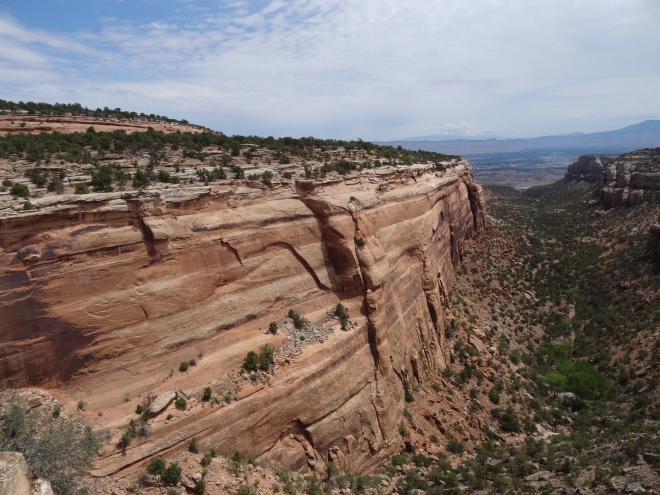 I dreamed of air and gravity. We didn’t get below five thousand feet above sea level for the entirety of our stay. There was only one real moment when the thinner air got to us–at over twelve thousand feet, at the highest point of the spectacular Trail Ridge Road. Altitude sickness affects dozens of visitors to the state every year, though, and we were witness to a tourist ready to be stretchered down the hill at a staging area near South Fork. At a little over ten thousand feet, we were hopping around like mountain monkeys. Best to acclimate slowly.

As to the nature of gravity–the broad-beamed loom of the canyons and rock formations, the sheer drops on either side of the roads that wound up into the mountains, the worryingly crumbly nature of some of those cliff walls–well, they put Isaac Newton’s epiphany with the apple right at the forefront of my mind. A trip in a hot air balloon on our last Monday in Pagosa made us feel as if we could defy that law. The basket was solid under our feet as we rose sedately over the cares of the world below.

We were in thrall to gravity when we visited Great Sand Dunes National Park, Arrakis in miniature. For some reason I thought it would be a good idea to hang onto a waxed tea-tray with a couple of handles inexpertly screwed on, and hurl myself off the steep sides of the fifty-foot high dune-slopes. I face planted more than once. The sand was scalding under my sandaled feet. I still found granules of mica in my ears three days later.

It was some of the best fun I’d ever had.

I dreamed of water. Of the Colorado River, which followed us up until the last week on our travels, cool and blue at the bottom of the grounds at Palisade and Great Lakes. Of the San Juan, muddy and effervescent as it became part of the hot geothermal network at Pagosa Springs. Standing on a rock at the foot of Piedra Falls, staring up at the clear water barreling down, cold and sharp and welcome in the mid-day heat that often seemed to turn to rain in the afternoons.

Ah yes, the rain. We must have brought it with us, for Colorado had suffered one of its driest seasons in nearly 40 years just before we arrived. At Pagosa, we did not have a day without a cloudburst. On our last day we had to leave the local rodeo early as a giant weather front closed jaws on the arena from two sides. The lightning was comic book intense. The deluge churned the dry earth on the roadsides to mud in an instant. At the opening ceremony of the rodeo, they had actively added a plea for rain into the prayers.

I dreamed of lunch and dinner. Of the chargrilled filet mignon at the Abbey Grill in Pagosa, a melting revelation on the plate. Of Riff Raff Brewing’s goat burger–pink in the middle, deeply flavoured and a perfect accompaniment to their robust beer selection. The porchetta with green chili at Bin 707 in Grand Junction, a hot porky hug of a dish. The char Sui burrito from Chui FU’s food truck, the moment when I found that Latin-Asian cuisine was no joke but one of those simple, brilliant extrapolations of flavour profile and food styles. The simple ears of corn I cooked for dinner one night, absurdly sweet and toothsome. We tried to stay away from the chains and went with word-of-mouth recommendations. Bin 707 was lauded by three different sources, including a random woman nursing an IPA while resting her huge friendly Akita at World’s End Brewery in Grand Lake.

I dreamed of beer. Colorado is in the middle of a craft beer revolution. There are over three hundred breweries in the state, all coming up with extensive, innovative menus. Renegade in Denver, a short walk from our apartment was a hipsters’ hangout, but the brews were sheer class. Palisade Brewing in erm, Palisade was based in an old industrial shed, but had a mellow local’s vibe. Their signature IPA, Dirty Hippie is complex and hop-heavy, and cuts through the heat of a Colorado summer afternoon like a water-knife. The choice was always maddening and worthwhile. Every bar we went in, however humble could offer a local beverage even if it was from one of the bigger players like Breckinridge or O’Dells. But if a town hosted a brewery, the bars would stock it. Local pride demanded no less.

Above all, I dreamed of Colorado. A place of astonishing natural beauty and the friendliest people you could ever hope to meet. A place where opulence and terrible poverty seem to live cheek by jowl, often on the same block. A fiercely patriotic place, where the blunt end of the politics that disturb the rest of the world seem barely to warrant a mention. Even at the Independence Day Eve celebrations at Denver’s Civic Park, the name of the President was not mentioned. The idea of America seemed somehow more important than the reality.

Colorado is a place that is proud of its history but unafraid of the future. Legal weed, craft beer and another big cash-crop–solar–are signals that the state is keen to attract new ways to stay funded. Perhaps part of that is the sheer diversity of the population. Colorado residents are, according to urban legend at least, born elsewhere. People live here because they want to. Which has brought its own problems, as wealthy out-of-staters push up property prices, and the locals find they are priced well and truly out of the market. The main concerns, in the same way that Coloradans prefer their groceries, were local, then state, then national. 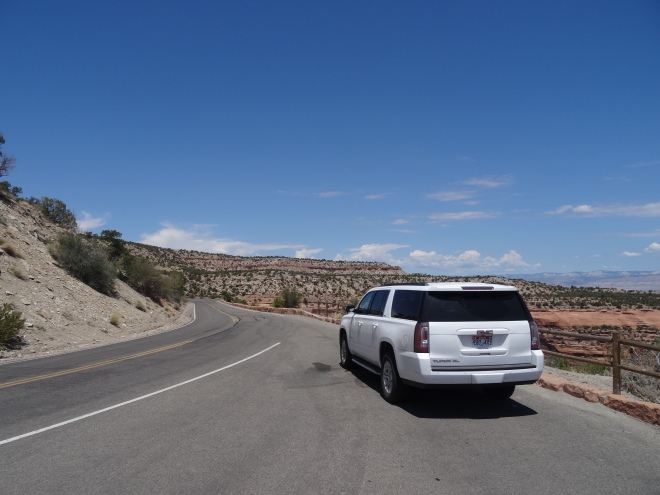 We left the White Buffalo in idle at the Thrifty drop off at Denver International. She had taken us around Colorado with grace and style. It was a wrench to leave our noble steed behind. But the time had come to load ourselves into a hurtling death-tube and get back to our lives. In England, it would be as warm, as dry as Colorado. The parks would be brown from lack of rain, and our garden would be a disaster zone. The sky would be too close, the air too thick.

But every ride has to end somewhere, and this was where we got off.

We needed extra luggage to bring back all the memories.

2 thoughts on “The Last Ride Of The White Buffalo”