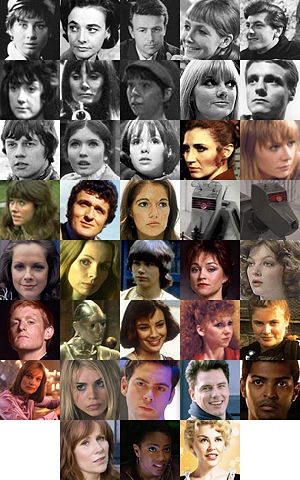 I loves me a bit of old school Doctor Who on a weekend morning, especially when Tom Baker lurches on screen and gives me that classic wide, wild-eyed grin. I watched a few stories back to back recently, cherry-picked from different points in the run, and something struck me (TLC, persuading me to do the hoovering, but that’s another story). In each, the companions served a specific and carefully maintained position. Sarah Jane, Harry, Leela, Adric, Tegan and Nyssa were on the show to ask questions and get themselves into trouble. Maybe hold up a hatch while the Doctor went at whatever was inside with the old sonic screwdriver. That was pretty much it.

Compare and contrast this with the companions in the new shiny version. Frequently the show will be about these characters. We will find out about their home life and their love life. We’ll meet their family. If you’re Martha Jones, you’ll get your own theme tune.

More importantly, they are on an equal footing with the Doctor. They will become part of the solution to the problem of the week. They can no longer be seen as bumblers or screamers. Sometimes, they will save the day after the Doctor has given up. Rose Tyler, I’m looking at you and your bonding with the Tardis here.

And then there’s the sex. The days when the Doctor would have entirely chaste relationships with the ever-changing panoply of pultrichude that swanned through the Tardis control room are long gone. He either falls for his companion, or the companion falls for him, hard. Martha’s unrequited pash for the Doctor became a defining part of her time on the show.

So let’s look at Amy Pond. A girl who grew up with an image of the man in the box that gradually twisted and mutated, developing a crush which turned into – something else. I have no idea exactly what it is Amy feels for the Doctor, but it sure as hell ain’t healthy. In the new series, Bow-Tie Doctor (I’m sorry, but the easiest way to refer to them is by costume. Long Scarf Doctor. Dandy Doctor. Cricketing Doctor. Which makes Christopher Eccleston Leather Doctor, and there’s an image that’ll be with me for days) has to struggle with a companion that has developed some very strange ideas about the nature of love. Dropping everything to run away the day before your wedding with a figure you built childhood shrines to is not normal behaviour.

The love triangle that’s emerged as Amy’s fiancee Rory has joined the crew brings Doctor Who closer to soap opera than it’s ever been. The most recent episode, Amy’s Choice, in which she’s forced to choose between which of “her boys” survives is genuinely new territory for telly Who, and it’s telling that no punches are pulled in the acting or writing. The villainous Dream Lord is played by Toby Jones, one of the finest actors of our generation. It’s written by Simon Nye, a new name to Who but an enormously respected name in the industry, and a man who can track the path of the dysfunctional heart with more sytle and aplomb than most. This is hardly the Doctor Who of memory and archive.

You can track this change in direction to Doctor Who’s most interesting period – that 15 year chunk when there was no televised Who at all. The franchise lived on in audio dramas and books, and explored new and strange directions, unencumbered by budgetary constraints or duff special effects. The lives of the supporting cast could be explored at whim. The main players in TV Who nowadays, Russell T, current show-runner Steven Moffat and writers like Paul Cornell all come out of this explosion in creativity, and their influence is clear. It was a time of tacitly endorsed fanfic, with all the strangeness and charm that comes out of that arena. These were new stories told by writers that had no agenda other than a love of the show, and a wish to see it done right. And of course, the sexual tension that’s now a part of the show is a big feature of the fanfic scene.

While I’m on the subject of sex and Who, I found the whole furore about Amy Pond being a “sexed-up companion” to be Daily Fail over-reaction. Not only was Moffat veeery careful with the definition of Amy’s day job – kissagram, not strippergram – but there was an almost deliberate blindness to the fact that feamle companions have always been eye candy in the show.  Consider Louise Jameson in her torn chamois leather. Peri Brown in her bikini. Wendy Padbury in the skin-tight sparkly catsuit. THAT picture of Katy Manning. Something for the dads, although that ignores the fact that boys of a certain age would also discover that funny feeling in their tummy while watching supposedly innoculous Saturday afternoon telly. I know I did.

The companions are key to the success of the new Doctor, not just because they are avatars for the watching audience. Their role has changed, and they are now interesting and involving characters with their own motivations and needs. You would never see Sarah Jane Smith throwing herself at the Doctor the way that Amy does, largely because she was never written to be anything more than the standard bit of fluff. I never really thought the episode where she and Rose bumped up against each other rang true, because I never really saw her having those kind of feelings for the Doctor. Or indeed any real feelings whatsoever. The focus of the show was simply not on her. She screamed, asked questions, and got loomed at by a tall bloke in spray-painted bubblewrap. That was it. Curiously, it’s only in her starring role in kid’s show The Sarah Jane Adventures that she comes across as a grown-up with feelings and responsibilities. Once again, the show-runners of Who always understood that you could sneak adult stuff into kids shows as long as you were ever so slightly subtle. Look at Moffat’s Press Gang – to my mind still one of the best TV shows out there. No-one could ever accuse that show of lazy writing or characterisation.

Doctor Who has expanded it’s remit. It’s a central part of the BBC schedules, which is exceedingly sweet to fans like me who could always see the charm in the wonky sets and air of slight silliness, and could enjoy the stories and writing. The fact that Who is now so very writer-driven, despite the Mill’s endearingly cheap special effects, is the reason it’s doing so well. It’s never been a cold show, and wears it’s faith in humanity boldly and without irony. By turning the focus a little away from the ancient alien in the blue box, and towards the boys and girls who share his life however briefly, that faith and warmth have only become more obvious.