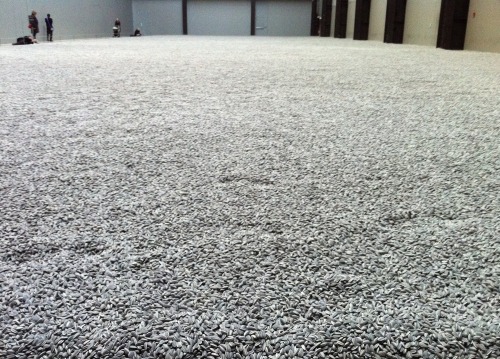 When a hospital appointment spits you out onto the South Bank at half nine on a Sunny winters morning, it seems foolish not to make the most of it. A coffee and pecan Danish fuelled some Nanoing, before I decided to amble east, and pop into Tate Modern.

I love it there. The place has a genuine sense of theatre and spectacle, especially if you make the effort to use the main ramp as you go in. Its an entry that I don’t think is bettered by any museum in London, and really needs to be soundtracked by John Williams’ Imperial March for full effect. The collection is thoughtfully curated, and I have my favourites that will always have at least five minutes of my time. That long, jazzy Jackson Pollack and anything by Mark Rothko will always have my attention.

But the main reason for the visit was Ai Wei Wei’s Sunflower Seeds. It’s an impressive piece, made of one hundred million individually cast and painted porcelain seeds. It cleverly touches on ideas of craft, disposability and material worth while also being accessible and beautiful.

The problem is that it’s not the piece that was originally envisaged. Sunflower Seeds was supposed to be an interactive artwork, where the public were allowed to walk in the seed-field. This would have been wonderful, adding an extra dimension to a work that already resonates on a ton of different levels. Sadly, after two days the seeds were roped off. The excuse made was that the porcelain gave off dust that was potentially carcinogenic over time.

I find this to be disingenuous. The film that accompanies the artwork shows guys in dust masks smoothing out the seeds as they landed in the turbine hall. It was obvious they gave off dust.

I have another idea. The seeds are clearly covetable and collectible items in their own right. I remember an earlier exhibition in the Turbine Hall which featured pulpy SF novels attached to dormitory-style beds in a neat nod to post apocalyptic fiction. A month into the run, and most of those books had gone. If the public can squirrel away books, then it would be a simple matter to tuck a couple of seeds up your sleeve. There would be no way to police it, short of a “no stooping” rule. Oh, and a banishment of deep-soled boots in which some of the seeds could get caught. And let’s not forget, Sunflower Seeds runs until May next year. I wonder how long it would take for the Turbine Hall to empty completely?

Gods know, I was tempted, and there were a couple that were within arms reach. The gift shop’s missing a trick by not selling a handful in little baggies. A fiver a pop for a bit of controversial art? They’d fly out of the door.