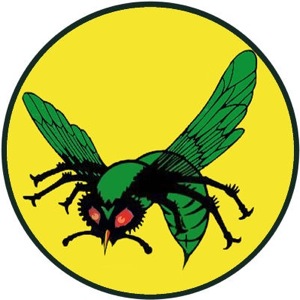 The fun of The Green Hornet lies in its familiarity. A millionaire tools around The Big City, fighting crime by night as a masked vigilante, in a souped-up super car, faithful sidekick at his … side. Holy ho-hum!

But let’s not forget, the radio serial in which Britt Reid and Kato first stung crime predates everyone’s favourite Caped Crusader by three years. The hidden lair and funky weapons that would become a staple of the crime-fighter’s armoury also made their first appearances here. As an urban version of the Lone Ranger, and a testing ground for all kinds of superhero tropes that included the mask’s uncomfortable relationship to the law, the Hornet was popular for decades.

The new film version has been a long time coming. Kevin Smith’s original scripts for a version that came close to shooting in 2006 have popped up as comics (Smith has form with heroes of the verdant hue, starting his comic career with a sterling run on Green Arrow. I’m sure there’s a Green Lantern script kicking around his hard drive somewhere). The Seth Rogan script that finally went before cameras helmed by French lo-fi wizard Michel Gondry was sat on by Sony for the best part of a year, and suffered innumerable reshoots. But it’s here now, and to my mind works as a fitting tribute to the gleeful silliness at the heart of all superhero fiction.

The film plays out as dumb, loud comedy, but it’s honest to its sources and to the shows and films they influenced in their stead. There’s a house-wrecking fight scene straight out of the Pink Panther movies (Blake Edwards loved the Kato character so much that the closest he came to disguising Inspector Clouseau’s sidekick’s origins was to change a consonant in his name). The irreverent tone and slapstick are nods to the William Dozier/Greenway Productions stable that sired both the Green Hornet and Batman shows in 1966. There’s a (possibly) clever skew here too though, as The Green Hornet was played straight, with little of the camp humour that made the Adam West show so popular. Nice to see the propulsive Billy May/Al Hirt theme tune popping up towards the end too.*

The neat twist to the Green Hornet story is that the true hero of the partnership is the sidekick. The Green Hornet show famously made a star out of Bruce Lee, and it’s a dynamic that, while hardly original these days, still has comedy and dramatic value. While I don’t think the new Kato, Taiwanese pop star Jay Chou, has the charisma of The Dragon, he has the moves. His masked counterpart Seth Rogen handles the many fight scenes with aplomb, floundering around after his black-clad buddy and getting in a couple of good hits … purely by accident, of course.

Whether you buy him as the hero of the piece depends on how you like him in general, because there’s no great artistic stretches in the acting. Rogan plays the same affable stoner he’s always played, giving Britt Reid the air of a low-rent Tony Stark (playboy crimefighters with daddy issues. The genre’s full of ’em). Christophe Waltz plays the Eurotrash bad guy Chudnovsky with flair, nailing the ridiculousness of the themed villain when he changes his name from one unpronouncable syllable salad to another. Cameron Diaz appears to be in it so that she can prance around in short-shorts at one point. Tom Wilkinson and Edward James Olmos add gravitas.

Michel Gondry finds himself in the same boat as any other cinematic stylist that takes on the Hollwood suitcase full of dollars. There’s little there to tell you that the director of Eternal Sunshine and The Science Of Sleep is behind the camera at all. The much-touted games he wanted to play with the 3D format aren’t really obvious. The action is frenetically comic-booky without going the extra yard or so that might have made it really interesting. I have the feeling that the director’s cut, should we ever see it, would be a very different film to the one I saw.

I wanted a 2D screening, but my local Vue couldn’t accommodate me. I had no option but to splash out for a 3D screening, and spent it popping the glasses on and off to see the differences. I found for the most part I didn’t really need them, and subsequently left the cinema without my usual stereoscopy-derived headache. The end titles looked nice in 3D though, and I was pleased to see that just about every Blambot font made an appearance in a crazed Lichtensteiny Benday-dot frenzy of OTT typography.

I enjoyed The Green Hornet quite a bit. It’s stupid, loud and nonsensical. But then so were the radio, movie serial and TV shows based on the character that came before. In that sense, the new version is carrying on the tradition admirably.

*Pop Quiz: an X&HTrophy to the first person to answer this in the comments: in which Quentin Tarantino film did the Green Hornet theme make an appearance?