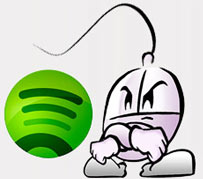 Spotify changed my life. I listen to more music now, from a wider range of artists than at any other point in my life. Everything from brand new releases to obscure back catalogue jazz and spookytronica, Norwegian death metal to Arvo Part. I even use it to play my iTunes library – the clean, simple interface is quicker to load and easier to use than Apple’s own bloated monster. I’m not alone. Over a million people across Europe use the service. It’s a serious alternative to piracy, and one that puts a pay-to-play model in place that is of direct (if, as some would have it, limited) benefit to the artists.

But clearly, Spotify need to expand. America is the place to be for this expansion, and in order to do that Spotify needs to play nice with the big American labels. This is always a bad move. The big American labels think nice is a type of biscuit. Compromises have had to be made, and Spotify have ended up honking off a significant chunk of their core audience – the listeners that use Spotify Free, the ad-supported service.

Here are the changes, from the Spotify site:

As of May 1st, any user who signed up to the free service on or before November 1st 2010 will be able to play each track for free up to a total of 5 times. Users who signed up after the beginning of November will see these changes applied 6 months after the time they set up their Spotify account. Additionally, total listening time for free users will be limited to 10 hours per month after the first 6 months. That’s equivalent to around 200 tracks or 20 albums.

This redeploys Spotify Free as a music discovery service, rather than the on-demand radio for which a lot of customers use it. If you really like an album or track you discovered through Spotify, playing it to death on Free is no longer an option. The intention, as most people have sussed, is to move customers onto Spotify’s paid services – Unlimited, which strips out the ads and allows you to play everything for as long as your little heart desires, and Premium, which adds smartphone functionality. I am an Unlimited customer, and do not begrudge the fiver a month I spend on it. It’s a hell of a lot less than I used to spend on CDs. However, while I can handwave away the changes as no big deal, get a grip, pay your fiver and lose the ads, it’s clear a lot of users and now former users of Spotify are deeply upset and betrayed. And that could lead to other problems, which perhaps needed to be dialled into the discussions at Spotify before the changes were rolled out.

Mac Chapman runs Spotstock, an innovative, collaborative online music festival. Users submit playlists via Twitter, and they are compiled on the central Spotstock site. It’s a great way to share your passions. I was happy to be a part of it last year, and will be contributing this go-round. He’s thoughtful on what might happen next:

Will Spotify’s free market move onto paid plans or will they move back to piracy? I think that the amount of time I’d spend looking for music online illegally is worth more than 5 quid, and I’d like to think that people agree, but I’m not sure that’s true.

He’s also clear on the ethical side of using Spotify:

As a purchaser of music, I care about getting money to the artists, and I want Spotify to be something that benefits my favourite artists as much, if not more, than buying CDs and merchandise. Right now, Spotify doesn’t pay out much, but if moving more people onto unlimited and premium makes them more money, I hope that it can pass more on to the artists and it could become a more viable revenue stream.

This is a good point, and one that other commentators have picked up on. Steve Lawson is a jobbing musician, and is sensible and pragmatic on how much (or little) Spotify pays artists for listens to their work. And more to the point, whether that rate should change dependent on whether that listen comes through a paid or free service:

I’d rather make my music free to download, no strings, and be rewarded in gratitude than have some weird filtered, taxation-based payment mechanism for it where people are left thinking music has neither cost nor value because there’s no tiered pricing, no opportunity to ‘pay what you like’, no thought about the value over and above the experience that access is via a portal and detached from the artist…

Listening to ads is a form of payment. We all know that. If the ads don’t cover it, then it’s a lie to keep that system going by subsidising those listens from people who are actually paying – people who are quite explicitly paying a subscription rate that puts a distinct value on their listening time. To not divide those up is to say that the value of both listens is the same. It isn’t.

The assumption of how people use the service is also less clearcut then we’d presume. Dave Riley, Free man and Spotstock contributor, takes us through his Tao of Spotify:

I’m probably not a typical user – I don’t have any need for the apps as my mobile is stuck in the 20th and will stay there as far as I’m concerned – and I tend only to use Spotify at work rather than at home/out and about. In any case, I don’t use it to discover new music, I use it to play the music I like, occasionally looking up something new and trying out an album, but mostly it’s to get those individual tracks that I don’t have on albums I own – take a bow David Bowie & Queen with ‘Under Pressure’ – the first track I added. So bearing all this in mind I tend to listen to a lot of the same music – one of my playlists (“epics” – for tracks over 5 minutes only and only half of which I own!) is only 6 tracks long – so under the new rules after five half-hour sessions – *blip*! And basically what I’ll do now is let it all cycle through to destruction, as it were, at work – I’ll let all my playlists run until they can run no longer!

I use Spotify in almost the exact opposite way to Dave: Spotify has become the hub of my home music solution. Using Airfoil to stream music to powered speakers in the front room, and a good old fashioned jack into the Aux input of the amp hooked into my turntable, I’m pretty much covered. But the important thing: both our solutions work, and both run counter to the image that Spotify themselves have in place.

There’s a concern that Free users will simply abandon Spotify and move back to torrents and Rapidshare to get the music they want. This is always a risk, and there’s nothing stopping people using the service to preview material and using P2P or download sites to get what they want. But, at the same time, it’s also conceivable that they could go to any number of online retailers or god forbid a record shop to snag the goodies. There simply aren’t available figures to show how people use Spotify Free, and more importantly, what other services they have. It’s disingenuous to say that disgruntled Spotify users are just going to start frequenting torrent sites again. There are plenty of other music streaming services out there. The thing is, Spotify is the best at what it does.

This is, I think where the huge cloud of static and rage has come from – a cloud big enough to be front page news on provincial free paper Metro a couple of slow news Fridays ago. Spotify is a big deal precisely because of the depth of catalogue and ease of use, and changes to that usability have affected a lot of people. The argument of coercion that users are putting up on forums, that Spotify is forcing them to start paying money for a service that was free can’t be countered by the argument “well, go somewhere else then,” because there’s nowhere else as good. Collaborative playlists and events like Spotstock simply couldn’t exist on services like Grooveshark or Soundcloud. Spotify, for the moment, and for all its faults, is as good as it gets. No, the payment model isn’t great, but as Steve Lawson points out, musicians should be using Spotify as one part of a multi-platform strategy. If nothing else, it gets your music heard by an ever-growing audience who might even be prepared to hit the Buy button.

This is going to rumble on for a while. People are, with some justification, hurt by a service they trusted and depended on suddenly putting on the brakes. Personally, I believe that a fiver a month for an Unlimited account is extremely good value for money. It should be noted that Spotify are planning a free month-long trial of Unlimited in May, that Free users planning on leaving might consider. Certainly, it’ll give you the chance to get a kicking playlist out for Spotstock!

Spotstock will be running from the 2nd-6th of May. For more details, check the site, and it’ll be worth following Mac on Twitter as well – he’s @puresock. Thanks also to Dave Riley for additional reportage.