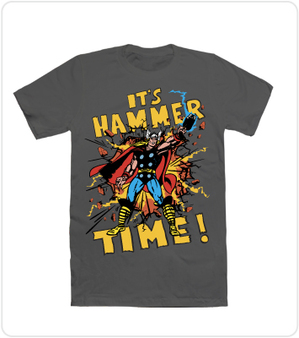 Superheroes are mythical beings. They stand above and apart, capable of acts that we humble mortals can only accomplish in our dreams. In many cases they are not human at all, choosing to protect us out of some sense of loyalty or in gratitude for an act of kindness. They are otherwise aloof, and they have their own agendas and motivations. We should be grateful that they are not gods, for as any student of mythology knows, gods are cruel, capricious and selfish beings.

In 1962, Stan Lee, Jack Kirby and scripter Larry Lieber realised that they could take existing mythological beings, and tweak them for the comics market. Greek and Roman tales were too familiar. But the legends of Asgard had a fresh feel. Hence, with a crack of lightning, Thor, the God of Thunder appeared in the pages of Journey Into Mystery. He would battle monsters, man-made and otherwise, and struggle against the machinations of his brother and arch-enemy, the trickster Loki. Like many Lee/Kirby creations, Thor had an alter-ego, the crippled doctor Donald Blake, whose disguise would vanish should he strike his cane, the cloaked hammer Mjolnir, on the ground.

It’s hard to write about Thor without slipping into the vernacular. Lee and Leiber have no truck with understatement, and their prose can never be too purple. Thor and his Asgardian family speak in a strangled cod-Shakespearean English which makes no sense when you consider that they’re supposed to be Norse gods, but somehow fits with the goofy charm of the series. It’s widescreen, deep-focus, scenery-chewing fun of the highest order.

Kenneth Branagh, tasked with bringing nigh-on fifty years of myth, mystery and magnificence to the screen has taken the right approach. He’s kept things lighthearted, while giving the simple script some proper emotional heft and weight. He was always an interesting choice of director. He gets blockbuster action, while not allowing it to overwhelm the story.

The film looks great, taking the best parts of Kirby’s technomythological (yes, that’s a word now) designs and giving them a subtle modern sheen. The scale and spectacle of the piece give you, true believer, one big fat double page spread after another in full eye-popping Kirbyvistascope. Upgrading Asgard into a society that has moved beyond the simple definitions of magic and science is a neat move, and making sure that the Clarke Paradox gets an airing shows that he knows the core audience. The film is full of little nods and winks to the fanboi community, but they’re not in your face.

Our Ken is very much an actor’s director, though, and it shows. All the cast get a chance to shine, and help move the story away from Wagnerian bombast and towards a tale that has a little more humanity. I’d save special kudos for Jaimie Alexander, who embues warrior maiden Sif with the right blend of toughness and vulnerability. But it’s Tom Hiddleston as Loki that makes the film. Whenever he’s on screen, you can see him plotting, planning, always ten steps ahead of everyone else. In interviews, he’s admitted that this was how Branagh had directed him; another sign of how attuned the director is to the mythology.

If I have one grumble, it’s that the script gives Loki a backstory, a reason for his schemes. That’s unnecessary. Gods don’t need motives. Loki is a trickster because it’s in his nature. The scorpion will always sting, even if it means his own doom. It’s how the myth works.

Branagh and his cast and crew have proven themselves worthy bearers of the torch that Lee, Lieber and Kirby lit forty-nine years ago. At last, we’re starting to see superhero movies that can stand up to the weight of all that history, and all those stories, and present them with grace, wit and style. It’s a thundering good film. Excelsior!