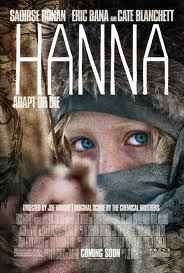 A girl and her father live in a cottage in the middle of a forest. It’s a simple existence. They hunt, and read together, and every so often the father will leap out of the undergrowth and try to beat the girl up. He warns her that she needs to be ready for attack even when asleep, and she assures him that she will be in several languages.

The girl decides she is ready to leave the forest. So the father digs up a military transponder. Once she flicks the switch on it, the world and all it’s dangers will come to her.

She flicks the switch, and the wolves come running.

Joe Wright, director of so-so adaptations of literary classics, has decided to radically change direction with Hanna, his first film based on an original story. It’s an up-tempo thriller with an SF twist, backed with a killer soundtrack from the Chemical Brothers (the best I’ve heard since Daft Punk’s Tron: Legacy monster). It boasts a couple of great central performances from Saiorse Ronan and Cate Blanchett and a nice story idea.

But it doesn’t hold together. The script is full of plot holes and dangling threads. Tom Hollander’s monstrous assassin is a bundle of cliches tied up in an ill-fitting Tacchini tracksuit. The nice bunch of middle-class hippies that offer Hanna a different definition of “family” to any she has hitherto known simply vanish at the end of act two, never to be seen again.

While watching, I kept coming back to the transponder, the literal flick of the switch that starts the movie going. Why would Hanna’s father insist that if she was going into the world, it would be as a warrior at bay? I waited for the reason, the revelation of the long game that he had been playing. The revenge play, the public exposure of the terrible plot.

It never came. There was no point to bringing Marisa, evil step-mother and big bad wolf in one power-suited package, back into the picture. It seemed to be an unnecessary sacrifice of everything that father and daughter had shared in the forest. It started to seem uncomfortably like a fit of pique.

As a movie, Hanna is dressed up nice and plays pretty. There are some sterling action sequences, some fun camerawork, and it’s not, at least, part of a franchise. But the lazy comparisons with the work of Luc Besson do both parties a disservice. Hanna is not Nikita meets Leon. It doesn’t have Besson’s bite and fire. Worse, it has a hamfisted way with visual metaphor (count the eyes on posters as Eric arrives in Germany. We get it. He’s being watched) and a final line and shot that you can see coming a mile off.

Summary: Not quite a wasted opportunity, but nowhere near as clever or groundbreaking as it believes itself to be. What a shame.