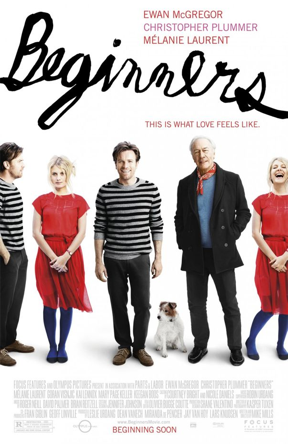 A couple of weeks ago, The Corpus Crew decided to get our script looked at by a professional script consultancy, just to poke under the bonnet, kick the tyres and let us know if there was anything that needed tweaking.

It was an un-nerving and humbling experience, to put it mildly. Everything had problems. The film was structurally weak, had no real flow, the dialogue was mannered and out of place. We left the meeting feeling as if we’d been repeatedly kicked in the nuts. We got what we wished for, I suppose.

I wonder, then, what the consultancy guys would have made of Beginners, a film that seems to have no real structure, uneven flow and deeply unrealistic dialogue. I guess I’d be no good at the whole script breakdown lark, because cards on the table right here and now: it’s instantly one of my top five films of the year.

Beginners is a film about transformation. It’s about how radical change can bring on radical change in all kinds of other directions. It’s the story of Oliver, a David Shrigley-style artist, still numb with grief after the death of his father, Hal some months earlier. He meets a French actress, Anna, a Manic Pixie Girl with troubles of her own. As she enters his life, we find out that Hal had gone through changes himself, coming out at the age of seventy-five.

The film pings backwards and forwards in time, letting us see the changes in Hal and Oliver evolve, and how they come to life in the midst of tragedy and newly discovered love. Batting around the timeline makes perfect sense, and this lack of linearity never feels forced or cripples the storyline.

The acting is uniformly excellent. Ewen McGregor still can’t do an American accent, but that really doesn’t matter here. He’s open and vulnerable without being a damp rag. Christopher Plummer is an old-school delight, raging against the dying of the light. Melanie Laurent is a revelation as Anna, vibrant and unpredictable but never kooky. She was a fearless standout in Inglourious Basterds, and she is equally brave and luminous here.

Beginners is also the first film since Up to get away with a talking dog, and not have it come across as cutesy or irritating. In fact Arthur is a pivotal part of the cast, and his (oh, alright, subtitled) dialogue is on the button. But Cosmo, who plays the lonesome pup, gives an informed and naturalistic performance. Yes, really. Not bad for a Jack Russel from a rescue home.

Beginners is an autobiographical film, based strongly on writer/director Mike Mill’s relationship with his father. It’s filled with little flashes of memory and recollection. It feels like a scrapbook, or a compiled reel of old Super 8. Bopping between the 50s and the present day opens up the storytelling, allowing the performance and script room to breathe.

You could argue that the film is slow in places, perhaps a little mannered, but if you’re in the mood for an antidote to all the summer blockbusters, you honestly couldn’t do better than this lovely, vibrant, life-loving film. It certainly got me thinking about the biology of film-making, the bones and spine that have to be in place before you can give a script heart and guts. Beginners may seem scattered and haphazard on the surface, but every shot has a place and reason. It’s assured, grown-up film-making that shrugs off tired ideas about structure in favour of a pleasingly freeform approach. It hit me right in the sweet spots.