After the success of El Topo, Jodorowsky was given a million dollars by John Lennon and Beatles manager Allen Klein to make a new film. That film would lead to a controversy that would see both movies vanish from screens for over thirty years. That controversy would give the film an extraordinary, almost mythical status. 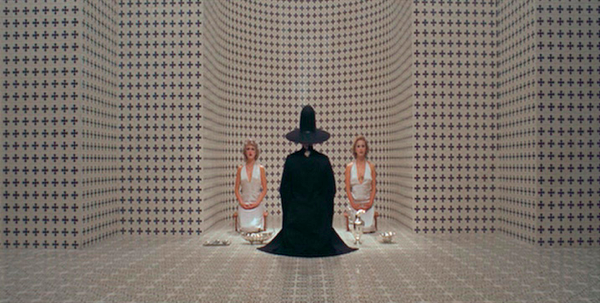 In The Holy Mountain, many of Jodorowsky’s later obsessions are brought into full light. The Tarot, alchemy, the idea of transformation through trial and ritual, and the cruel, arbitrary and foolish nature of modern society and religion all intertwine to create a film that eschews plot and character. Instead, Jodorowsky’s roots in surrealist cinema are laid bare, and we are presented with a multi-part story that feels more like a lysergic experience than a trip to the flicks.

In the film, a Thief (like I said, no characters to speak of, just archetypes spouting aphorisms and koans) encounters The Alchemist, a guru with supreme knowledge and power. The Alchemist has the power to create gold from the basest of materials, but seeks the greatest power of all–immortality. Together, they recruit a band of evil and powerful men and women, and lead them on a quest to the Holy Mountain, where they can wrest the secret from the Nine Immortals that hold it.

Given free rein with the Beatle’s money, Jodorowsky threw it all up on screen. The Holy Mountain looks extraordinary, from the opening where the Alchemist prepares two willing and nubile noviciates for enlightenment, to the scenes in the corrupt and terrible city that is home to his red dirt tower. Plot is abandoned in favour of a series of vignettes. The characters are representations. The evil businessmen and women introduce themselves as planets, astrological symbols. The Thief has parallels with Christ.

The sense of playfulness in the world of The Holy Mountain becomes clearer the more you let the film seep into you. Religious iconography and ritual are mashed up and mixed together in a joyous muddle. Skinned dogs are paraded on crosses like pietas. The Thief is used as a template for new icon, and awakes in a warehouse filled with papier-mache copies of himself in the traditional pose. In the Alchemist’s tower Buddhist, Christian and cabalistic signs are everywhere, and alchemical symbols clash with Rosicrucian mythology in a giddy whirl of secret histories and forbidden knowledge. If you read the Fortean Times regularly, you’ll get a real kick out of this film.

It’s not all happy trippiness, of course. The journey to the Holy Mountain ends, not in enlightenment, but in a declaration that everything we have seen has been a fairy tale. Jodorowsky, playing the Alchemist, reverts to the role of director onscreen. He gives an explicit instruction to camera to zoom back, and declares that the only magic at work is the return to reality. This seems a bit off, and a little dismissive of an audience who are well aware that they’re watching light on a screen. There’s a sense of Jodorowsky starting to believe his own press, and thinking that he can actually alter our consciousness with cinema. Something of a disappointment, on a par with “and then they woke up and it was all a dream”.

The dream would soon collapse for Jodorowsky. His refusal to direct a version of “The Story Of O” for Klein (unsurprising as he had discovered feminism during the drug-fuelled exploration of his inner self that he undertook while filming) led to the producer pulling both The Holy Mountain and El Topo from distribution. Famously stubborn, Klein would not relent until a DVD release in 2007. Until then, the occasional secret festival screening was the only way you could see either film. Rarity led naturally to notoriety, and the myth of these two mystical, powerful films could only grow. 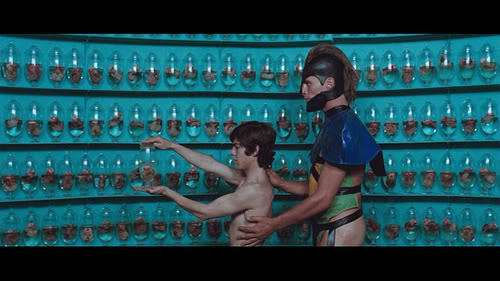 Jodorowsky’s star has been on the rise again in the 21st century, as we’re finally able to see the works for which he is most famous. As well-known for his comics as his films, Jodorowsky shows us a universe where symbols and ritual have real meaning and lasting effects. It’s a place where the Tarot is a map, and the journey we take through life is transformational in ways beyond age and experience. His films and books are not for everybody. That’s not snobbery. It’s a simple fact. He can come across as preachy, self-satisfied in the well of knowledge that he has not only drunk from, but helped to dig. He never flinches from violent or sexual imagery. In fact, he revels in them. He has never lost his ability to shock or provoke. That’s not why most people go to the pictures or read comics.

But if you’re prepared to open up to Alejandro Jodorowsky’s blend of absurd surrealism, stunning and outlandish visual style and heartfelt desire to expand your horizons using all the many tricks at his disposal, then there’s a lot to enjoy. I have immersed myself in his world this week, and found myself welcome.

Maybe there’s a place for you on the Holy Mountain too. 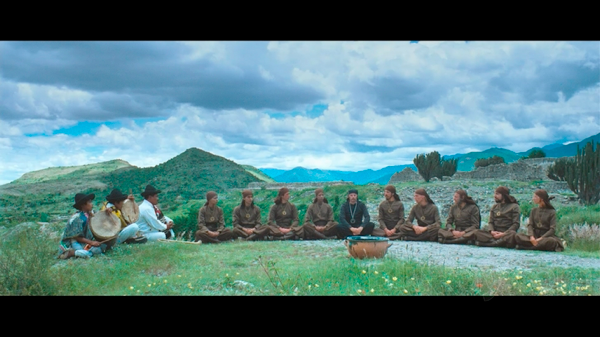