This weekend was something of a change from the norm for me. Instead of chiling out and maybe watching a movie, I was running around helping to make one. It was one of the most exhausting and rewarding couple of days I’ve spent in a looong time.

[Please note, there is a SPOILER ALERT in operation after the jump.] 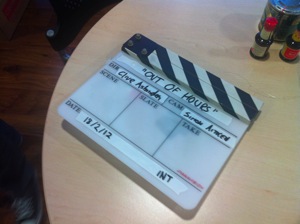 It’s all Leading Man Clive’s fault. He wants to get some interest in a feature script he and his mate Stu have put together. To do that, they came up with a crazy idea that might just work–do a short in the same genre showing their film-making chops, show it at Cannes and get a buzz going. With that in mind, they came up with a script that I can best describe as Die Hard With A Secretary. They called it Out Of Hours. And they had a perfect location: an office block on Tottenham Court Road that just happened to be Stu’s workplace. The call went out for crew, and I answered. My skills are largely in post-production, but I hadn’t been behind a dramatic camera set-up since my 2009 Straight8 Time Out. I wanted to help in whatever capacity I could. Clive, for some reason, likes my stills photography, so he put me on board as set shutterbug and second assistant director.

If that sounds like a glamourous job, then you’ve clearly never been on a film set. The First AD does all the grunt work for the director, keeping things moving and on schedule. It’s all the hard work of the director gig with none of the kudos. It’s a tough job, and you need to be part sergeant-major, part psychologist, and part cheerleader.

The second AD, then, is the first AD’s bitch. Fetch and carry, spare pair of hands, the occasional hot drink for the cast or a cameraman who’s on the edge and needs caffeine, on point at all times. Oh, and clapper board duty, which means keeping track of shots, slates and takes. On a big shoot, this would be the job of a dedicated clapper-loader. This was not a big shoot.

Saturday morning came up dank and dreary, which can only be a good sign when you’re doing an indoor shoot. The production base for the next couple of days was a bright room on the sixth floor of the building, with a wall of windows and a great view of the BT Tower. I arrived on time because I am a professional, to find Clive and Stu already there starting to set up. The rest of the crew appeared over the next ten minutes.

Let’s meet the band. Alex on sound, focussed and smiling. Andy on B Camera, intense but affable. On A Cam, the almost legendary Simon Aitken, whose work I’ve spotlighted in the past. Adele, make-up assistant, was shy but soaking in the atmosphere of her first film shoot, joined later by lead make-up artist Virginia, dryly humourous and consistently inventive. Stu cruised around, cracking jokes and offering breakfast pastries. He was producer on this gig. He has a producer’s moustache (a fine, staunch, bristling number), and the easy problem-solving grace that can only come from time served managing a rock band. 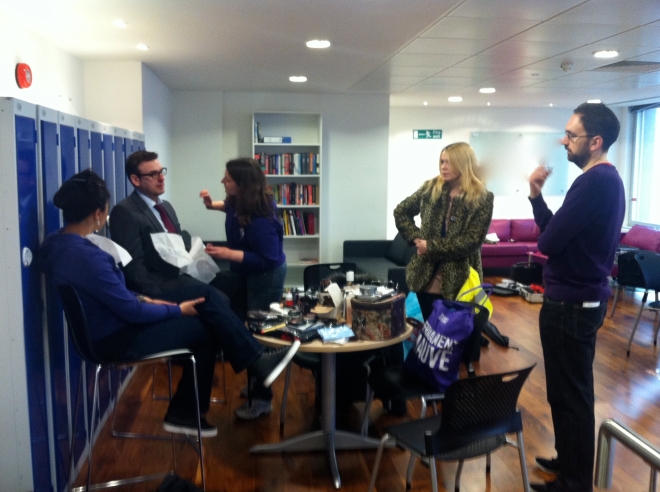 As I tried to figure out exactly what I was supposed to be doing, the cast arrived. Ben and Henry, playing two hired assassins, softly spoken and charming up to the point when the camera rolled, when they both changed into scary, stone-cold killers. Maria, the hero of the piece, sweet and funny. And Keith, who I’d met through an evening of short films he’d hosted late last year. He would be pulling double duty over the weekend as assassin’s victim on the Saturday and first AD on the Sunday. He was outgoing, deeply knowledgeable and a smooth sweet-talker–all the elements you need for a good AD. I was doomed to fail before I even started.

We spent Saturday morning in lifts and stairwells, shooting the death of a character. The lifts had a mind of their own, galloping up to the seventh floor at the slightest provocation. At one point they delivered a bewildered Virginia into the middle of a take, and I was just waiting for the moment when an office worker would be confronted with a lift containing a camera, boom-toting sound man and two besuited thugs with guns. We were sick of the bored female robot running the lifts by the end of the morning. At one point we were convinced she was playing with us. Virginia and Adele helped Keith to look authentically smacked around, but the worst was yet to come for him.

The stairwell was one of those open numbers with the vertigo-inducing drop through the middle. Simon and Andy pointed cameras up and down this vertical drop, and we shot chase scenes between Ben and Henry the hitmen and Maria while Keith had an impressively gruesome prosthetic applied. We were juggling lenses and hand-held rigs, and I was running up and down stairs like a crazy thing.

I have sneered in the past at clappers that are off-frame or out-of focus. They’re an editor’s nightmare – no snap of the board means issues with sound sync, and if you can’t read it you don’t know which take you’re on. But it’s hard work. When two cameras are set up four flights of stairs apart, I had to pelt up and down and still make sure they could see me when I clapped, before getting out of the damn way so Clive could should action. I don’t think I did the best job. Clive, sorry in advance for any SNAFUs, mate.

Lunch, finally, nearly an hour behind the posted schedule. Maria and Keith ran off to a table reading. Sadly, he decided not to go on the Tube with a bullet-wound to the eye still in place. Keith had been full of advice, but now I was on my own and had to try to pull back some time. My heart sank a little. We had some tricky stuff to do in a new location. At least, I consoled my aching thighs, it was all on one level. 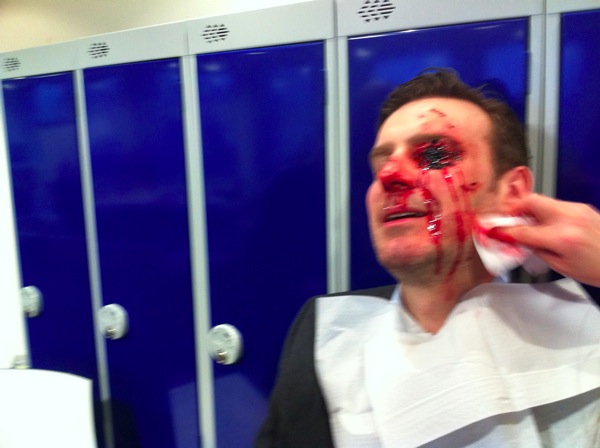 A snatched lunch in a nearby Micky D’s later, and we were in the basement parking garage. I had an answer to the one question that had puzzled me all day. There was no lighting rig. How were we going to get the shots we needed in an underground car-park? The answer made my head swim with potential.

Simon and Andy were using a matched pair of digital stills cameras, Panasonic GH2s. With big CMOS sensors and fast lenses they’d picked up for a song on eBay, the simple fact was that they didn’t need them. With an ISO of 3200, they had everything they needed. And that wasn’t even pushing the kit that hard. “Watch this,” Andy told me, and opened up the camera aperture. The basement shot he’d lined up lit up as if someone had fired up a massive bank of Ks. All the detail was there that I’d need when it came to grading the film. I was genuinely excited and gobsmacked. All of a sudden, the rules had changed.

The evening moved on. Ben and Henry brought the threat, and were totally believable and menacing. Maria rejoined us for some shots in a dark corner. Again, the cameras effortlessly pulled out the detail we needed from the shadows. Well, OK, we needed a reflector at one point. I messed up by being helpful, tidying up the contents of a spilled handbag that we needed to be still in place for the next shot. Ten minutes frowning at playback and figuring out whether the nailfile was to the left or right of the hand lotion put us back in a good place, but I still felt like a knob.

At half nine in the evening, Clive called a wrap for the day. I consoled myself with the fact that at least we hadn’t gone any further off schedule, and that Keith would be back on point tomorrow. However, he was on another shoot that evening, an all-nighter. He would join us tomorrow morning for a long day on no sleep. I was knackered after 13. God knows what state he’d be in. 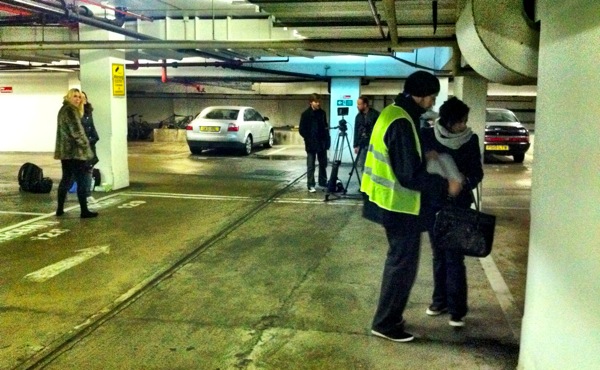 We packed up and moved off. Simon, Andy and I were staying with Stu at his place in Leyton, in the shadow of Orient’s football ground. He graciously fed us spag bol and red wine, and the conversation drifted through the world of film in a weary but cheery way. Would have made a good podcast. I must get hold of a cheap audio recorder.

Finally, we hit crash point at one in the morning. Maybe 5 hours sleep before we’d have to do it all again. More running, more blood, more action. As I curled up on Stu’s sofa, under a print of a Kozik labbit that I kept telling myself was a good omen, I had one mantra. Keep telling yourself, it’s only a movie.

Coming up: Killing Xav, How to AD on no sleep, and why you shouldn’t get fake blood on a white-painted wall.

4 thoughts on “Available Light: My Weekend as an AD – Day One”