I knew it was going to be an interesting evening as soon as I walked through the door of Moor’s Bar. I was greeted with a loud halloo, a high five and a hug by a woman to whose face I could not immediately put a name. Then she started dancing at me and the truth dropped with a heavy clang. I had no idea who this woman was, and she was drunk as a skunk.

It took a while to extricate myself, much to the amusement of Leading Man Clive and Simon Aitken, who watched my predicament from a safe distance (THANKS, guys), clearly amused as I tried to stay polite and unmolested. My virtue remained unsullied (just) but by that point I was REALLY ready for a beer.

I was in Crouch End for the monthly Feast On Film night that Moor’s Bar’s affable owner Andy hosts with James Rumsey to show my support. It was something of an Out Of Hours reunion, as Xav Rodriguez, Keith Eyles and Simon all had films on the bill. It was also a chance to drop off a hard drive to Clive. A hard drive that had the graded pics from Out Of Hours on it. Two days earlier, Clive and I had sat together in a Nucoda suite and given his newest, greatest short a dose of pixie dust. Gotta say, even though I’d said it didn’t need much work, it benefitted from the extra effort I put in. I’m proud to say that it looks really good, and I can’t wait for the imminent cast and crew screening.

But that’s in the future. There were six short films on the bill on this rainy Wednesday night in North London, and plenty of film-makers to meet.

First up, a piece from the one director that couldn’t make it. Hector Corp is a three-year in the making corporate spoof from VFX wizard Gary H. Lee, that took the idea of mass redundancy and added plastic penguins to the mix. There was a Gremlins vibe and a skewed dark humour on show that had the bar roaring with approval. A great start, and a shame Gary couldn’t have been there to take his praise.

Prey was next up. A moody short by Xav Rodriguez, who I had last seen as a sleazy security guard on the Out Of Hours shoot. A twisty tale of the relationship between hunter and hunted, it benefitted enormously from the rain-slashed night exteriors – a fact that Xav admitted he’d neither scripted or planned for. It just so happened that on the two weekends he was shooting, the heavens opened at exactly the same time. Sometimes, you just have to embrace the gifts you’re given – even if they don’t seem like gifts at the time.

Open Window, directed by Matt Prendergast from a script by Feast regular Mark Brown was a noir short-short with a great little twist. I’m not usually a fan of voiceover, but here it was kind of the point. Shot in under an hour in a pub toilet, Open Window was very much a case of just grabbing a camera and making something. The two Marks have moved on a great deal since that early short, but as a starting point Open Window shows the sharp humour and solid writing that has become a trademark of the BraineHownd film experience.

Another early example of a film-maker’s art was up next. Keith Eyles’ Crossed Lines took a dark view of what can happen when you accidentally text the wrong number. It had a Hitchcockian air, with some nicely tense scenes and a bleak view of romance. It’s Keith’s longest film, and the one where he tried out a ton of different techniques. But it all hangs together visually, and I thought it was a great little piece.

Without Subtitles was fifth on the bill, and I don’t think I need to tell you any more about that. Simon tells me he has plans for ninja screenings at Cannes. If you’re going, keep your eyes open, and if you see Simon and Ben, ask nicely and you might just get your own private show! 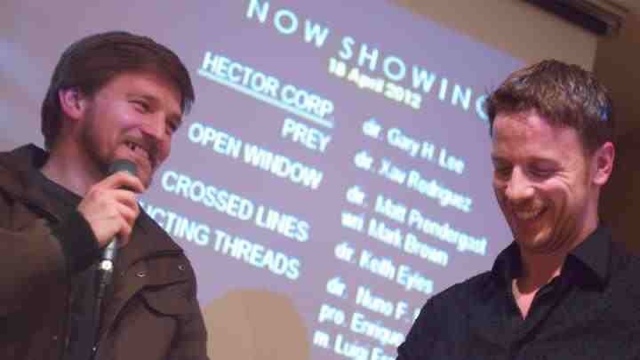 It was the first time I’d seen it on a big screen. While I will always have issues with bar projection, I thought it looked pretty good. It’s the colourist in me. I never finish grading a film. I just have to stop.

The final film of the night was Conducting Threads, a lovely surrealist romance from Spanish director Nuno Montero. It’s one of those films that’s open to all sorts of interpretations, none of which are wrong. Composer Luigi Frassetto was in attendance, and gave an interesting perspective on the way writing music for film is a different creative challenge to just about any other composing job. A surprise appearance from actor Martin Head gave us yet another view of Nuno’s directing approach – which seemed to be allowing the cast and crew to make up their own minds about the film’s meaning! 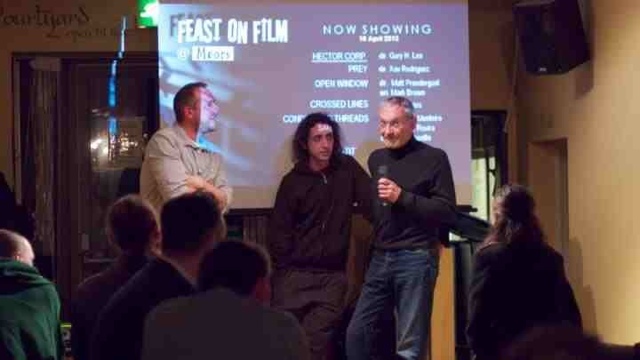 As everyone settled into post-screening chat and drinks, I had to run off. The long trip back to Reading was ahead – and I had been inspired. By midnight, I would have most of a short script in the laptop. Who knows, I could be showing something at the Feast On Film more soonly than you think…

Photos by Simon Aitken. Photo of Simon and Ben by Andrew David Clark. There’s more pics of the night on Facebook!

2 thoughts on “A Feast Of Film”