Sometimes, it’s tough not to come across as a film snob. I try to be inclusive and open – honest, really, I do. But in a pub earlier this week with MovieBrit Kate, I found myself uttering these immortal words about Aki Kaurismäki’s latest film, Le Havre: “I thought it was great. But you’d hate it.”

In my defence, I know Kate’s tastes. She has no patience for subtitled misery, and my delight in depressing foreign movies usually ends up with me on the wrong end of the finest display of lip-curling this side of Elvis.

But I do think I’m on safe ground when I say that Kaurismäki’s films are not for everyone. They’re deadpan, deliberately paced (oh, alright, slow) and deal with small stories set in poor locations acted out by sad, ugly people. 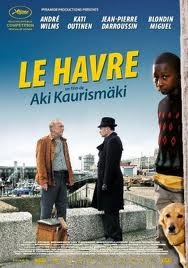 The thing is, all the points above are the reason that I love Kaurismäki’s work. His films are cut through with a bone-dry humour and a genuine sense of warmth. His characters have the patina of life, of history. They’ve been places. They’ve done stuff.

I often think of Charles Bukowski when I consider Aki Kaurismäki. They both feature barflys, bums, the downtrodden, the has-beens, the never-weres. But Kaurismäki teases a beauty out of the everyday that Bukowski can’t hang onto. He’s too busy yelling to see the quiet grace that comes out of a kind deed, a simple act of unexpected decency. Kaurismäki gets it, and it’s those moments that make his films a source of delight.

In Le Havre, we meet Marcel Marx, a shoeshine man working the streets of the titular poor French port. He comes across a young Ghanian refugee, who he feeds and shelters. Almost by accident, he decides to help the boy complete his journey to England. In some ways it’s a distraction: his beloved wife Arletty is in hospital and, unknown to him, dying of cancer.

It should be grim. Marx is an obvious loser who struggles to get any work and is often violently cleared away from his patches. Arletty will not tell him she is dying because she doesn’t think he can cope with the notion of life without her. You genuinely get the feeling that Le Havre is going to end tragically, as Marx blows his life savings on a plan to get the young refugee across the Channel, and the police led by the implacable Inspector Monet close in.

But things are never that simple in Kaurismäkiland. There’s always hope, even in the bleakest of moments. Deadpan does not mean dead in the water, and even if his characters never crack a smile, that’s no reason for his audience not to.

Le Havre is suffused with a gentle absurdism that lends the film an unexpected lightness of touch. I think it’s worth the price of admission to see Little Bob rock out at the benefit concert Marx organises (it says everything about Marx’s character that he would consider it a good idea to hold a charity do to raise funds to help smuggle an illegal immigrant out of the country). Monet’s tough guy approach is subverted when he marches into a bar looking for information armed with a pineapple.

Above all, Le Havre feels like a film out of time that could have been made at any time in the last 70 years. The themes – displacement, death, the triumph of love over despair – are universal. It feels like a movie that Robert Bresson or Buster Keaton could have made, or even David Lynch if he’d continued in the intriguing direction he took with The Straight Story. Shot on film, edited on film, composed with an uncompromising formality, Le Havre is still, I think, Kaurismäki’s most accessible film. Allow yourself to fall under its spell, and you will be rewarded. It’s not for everyone – but I should know better than presume that it’s not for you.