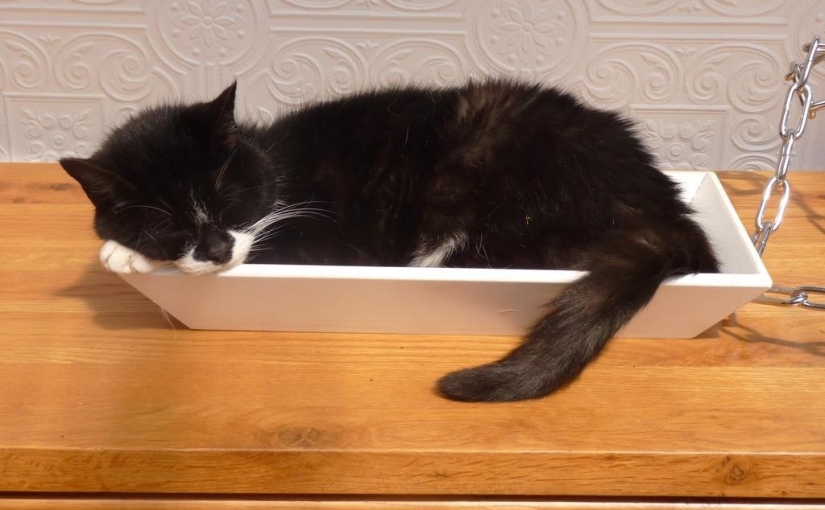 It's quiet. Too quiet. There's a sonic hole in the house, and I'm straining to fill it and I know I can't.

There's no distant thunk of the cat-flap as it's butted open. No clatter and crash as stuff is knocked off a high shelf or the top of a drawer unit. Worst of all, there's no honk and wail as a small hairy object barges into the room and insists on some attention. Oh, you're writing, are you? Here, let me sort that out by sitting on your keyboard. Isn't that better? Now, let's talk about my needs.

She left us on Monday, but to be honest she'd been making plans for a couple of weeks. We came back from holiday to find she'd moved in next door and made herself thoroughly at home. She'd pop in a couple of times a day for a bite to eat and a place to kip, but otherwise that'd be all we'd see of her. Typical bloody 18 year old.

So, when our lovely next-door neighbour knocked on the door, and told us that they'd found her in their back garden, the shock was lessened a little as we told ourselves that somehow she knew, that somehow she wanted us to know instinctively what was happening. She went peacefully, in a manner of her own choosing, and made sure that we wouldn't come across her by accident. At least, that's what I'm telling myself. That's what I choose to believe.

I had one last job to do for her, one last duty, and for that I was supremely grateful that DocoDom was around (again, did she know? Did she time it so that when the time came to dig the hole and wrap her in her favourite blanket, I wouldn't have to do it on my own?). I held my nerve. I was a man about it. My voice barely broke when I said goodbye.

Now, for the first time in 18 years, the house has no-one in it to bang about and make stinks and smells and purr in our ears and sit on our heads when we're sleeping and scoff our leftovers before we've actually finished eating. She was stubborn, eccentric to the point of lunacy, and almost impossible to reason with. She could win over just about anyone to her way of thinking. I'm still not sure whether she was stone deaf at the end or simply not in the mood to answer when we called. She was a genuine one-off, a soppy, talkative, bloody-minded, annoying, adorable little flea-bag. We were lucky to have so much time with her.

One thought on “A Eulogy”