The idea of the English road movie is almost laughable. 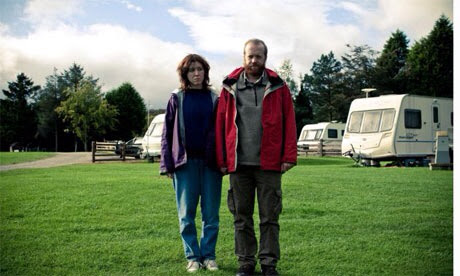 That is, the idea of a road movie set in a tiny scrap of land should be laughable. I mean, surely, the genre is all about distance, about the transformative qualities of travel, of getting as far away from home as possible and never ever coming back. You can't really do that on a trip up the M1.

Well, yes, kind of. But there's no reason for that transformative journey to necessarily have to be a coast to coast trip across America, or up the Orinoco, or through Europe. Scale is as scale does. It's the shift in the interior map that makes the road movie a success. As long as your main characters have changed when they get to where they were going, then it doesn't really matter how far they've travelled.

And that, my Readership, is what makes Sightseers the finest road movie you'll see this year.

Our sightseers are Chris and Tina, new lovers on their first trip away together. They load up a caravan and head off for a trip up north, shrugging off the protests of Tina's mum, who sees something nasty in the chubby, ginger man who has come to pluck her innocent daughter off the vine. Apart from the fact that he's chubby and ginger, obviously. Initially, we join the lovers in the shruggage; mum is clearly a possessive nutcase.

Except, of course, she's right. Chris is a killer, and one who understands that you don't need Jigsaw-style traps or tricks to kill. If you back a caravan over someone, they'll be just as dead as if you bleed them out in a convoluted fashion over a period of days. A normal person would run screaming from the set-up. But Tina has been living at home a little too long and makes her own erotic-wear out of crochet. She finds the whole thing to be a major turn-on, and all of a sudden we're looking at a Lake District version of Badlands, with worse weather and better scenery.

Sightseers is an absolute, unfettered joy from front to back. It's hilariously twisted, unflinchingly brutal and brilliantly written and acted. Steve Oram and Alice Lowe, who wrote the script out of years of improv and character work, inhabit Chris and Tina completely. When the two break the fourth wall towards the end of the movie, calmly gazing out of the screen, the chill that zapped up and down my spine nearly shook me out of my seat. Comedy has never been so un-nerving.

Ben Wheatley, on a roll from his micro-budget crime thriller Down Terrace and the creepy hitman horror Kill List, has quietly helmed one of, if not the, finest British movie of the year. Shocking, coffee-out-of-the-nose funny, gory and cruel, it's a film that should have you looking askance at every single caravan on the road next summer. I'm just waiting for the howls of protest from the Caravan Club.