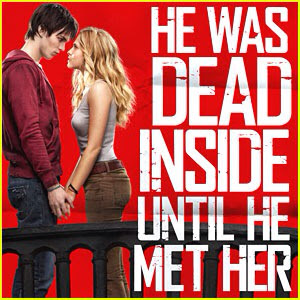 We are legion. We congregate in the dark, seeking… fresh meat… new blood.

Our eyes have witnessed countless deaths, innumerable maimings, and no small number of castrations. And now a collective groan rises from the gore-soaked horde; for we are horror fans, and we have just heard the words, “The New Twilight”, used in association with a new zombie movie.

Meanwhile, fans of ‘Twilight’ – or Twi-hards if you prefer – wait with bated breath to see which of a number of competing movies can possibly take the place of their beloved franchise. Team Edward and Team Jacob are spoilt for choice this year. Within the space of two weeks they’re getting both ‘Warm Bodies’ (Twilight with zombies), and ‘Beautiful Creatures’ (Twilight with witches). Then, later in the year comes the adaptation of ‘Twilight’ author Stephenie Meyer’s novel ‘The Host’ (Twilight with aliens). First up: ‘Warm Bodies’.

‘Warm Bodies’ is a Rom-Zom-Com (to use the term coined by Edgar Wright to describe his breakthrough hit ‘Shaun of the Dead’) adapted from Isaac Marion’s novel by writer/director Jonathan Levine (‘50/50’; ‘All The Boys Love Mandy Lane’). It tells the story of R (Nicholas Hoult – ‘X-Men: First Class’; ‘A Single Man’), a zombie who retains a tiny spark of humanity, despite his craving for human flesh. When R meets Julie (Teresa Palmer – ‘I Am Number Four’), a human survivor, he falls in love. R attempts to win the affections of Julie, facing opposition from both his undead kindred, and the heavily-armed humans lead by Julie’s father Grigio (John Malkovich – ‘RED’; ‘Burn After Reading’), who want to shoot him in the head.

So is ‘Warm Bodies’ the new ‘Twilight’? In short: No. Despite casting a lead actress who looks like a younger blonder Kristin Stewart, and having a male protagonist who practices abstinence (of the flesh-eating kind rather than the sexual kind), this lacks both the central love triangle and the sexual chemistry of the first ‘Twilight’ (the only one of that franchise I’ve seen). Regrettably, where it most closely resembles ‘Twilight’ is in its taking of a horror staple and sanding off all the rough edges until you’re left with something NOT-horror. Something… sparkly.

For a movie that snags memes from numerous zombie films, there’s little actual ‘Zom’ in this Rom-Zom-Com. Its one innovation is to divide the zombies into two tribes: ‘normal’ comparatively pretty zombies and the ‘Bonies’ – the inhuman skeletal CGI menaces they eventually devolve into. How fresh this film seems to you will largely depend on how much of a genre fan you are. Hardcore horror fans will recognise the rest of the ‘new’ ideas in ‘Warm Bodies’ from other movies:

The list goes on… We also get yet another re-tread of the tired ‘human pretends to be a zombie to fool zombies' bit from ‘Shaun of the Dead’ and an amusing visual reference to ‘Zombie’ (aka. Lucio Fulci’s ‘Zombie Flesh Eaters’).

‘Warm Bodies’ sets up Romero-esque slow moving zombies (R comments wryly on how slow and un-coordinated he is in one of the funnier passages of voiceover). However, it constantly bends its own narrative rules whenever it needs to. Being chased by fast-moving Bonies? Suddenly the ‘normal’ zombies find a burst of speed. Keeping the exact nature of the zombie evolution nebulous means the film just about gets away with these inconsistencies.

Just as Jonathan Levine’s movie uses its zombie film trappings to disguise a conventional Rom-Com, it similarly uses its other main source as mere window dressing. ‘Warm Bodies’ is a very loose adaptation of Shakespeare’s ‘Romeo and Juliet’. All the main movie characters have been named after counterparts in the play. Thus Romeo becomes R, Juliet – Julie, Mercutio – M, and so on. There’s also a version of the famous balcony scene. But just as with the zombie source material, anything from ‘Romeo and Juliet’ that’s dark or passionate or difficult gets jettisoned.

If you can put all of that out of your mind, ‘Warm Bodies’ is a sweet teen romantic comedy. Nicholas Hoult is a warm and charismatic lead, and his voiceover is gently amusing. There’s nice comic support too from Rob Corddry (‘Hot Tub Time-Machine’) as R’s best mate M, Analeigh Tipton (‘Damsels In Distress’) as Julie’s BFF Nora, and from the ever reliable John Malkovich who voices every horror fan’s exasperation with the woolly thinking behind the zombies’ evolution: “They haven’t suddenly become vegan!” Also, there are flashes of wit and self-awareness (see the use of Rob Orbison’s song ‘Oh, Pretty Woman’). This may very well be the first zombie movie made that my Rom-Com loving Mum would like.

The irony here is that ‘Night of the Living Dead’ and the other key New Wave of American Horror movies (‘The Texas Chainsaw Massacre’; ‘The Last House On The Left’) were angry punk films made by disillusioned hippies. ‘Warm Bodies’, on the other hand, is a drippy hippy movie that preaches that love can transform even those who are dead inside. However, the poisonous subtext here is that those who are unable to open themselves up to love are labelled evil and brutally exterminated. Also, this is a movie where beauty is equated to goodness, and ugliness to evil.

Not so sweet after all. Like the High Priest of Punk John Lydon said: “Never trust a hippy.”