Sometimes, even hardened atheists like me have to wonder if there's a guiding hand nudging me in the right direction. 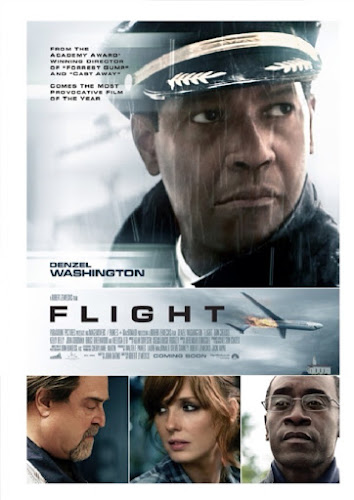 It was a simple, straightforward plan. Run a few chores, cycle to the Post Office and be in town in time for a 10:40 screening of Wreck-It Ralph. It was a cold, breezy day, and Disney felt about my speed. All was going well until I tried to buy a ticket. There was no 10:40 Wreck-It Ralph. I'd misread, or there was some scheduling fubar. If I wanted to catch some animation, I'd have to hang around town for a couple of hours.

The alternative was a screening of Robert Zemeckis' latest, Flight, due to start ten minutes later. Not what I'd planned, but hey, embrace the chaos, go where the wind blows.

Readership, Flight is probably the best film I've seen so far this year. Talk about the luck of the draw.

Meet Captain Whip Whittaker. Flyboy, charmer, maverick, played by Denzel Washington with the crumpled wit of Robert Mitcham and the smooth charm of Al Green. He's also a hero, and we're with him as we find out why. He's the pilot of a domestic flight that fell apart in the sky. He safely landed it, saving nearly 100 lives.

The thing is, we're with Whip before the flight too, and we know something that everyone else initially doesn't: the guy's a drunk. He's chugging vodka on the flight deck, and buzzing on coke. In normal circumstances, he would be a threat to everyone around him. But this is a one-in-a-million deal, and he's the only man for the job.

Flight is about a plane crash in the same way that Taxi Driver is about Yellow Cabs. It's a fascinating study of addiction, of faith and of predestination. Whip is a high-functioning alcoholic, who goes through bouts of remorse and pledges to give up that never take. He's a liar to himself, to everyone he loves and to the world. And the thing is, he gets away with it. The thing is, everyone wants him to get away with it. The investigation into the crash has Don Cheadle's smart, tenacious pilot's union lawyer nibbling away at the awful facts at the heart of the case, blanking and nullifying toxicology reports, putting the blame on everyone except Whip. Which would be fine, if Whip would play ball. But Whip is purely self-destructive. If he can help himself, if he knows what he's doing, his innate sense of honour won't allow anyone else to get hurt.

The exploration of the addict's mindset is beautifully picked out in Flight. The gods-honest promises to change, the inevitable slide-backs, the furious declarations that this is all, somehow, a matter of choice. “I CHOOSE to drink!” Whip bellows at his girlfriend Nicole, played with bruised, fragile sweetness by Kelly Reilly. We see through his bullshit in an instant, because Nicole is an addict too. The difference is that she has embraced the willingness to change.

It's the element of inevitability at play that makes Flight such an interesting film. Does Whip choose to drink, or does the drink choose him? It certainly seems to, even on the night before the hearing that will seal his fate, when he's supposedly locked in a hotel room with a dry bar. He finds booze, and there's never really any question that he'll put the bottle away once he knows it's there.

But was there a guiding hand that led Whip onto the flight that would change his life? His co-pilot seems to think so. A deeply religious man, he's convinced that, drunk as Whip was, no other man could have saved those hundred souls. He's not the only one. The aviation authorities run tests with ten pilots in simulators. No-one else could land the plane in the way Whip did. Which brings up a very interesting question. Was it Whip's flyboy skills that put his plane safely in a field, or was it that the booze and drugs in his system kept him calm and allowed him to make unorthodox decisions? There's a moral ambiguity here that Zemeckis and his writer John Gatins leave unanswered right up until the very last moments of the film, when Whip gets the chance to prove what we've suspected all along; he's an honourable man who won't let anyone else take the blame for his mistakes.

Flight is an astonishing piece of work. Tense, funny, sharply observed and played by a crack team of actors, at times utterly jaw-dropping. The plane crash is career-best work from Zemeckis, and had me grabbing the arm of my seat in dizzy panic. But the final hearing is as tense and thrilling as the opening setpiece. If anything, it's more riveting, as you're witness to a man battling for, and regaining, his soul. Whip Whittaker is a complex man, and Denzel Washington nails everything about him, bringing out the ugly with the heroic. Watch out for John Goodman too, who steals every frame of screen time he's in as Whip's drugs guru and enabler.

The smart money seems to be on Spielberg's Lincoln sweeping the board at the Oscars later in the week. I'm not so sure. With a central performance this good, I think Messers Zemeckis and Washington could provide a bit of a surprise on the night.

In the meantime, I'm going to start pitching up to the movies a little more randomly. I like being surprised, especially if the end result is so good.