Everyone else is doing it… so shall I.

1. Much as I hate to agree with Oscar, I thought the choices for Best Film and Best Director were about right. Argo is a great, great film, but it's directed with a very light touch. This isn't a criticism. It's fantastic to see how the man once known as Bennifer has matured as a film-maker. But that understated skilfullness whistled right over Oscar's head. It wasn't directory enough. Not enough fancy bells and whistles. Life Of Pi, on the other hand, is a rotten film with a solid directorial vision stomped all over it. The Oscar judges, as we know from bitter experience, don't do subtle. Argo is by far the more skilfully directed film, but it doesn't have pretty colours or a dancing tiger in it.

2. Clive and I have already posted our disquiet about Quentin Tarantino's script for Django Unchained. (If you've not read our opinion, it's here in all its bloated, overwritten glory) and it seems we're not alone. Jesse Williams, a writer and actor with some serious historical creds has posted an epic takedown of the film here that's essential reading, I think. If you're on Twitter, it's also worth looking at @mypdfscript at the moment, who's enjoying some… shall we say robust discussion with Tarantino fans over his dislike for the movie. I'll just repeat what I said at the time; DU is over-long, bloated and not half as clever or insightful as it thinks it is. A poorly constructed mess that shouldn't have even been in the running.

3. Daniel Day Lewis. Of course he won. He's playing a beloved icon of American history in heavy makeup. Short of having Tom Hanks drag up as Susan B. Anthony, there was no way this was going to anyone else.

4. For the most part, Oscar night was as predictable and pedestrian as always. Adele won for Skyfall – yeah, it's a great song, but there wasn't any meaningful competition. Yay for Christophe Waltz, who proves his chops by making Tarantino's dialogue into something of profound beauty. Haneke was always gonna win for Best Foreign Language film. Sugarman was a lock for best documentary. Paperman had no competition for animated short, although in the long-form category the Pixar skew was a bit unfair this year with strong competition from the stop-motion camp. In general, though, we can sum up with two musical quotes; no alarms and no surprises. Same as it ever was. 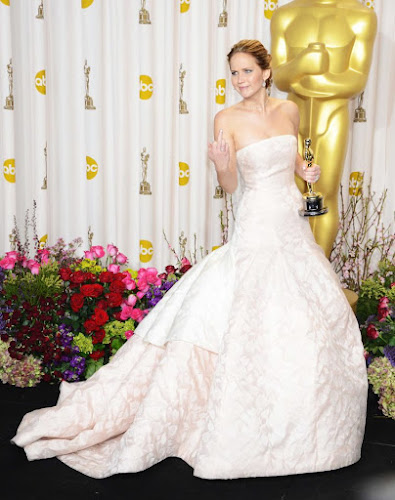 7 thoughts on “A Few Quick Thoughts On The Oscars”