Something from the archives.

Actually, this is brand new, in that it's the first time this piece has been published. It was submitted for the sadly-defunct Dirty Bristow magazine. I found it on a trawl through my Dropbox and… well, it's worth sharing, I think. 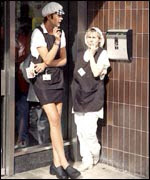 Cigarettes have ruined smoking. Seems like back in the olden days, before your Wiiboxes and talking self-parking cars and magic blue-fluid-guzzling panty liners, smoking was as much an art as a pastime. It was done with a flourish, with a certain chutzpah, and with all kinds of cool gadgets.

Like any addiction, the paraphernalia is as important as the act. Fancy side-opening boxes that look a bit like the magazine for an M-16 and day-glo lighters simply don’t cut it, compared to the smoking fun you could have back when whale hunting and child prostitution were seen as good things.

Pipes. Pipes are cool. Slender, long-stemmed clay jobbies, just the thing for the discerning hobbit that wants to get high. Big fat scrimshawed Meerschaums, monstrous curvaceous chimneys, perfectly accessorised by a walrus mustache and an eyepatch. With one of those things sticking out of your face respect is not just due but offered up as a matter of fact.

Chewin’ tobaccy. Why bother smoking the stuff when you can eat it? Jam a wad of rough shag in-between your molars and you have a delicious taste treat that will make you look like the guy that made Ned Beatty squeal like a pig in Deliverance, and allow you to spit like a camel. Seriously, if you ever felt the urge to gob in someone’s eye, try it with a chewsky backup. That stuff can sting.

From hookahs to snuff, there are so many ways of getting the nicotine tingle into the system that cigarettes seem like a shabby afterthought. I rarely partake myself, although I can be talked into shoving a cigar into my gob when the moon is in the seventh house (i.e. I’m drunk).

I love the way it’ll take all night to work through the dense sausage of leaves, huffing clouds of thick smoke, making me look like a gangster or a slightly less corpulent Winston Churchill. I love the Tom Waits-chewing-gravel tone that my voice takes on the following morning. Cigars also make my breath stink like a cancerous rat that’s been at an ashtray. It’s the glamourous aspect that attracts me, you can tell.

The cigarette, on the other (orange-fingered) hand, debases the whole experience. It’s a quick hit, a scrambled gasp. The sort of thing you can wolf down on the walk from the train station into work. It’s the packet of crisps of the nicotine world. The Happy Meal, compared to the haute cuisine of the hubble-bubble loaded with fine apple tobacco. Not so cheap, and very nasty.

Which brings me onto my central gripe. Finally. The cigarette has taken the whole nicotine experience, stuck it in cheap packaging and turned it into a go-anywhere, have anytime experience (or it did until that there gubmint started a-messin’ with our rights to kill ourselves in the way we feel fit). And because we can, we must. It has become, somehow, a god-given unassailable right to slope out several times a day for a fag break when you’re at work.

The cigarette has taken the mystery and ritual out of tobacco. So the fag break has evolved into a way of re-introducing the theatre into the act. You cannot simply stand up, announce “I shall now partake of a Rothman’s King Size”, and march out to the fire escape. No, you must have a little shadowplay first. You must catch the eye of every other smoker in the room, and do a mime, puffing imaginary smoke rings into the air, furiously waggling your eyebrows. A positive response to this and off you go, hands already delving for the pack of twenty, skipping off with your pals to the wind-scoured corner of the company grounds that have been ring-fenced for the activity. Leaving the rest of us to take up the fucking slack.

The thing that bugs me, the thing that really knots my y-fronts, is the way that Fag-Break Club has it's little secrets. What's said at Fag Break stays in Fag Break. There could be all kinds of juicy gossip, scandal and honest-to-betsy revelations coming out in the corporate smoke shelter, but I won't know anything about them. If I ask what everyone was giggling about when they came back into the building, I get a fob-off and a hand-wave and an airy, “Oh, it was nothing, just a bit of silly, you had to be there really.”

Yeah, right. Tried that. I've crashed that little party once or twice. You and your mates with your coffin nails and me with my froffocaffochino with extra sprinklies. I've tried to be down with the cool kids, huddling up as a cold blast straight from the throat of Siberia tears through the shelter. When I'm around, the conversation dries up, doesn't it? Then it's all grunts and mutters and sighs and looking at watches and “well best get back to it”, isn't it?

Don't think I don't know what's going on, you nicotinious bastards. You're blowing me off in the same way that you puff perfect smoke rings. As soon as I'm not around it's party time again. The future of the company could be decided out by the back loading bay, and I wouldn't know because I choose not to bankrupt and poison myself. Keep Coffee Boy out of the loop. Not one of us. His teeth are entirely the wrong colour.

Well, two can play at that game. Ok, only one at the moment, but it's early days. I've got my club too, my own special secret society, and only cool guys like me that like their coffee hot and milky and overaccessorised can join. We're tucked round the corner from the smokehouse, just within earshot, so I'll know when you start talking about me. It'll be any day now, I'm sure.

Me and my doublechoccolattiato can make up all the gossip we like, and I'll walk back in laughing loudly at the brilliant joke I made up and none of you yellow-tongued cretins would get it even if I told you, which I'm not going to. You'll see. We'll show you. This isn't school any more, and these aren't tears. It's just that the wind has blown your smoke into my eyes.