I've always worked unusual shift patterns, which mean I get days off in the week. At least one of those is a cooking day, where I cogitate over a bubbling pot of deliciousness. Those days are gone. 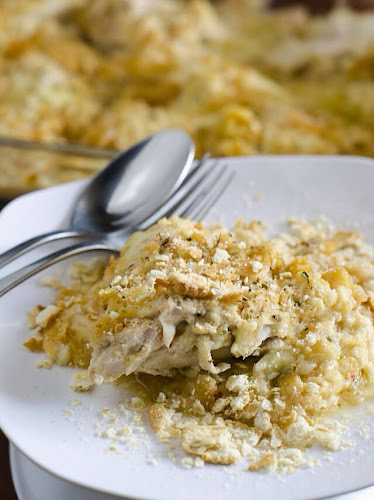 OK, slightly overboard on the melancholia, there. What's happened is this: I've been moved onto a shift that puts me at work for four days a week, Friday off. Yeah, boohoo, poor me. That means I have to rethink how I cook to a certain extent. The slow-cooked stews, ragus and curries I normally delight in will have to become a weekend thing. Monday to Thursday, I'll have to speed the process up a bit, or TLC and I will be eating just before bedtime.

Here's a meal I came up with over the weekend as a way of clearing out a few leftover bits and bobs in the fridge (breadcrumbs, stock, some risotto that I fried gently in a pan as a side, making fragile patties). It has the virtue of being quick, easy and tasty: the holy trinity of weekday cookery. I used chicken thigh fillets, but feel free to use breast if you'd rather.

Get your oven up to heat, 200C. While that's happening, thinly halve and slice an onion, and cook it gently in a little oil for 5 minutes or so, until softened. Meanwhile, pop your chicken, sliced into decent chunks (say a couple of forkfuls per piece), into an ovenproof dish, along with a couple of sliced mushrooms. Once the onions are ready, slather them over the top of the chicken and mushrooms, and then pour over some stock. It should come to about halfway up the chicken.

Pop the whole lot in the oven for 10 minutes or so. While that's puttering away, blitz a couple of slices of bread in a food processor to make coarse breadcrumbs. The older the bread the better, but do chop off any green bits. Coat the crumbs in a little oil.

After the 10-20 minutes, loosely cover the chicken with the crumbs, then back in the oven the whole lot goes for another 10 minutes.

That's it. The end result won't be too wet, as the crumbs will have soaked up some of the excess stock as they crisp. It's not too heavy a meal, but there's a nice mix of textures with the crunchy crumbs playing against the soft chicken, and the flavours are amazing. Serve it with some simply steamed spring greens and maybe some rice if you're starving.

Tweaks? You could try this with a thick slab of salmon: if so you can skip the initial cooking stage, and give the onions a little longer in the pan before they go over the fish. Maybe layer a soft melting cheese over the chicken just before the breadcrumbs go on, or jazz up the crumbs with herbs (thyme and parsley work well) lemon zest and a dusting of parmesan.

Maybe weekday cooking won't be so tough after all.