Mother's Day is one of those notoriously tough dates in the catering calender.

It's a massive money-spinner, for sure. A sure-fire way of getting big groups in through the door, and spending like crazy to make sure that dear old mum is well fed and watered, (and while you're at it, assuaging some of the guilt for the shit that you put her through for the other 364 days of the year). Get the balance right, and you're guaranteed return business for years. Get it wrong and…, well, let's put it this way. Would you want to get on the wrong side of your mum? There you go then.

TLC and I had taken the car up to the sunny Midlands to visit her mum. The Nuneaton area is famous for its fine array of eating pubs, and I was very happy to see that a family trip out had been arranged to one of mother's favourites. She's got a keen eye for good places to eat and a bargain, does our Pam. And this time around, she did us proud. 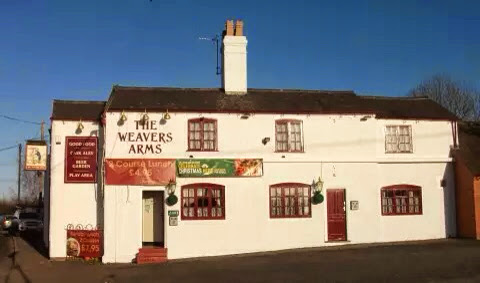 The Weaver's Arms in Fillongley, perhaps fifteen minutes drive from Nuneaton, is one of those places that you just know is going to be good as soon as you step inside. It had been recently refurbished, but without any concessions to trendiness. It feels clean, inviting, and instantly familiar.

We were quickly seated, and drinks orders were taken and served up in moments. A decent range of beer on tap (always my focus) included Old Speckled Hen and a local favourite, Bank's. The Weaver's were running a cut-down menu for Mother's Day: understandable as they were slammed. We'd barely squeezed in with a mid-day booking. However, the “limited” choice included a roast with a choice of four meats, steaks, two kinds of fish, cajun chicken and a kid's menu. Not too shabby, although there was no sign of a vegetarian option. I have a feeling they'd have something in reserve, though.

Food service was a bit on the slow side–again, understandable on Mother's Day. Perhaps it was just that, as the clocks had gone forward and we were lunching so early, I'd had hardly any breakfast and was bug-eyed ravenous. The grub, when it arrived, was spot on. The roasts were piled high with goodies, and they'd somehow even managed to make Pam's turkey moist and flavoursome. The steaks were solid, locally sourced and cooked to perfection. I'd had a sudden urge for fish and chips, which was done to a turn in a home-made beer batter.

We all finished off with a pud. Syrup roly-poly, spotted dick, treacle or chocolate sponge: now was not the time to be faint-hearted. All with custard, of course. Utter heaven. At the end of the meal, all the ladies in the party were presented with flowers–which especially amused the one that wasn't a mum.

We rolled out of the Weaver's into soft sunshine feeling very much at one with the world. Our feed, for three couples and a pair of hungry boys, came to less than £100. Service throughout had been unflappable, friendly and unfussy, much like the pub itself. It's heartening that there are places like this around, in an era when more and more local pubs are closing every week. Pam tells me that their normal menu is chock full of wonders, which makes me very keen to go back.

If the Weaver's can nail one of the trickiest days on the calender and make it feel easy and light, then that bodes well for their everyday service. I think I'll be back next time we're in the Midlands. The steaks looked delicious.