Coffee: the most important meal of the day.

If I was offered a stark and uncomfortable choice—give up on my morning cup of java or lose one of my little toes—I'd have to think long and hard. But you, know, screw it. I never use l'il pinkie for anything uselful anyway.

Ah, coffee. Sweet morning elixer. Magic potion of wakefulness. That cup of go-juice that has fuelled so many words. As I write this, I have a sippy cup of homebrew by my side, which I suck on with the fervour of a youngling at its mamma's teat. It's a grey commute indeed that does not have a coffee to dull the pain of the front end of the working day. It's a well-known fact that creativity has two drugs: booze to spark the muse, and coffee to fire up the motor that gets the actual work done. Without coffee, I would not be the precision-honed writing machine you see before you. We all have our crutches. Mine is hot, black and sweet.

Over the years TLC and I have owned many different coffee-making devices. From stove-top mokkas to the ubiquitous French Press, to a hideously expensive and complicated Bodum espresso machine that looked like a thinking machine from season one of the original Star Trek, we've had them all. DocoDom swears by the simplest of vectors, a pour-over filter. It does, to be fair, make outstanding jolt-juice.

I have finally put together a system which is, without fuss or trouble, brewing the best damn coffee I've ever had. For a final outlay of around £75, you too can drink coffee the Excuses And Half Truths way.

There are many variables that need to be considered when brewing coffee. But the most important, the coffee triangle, if you like, are grind, temperature and bean. All have influence on each other, and the end result. It's no good having the best beans in the world if you grind them too coarsely and dump boiling water on them. You'll end up with a thin, bitter drink. If you have control over the coffee triangle, then you're on the way to a transcendent cup of joe.

Notice I say grind. I don't buy pre-ground coffee. Haven't done for years. Control over the variables, remember? How can you get the grind you want if someone else is doing it for you? So, the first major cost outlay towards that £75 coffee—a decent burr grinder. DeLonghi and Krups both do good ones for thirty quid or so. Burr grinders give you an evenly-ground coffee with precise control over how fine or coarse it ends up. Blade grinders are like going at your precious beans with an axe. They're fine for whole spices but please, not for the most important drink of the day.

The other half of the equation for me is the Aeropress. Devised by the mad genuis who brought us the Aerobie frisbee, this takes your caffeination to a whole new level. It's basically a piston with a filter on one end. Coffee and hot water go into the thicker tube. The thinner, which has a rubber bung on the end, pushes the brew through the filter. It won't give you espresso pressure, but it's not far off. It's solidly built, simple to use and cranks out cup after cup of smooth, rounded flavour.

The only other addition to the batterie de caffeine is unessential but does make a difference. The Aeropress comes with a stack of paper filters, but you can spend a tenner on a laser-cut metal filter disc that will last for ever and does have a beneficial effect on the oils that you're extracting. Coffee using the disc somehow tastes a little smoother to me. But you can manage perfectly well without.

Alright, let's make a cup of coffee. First, grind your beans. Use what you like. As a rough guide, African beans tend to give a fruitier flavour, South American skewing more towards the rich chocolatey end of the spectrum. Whatever floats your boat.

An Aeropress grind isn't quite as fine as espresso, but set your burr grinder to the finer edge of the scale. I tend to do enough for a couple of days, and keep the remainder in the fridge. It's fine as long as you don't keep it hanging about for weeks.

Pop your ground beans into the big tube of the Aeropress. Two scoops, which works out to a couple of tablespoons. Put the Aeropress over your mug of choice. Sturdier is betterer. You're going to be putting some weight on that in a minute. Switch on the kettle, and let the water come back off the boil. You'll hear when it stops bubbling. That's the perfect temperature.

Hot water over the beans. Halfway up the tube will give you a decent double shot. I tend to go all the way up, for a stronger-style Americano. Stir for ten seconds. The mix will bubble as nitrogen is produced, and you'll notice the crema, the caramel-coloured head that's the mark of all good coffee, forming. After the stir, pop on the plunger and let it sit for thirty seconds or so. Some writers advocate a three minute brew, but they clearly prefer lukewarm coffee. Not me, and besides, I'm doing this before heading into work. The clock's a-tickin.

Thirty seconds is up. Let's plunge. Gentle, steady pressure. Now you see why I said to use a sturdy mug. Once you hear the hiss of trapped air, stop pushing. Your coffee awaits.

Cleanup is a snap. Push the plunger all the way to the end, and unscrew the filter cap. There's a plug of dry, compacted coffee that just needs to be pushed out into the bin—remember, though, that spent coffee grounds are great in compost. The rubber bung has already cleaned the plunger through, so you just need to give everything a quick rinse and you're done. Coffee time. If you like, top it off with some more hot water or milk. Personally, I take it black with a shot of hazelnut syrup. The coffee is rounded and silky, and there's no bitterness. It's a revelation, and makes anything from yer chain caffeination station seem a bit, well, *lacking*. This is the stuff, the real deal. So simple, and yet so right.

Coffee geekery is fun, and you can be really playful if you want. With Japanese pour-over jugs, brewing vessels that look like they should be in a chemistry lab, and insanely strong cold-brew infusions like the infamous Black Blood Of The Earth, it's never being easier to buzz yourself up in style. For me, though, the Aeropress gives a pure, direct blast of mainline power and flavour.

If you're lucky enough to be in Reading, the buzz in town is all about Tamp Culture, coffee roasters par excellence, who are brewing out of a cart by the Oracle shopping centre using the Aeropress. Worth checking them out if you want to see what I'm honking on about before taking the plunge yourself.

Now, if you'll excuse me, it's time to top up the tank. I needs to get my twang on. 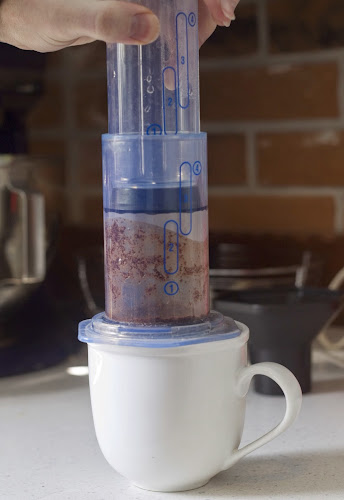