In talking and thinking about Blake’s 7, you can’t help but wonder what a reboot would look like. There have been several aborted attempts to get the show back on the small screen, with Sky, Syfy and Microsoft’s Xbox Channel all enthusiastically ordering and then un-ordering seasons. Battlestar Galactica is a great example of a reconsidered universe, and that’s the example that everyone wants to emulate. But how would you do it? Well, I’ve had a few ideas…

Blake’s 7: The Next Generation

The Federation is a benevolent, inclusive democracy. Her citizens, spread across hundreds of worlds and thousands of light-years, enjoy a peaceful and fulfilling life where all their needs and wants are met, where they can be the people that they truly wish to be. There is no crime. There is no poverty.

At least, that’s what the Federation has drugged its citizens into believing. Calming agents in the water. Soporifics in the air. Every psychometric trick in the book is used to ensure that the Federation never meets any sort of resistance. Why would you rebel against a perfect life—even if it’s just in your head?

Meet Roj Blake. A senior supervisor in Federation Control, and one of the few to know the truth: that the Federation is not the force for good that its citizens believe. People are worked until they drop, but do so cheerfully, content in the sure and certain knowledge that they are happy.

Blake is not a nice person. He makes sure that the model fits, even if he has to hammer it into place. His job is to find the half-percent of Federation citizens who are immune to the cocktail of drugs and indoctrination, the potential threats. They’re called Clears, and the reason that Blake does what he does is because he’s one himself. He can see through the faked bliss, the flick of the eye that betrays what a Clear is really feeling. The thing is, he believes in what he does. He honestly thinks that he’s doing it for the greater good. He’s a zealot, a true believer in the cause of peace by any means.

But Blake the enforcer runs into problems. An operation he runs on the Saturn colonies goes hideously wrong, and people die. Lots of people die. The Federation needs a scapegoat, and Blake has outlived his usefulness. He’s put out to dry: a show trial condemns him as a paedophile terrorist with a homicidal tendency a mile wide. His wife and children refuse to see him. His life collapses around him, and the scales fall from his eyes. Blake realises that he’s been as much of a dupe as the citizens upon which he predated.

As a sop to his service with the Federation, he isn’t sentenced to death. Instead, he’s given a life-plus-twenty jag on the prison world of Cygnus Alpha. The transport leaves an hour after the trial finishes. Blake is wiped off the world like chalk off a board.

On the ship, Blake meets more of the people he has been defending the Federation against. Jenna Stannis, a pilot and smuggler. Space-born, she’s never needed to set foot on a Federation world for long enough to allow the loyalty measures to take hold. With her is her co-pilot, Gan, the muscle, with the quick mind of a hostage negotiator. Together they have talked their way through trade blockades and out of arrest by customs ships. Until now, that is. One over-zealous border guard gets greedy, and Jenna and Gan end up as prisoners—fresh meat for Cygnus Alpha.

The trio are quickly glommed onto by Vila, a skilled cut-purse whose moral inadequacies and low cunning mean that conditioning never sticks. He’s too much of a survivor to believe the hype. He also sees in Blake, Gan and Jenna safety and security on a barge full of murderous lifers. Gan sees something he likes in the quick-witted little pick-pocket, and the two are soon fast friends.

Blake soon makes an enemy: Kerr Avon, AI specialist and network rider: a thief who trades in data. He lives his life by two rules: survival is key, and anything that stands in the way of that is a barrier to be dodged or broken. The two take an instant dislike to each other. They’re too alike for their own good.

The prison ship London, en route to Cygnus Alpha, flies into the middle of a battle between Federation pursuit ships and… something that is not on the resource libraries. It destroys the Earth craft, but is heavily damaged. The ship’s captain, smelling a healthy bounty, decides to send a salvage crew across. Why waste valuable crew members when he has holding bays full of the condemned? He makes his choice: the disgraced ex-Federation officer, the girl smuggler and the computer geek. If anything happens to them, it’s no loss to anyone.

The alien ship is vast and silent, strangely shaped but clearly very powerful. Tethered to a line and rappelled across, Blake, Jenna and Avon can see heavy battle damage. The scars of combat seem to be disappearing as they watch. As the three close on the hatch they see the cause: a swarm of tiny insect-like machines that heal the ship’s wounds astonishingly quickly.

They enter the ship. Cathedral-like with seemingly endless corridors, it’s an eerie place. The three agree on one thing: it feels as if they’re being watched.

And also guided. The find themselves in a high-vaulted space that has to be a command centre and flight deck. Control stations surround a ten-foot wide globe, made from a marbled material that seems to swirl as they look at it. Jenna checks out the main flight units. They seem strangely familiar, and she swears that they change configuration under her fingers. One thing’s for sure—she’s quickly certain that she can fly the ship.

Suddenly, the three hear a voice: flat, unaccented and in their heads. The globe brightens, lines and dots of light flaring across the surface in time with the calm tones of the ship. For the globe is the access node for the great alien craft, voice-activated, allowing every aspect of its operation to be controlled with a single command. It knows Jenna, Avon and Blake’s names. In a limited sense, it can read their minds.

It calls itself Xen. And it plucks a new name for the craft out of Jenna’s thoughts: LIBERATOR. Jenna shrugs. It’s appropriate—the Liberator is their ticket off the death sentence awaiting at Cygnus Alpha. Carefully, she breaks the connection with the London, moves the ship out of range. The temptation is to run, but Jenna needs her co-pilot and, as she points out to a seething Blake, she’s the one flying the ship. 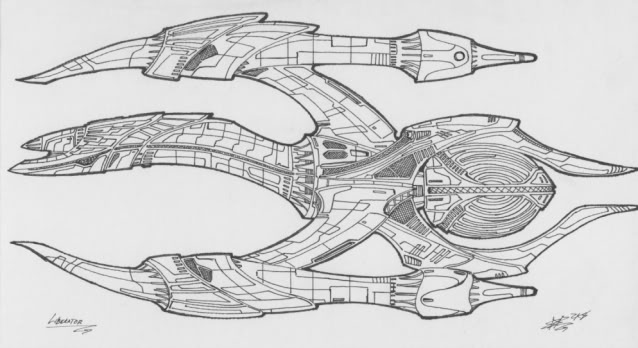 They follow the London to Cygnus Alpha. Blake and Avon, geeking hard, explore the ship. They find weapons, communication bracelets. Looking for a shuttle on which to make planetfall, they find something even better: a teleport. The Federation have been working on experimental bi-locators for years, but their best results have turned test subjects inside out or cooked them whole. The Liberator’s teleport looks well-used. Blake risks it, and Xen puts him onto the wilderness world of Cygnus Alpha.

The planet has gone rogue. The guards of Cygnus Alpha have devolved into petty-colonial demagogues, using the deliveries that regularly arrive as slave labour… and food. Blake is captured, and only escapes thanks to Gan and Vila, who use their skills to sweet-talk the guards into a trap and break out. In a fit of rage, Blake slaughters the leaders, telling the prisoners of Cygnus they are free to live their own lives. He, Gan and Vila teleport away, leaving the shattered colony to pick up the pieces. Blake feels his actions are justified: after all, there wouldn’t be room for everyone on the ship. But, as Gan reminds him, he hasn’t saved Cygnus Alpha. He may have just replaced one hell with another.

This moral ambiguity is at the heart of my vision for the show. Blake is no hero. He’s driven by revenge: he wants to see the Federation fall not because they are a dictatorship, but because they have destroyed his life. But because he knows the Federation, because he knows many of the secrets the regime would like to keep quiet, he persuades the others to stick with him. They become revolutionaries as they see the true shape of the Federation’s rule, but the heart of their mission is Blake’s black, cold thirst for payback. His missions frequently leave behind worlds more damaged than when he arrived.

As they harry the Federation forces, attracting the attention of Head Of Security Servalan and her cyborg sidekick T.R.A.V.I.S (Track, Recon, Appropriate, Verify, Interrogate, Silence) it becomes clear that the Federation is hiding something big. A secret that involves an alien species called the Auron (one of whose number, a telepath called Cally, joins the crew as a keen resistance fighter) and an AI called ORAC. ORAC controls the Federation’s defence systems, which seem ridiculously over-specced for an empire whose citizens are uninterested in rebellion.

The awful truth becomes clear: The Federation is at war. They keep the citizenry drugged to quiescence to save them from the truth. They are barely holding the line against an implacable enemy from the distant galaxy of Andromeda—the civilisation that built the Liberator. Worse, the Aurons are agents for that civilisation, using their telepathic powers to worm their way into the heart of power. Cally, too, is a traitor, guided by the Auron to retake the ship. For the Liberator is the flagship of the Andromedan fleet, and the only craft that is possibly able to beat back a full assault. 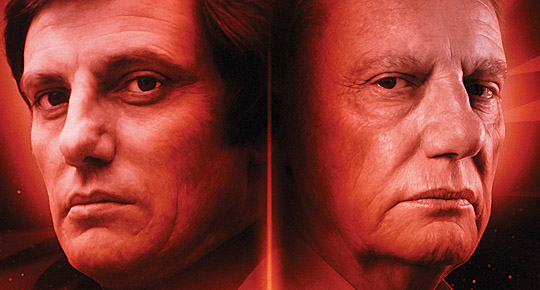 As the battle lines are drawn, Blake and his crew find that there are greater enemies than the Federation, and that war brings about strange alliances. As war tears the galaxy and everything Blake believes in apart, he finds he has only one choice: fight.

There’s my outline. But how would you cast it? Coming up, our thoughts on who could be the new crew of the Liberator…

One thought on “Blake’s 7: The Next Generation”