There's been a lot of talk about Blake's 7 recently. It's made me real hungry.

We're deep into meat season. The sun is high, the weather is hot, and all over the country people are burning sausages on the barbecue. Tempting as that might be (and don't get me wrong, I enjoy a nice steak fresh of the griddle as much as any other red-blooded Englishman) my thoughts have of late wandered towards the American style of barbecue—meat cooked long and slow in a big-ass smoker.

Now, my barbecue can double as a smoker, and I've invested in a thermometer so's I can start experimenting with pork shoulder and thick planks of salmon. But for now, I'm going with the spirit of the meal rather than the methodology. Pork loin cooked slow and low in a crock-pot with a ton of aromatics should satisfy my cravings.

Loin is a tender cut of meat that's surprisingly versatile. Cooked as a traditional roast, you'll get beautiful slices of flavoursome flesh. But cook it slowly with plenty of liquid to stop it drying out, and you end up with meat that falls into delicious shreds at the touch of a fork. If the sauce you've cooked it in gives you that sweet Southern flavour, then so much the better.

Start with your bit of pig. A half-kilo joint should feed four… or a greedy Rob and TLC. Dry it well, then poke it all over with a sharp knife. Widen the slits out to form little pockets, and shove a clove of skinned garlic into each one. I reckon on seven cloves.

Now give it a coating of wet rub. Pound together a tablespoon of fennel and cumin seeds (or blitz in a coffee grinder you keep just for spices) along with some salt, then stir in a tablespoon of paprika. Sweet or spicy, your call. A teaspoon of chili powder for kick, then add enough oil to form a thick slurry. Spoon this over the pork (if you've done it right, it won't pour) and massage in thoroughly. Give it some love. Now in the fridge for as long as you can stand it. A couple of hours is fine, but overnight if you can.

Time for the pot. I have a crappy cheap red crock pot that cost me a fiver in Tesco years ago. It's the perfect fit for this kind of thing. The lid has been broken and glued back together, and it's generally a bit tired and worn. But it serves me well for slow-cooked meat. Into L'il Red goes a sliced red onion that I've cooked off on the griddle, the juice of an orange, a tablespoon of balsamic vinegar and 200ml or so of tomato passata.

You have a griddle still hot from the onions, so use it just to brown the meat on all sides, which'll also start helping the fat to render away. Once sizzly-gold, snug your meat into the sauce, then pour over half a bottle (about 250ml) of a good dark ale. I used Ruddles County, because that's what I had. Hobgoblin or something similar would work really well too. Finishing touch: a little honey over the top of the meat.

Sounds good already, don't it? OK, into the oven. 130 degrees fan for 4 hours. Set a timer. Walk away. Go mow the lawn. Let the magic happen. If you're super-paranoid, set a timer for two hours, peek just to make sure it's not drying out, then reset for two hours and go tickle your wife or something. Trust me, though, it'll be fine.

After four hours, put the oven up to 200C for 45 mins to an hour, to let the sauce thicken and for a light crust to develop on top of the meat. Keep the lid on the pot, though, or there's a danger of burnination, and we don't want that after the amazing smells that have been developing over the afternoon. While the oven's hot, you can make the accompaniment: grown-up tater tots. Chop a couple of baking potatoes into inch-thick cubes, toss them in a little oil with a pack of lardons or chunked-up pancetta, and cook in the oven for, as fate would have it, 45 minutes to an hour. It's almost like there was a plan here or something.

Finally, *finally*, it's eatin' time. Take the meat from the pot, and try carving. You'll find it'll succumb to the knife like a girl in a horror film, falling apart tenderly at the first touch of the blade. Plate a pile of the pork alongside the tater tots, with something green and leafy on the side. Spoon over some of the sweet, sticky sauce, and pop a couple of ladlefuls in a jug to have with the meal.

This is deeply satisfying stuff: fragrant, juicy and moreish. Remember the garlic we stuffed into the pork all those hours ago? That's melted, effectively, flavouring the meat even further. With the wet rub adding a cumin/aniseed waft to the pork, it's barbecue fit for the gods.

If you have leftovers, then things get even better. Dress the meat in what remains of the sauce, and you have pulled pork to pile into buns, or serve with rice or noodles. God dammit, I'm hungry again.

Tweaks? Well, I'm kicking myself for not using the smoked garlic I have to stuff into the pork. If you change the rub up with five-spice and coriander seed, and add soy rather than balsamic to the sauce, you have something verging more on a sweet and sour (if you're going to try that, though, add some rice wine vinegar to get the tartness).

This is low-work, no-fuss cooking that's great for a quiet Sunday—a meal that lets you get on with other stuff and rewards you at the end of the day. Now that, Readership, is what I call soul food. 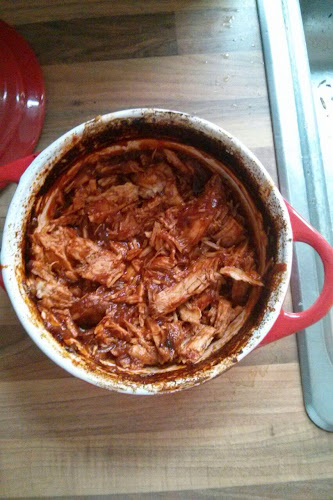