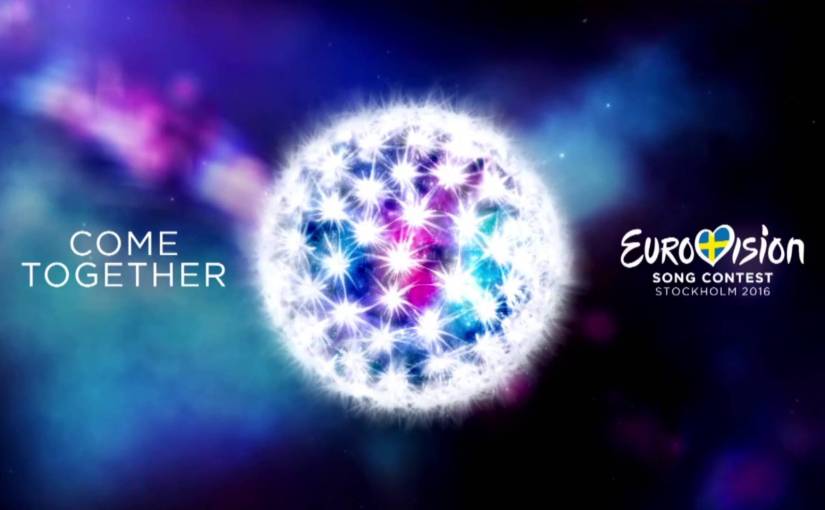 Well, of course it had to be Eurovision that brought me back to the blog after so long.
Consider: a mass-entertainment show going out to hundreds of millions of households celebrating a particular kind of slightly bonkers contemporary pop. It could be awful, yet somehow it transcends the base idea to become something other, something altogether more delightful and strange.

Eurovision is at once political and yet transcends borders. There are complaints every year about the partisanship of the voting, how certain countries always vote a certain way. And yet, this is a Europe that cheerfully allows entries from Israel and Australia, where surprises switches in the vote can take down a sure-fire winner in an instant.

No, friends. The only thing certain about Eurovision is that it is stuffed full of jaw-dropping moments. And this year was Peak Eurovision in every way.

We were in Sweden, which is the spiritual home to the event. Swedes embrace Eurovision with an enthusiasm that seems both sweet and a bit weird. When you consider that the country rules at producing skewed, knowing pop, it’s maybe not so much of a surprise. Hosted by last year’s winner Mans Zelmerlow and Swedish TV personality Petra Mede with a knowing sense of humour, the show was hosted in two separate arenas–one purely to host fans who were there for the atmosphere, and watched the show on a giant screen. Now that’s dedication…

Events kicked off with a “fashion parade” to introduce each act, the models on the catwalk dressed in costumes that were… how shall we put this… made out of air conditioning ducting and 3D printed geometric forms. A look best described as fashion robot slinky.

The competition itself threw up its own collection of sartorial gems. From the tent-dress of Croatia’s Nina Kraljić that split open on the first chorus to reveal a second, more form-fiting outfit underneath, to the 80’s sci-fi day-glo stylings of Hungary’s Poli Genova, there was plenty to goggle at from the female entries. The blokes, however seemed generally happy with the tried and tested biker jacket and jeans ensemble. Ho very hum.

The music, meanwhile, was naturally heavy on the pop and balladry, with the occasional veer into rockier terrain from Cyprus and Georgia. The latter, worryingly, seemed to be taking their style cues from lumpen indie louts Kasabian. No need for it really.

The British entry was a perky bit of playground pop from soon-to-be CBBC presenters Joe And Jake. It was perfectly acceptable, bouncy and positive, and a step change up from the dire excuses for effort we’ve sent out over the last decade. The work the two boys put in was reflected in the UK’s best points total in years. Naturally, not enough to get us a chance at the trophy, but baby steps and all that.

This year marked the first Eurovision since Sir Terry Wogan’s sad passing. His droll, increasingly boozed commentary was a key part of the show for the British audience. Graham Norton, who’s had the duty since El Tel stepped down in 2009, sweetly announced a toast for his fallen comrade during song 9–the point at which Terry told him it was acceptable to start drinking. TLC and I certainly raised a glass, although it would be a filthy lie to say that was the moment that we moved onto the hard stuff.

Of course, Eurovision is a show of two halves. The contest, and the vote-counting. With 42 countries putting their oar in, and phone votes from across the Eurozone, it’s not really surprising that it takes a while to collate the points. The “entertainment” that takes place while the voting grinds away is usually pretty painful. It was during the midpoint break of the Irish Eurovision show in 1994 that Michael Flatley first unleashed Riverdance on the world, for example. So expectations were less than high, and the world sighed and thought about putting the kettle on.

And then. Mans and Petra led an extraordinary routine that simultaneously celebrated and mercilessly took the piss out of the whole Eurovision experience. A knowing, screamingly funny bubble-popper called Love Love Peace Peace, it was instantly declared by many on the social networks as the real hit of the show. I mean, take a look at this…

After that, you’d think the count would be an anti-climax, right? Yes, well, about that. Sweden saw a chance to make things a bit more dramatic, and split the votes in two. The official panels would give their results first, then the phone votes would be added right at the end.

Which made for one of the most thrilling ends to a Eurovision I’ve ever seen. With the jury counts giving Australia a dominant lead over rivals Ukraine and Russia, it seemed that the game was over and the title was Antipodes-bound.

But then everything changed. The Polish entry, a dire caterwauled mess, was given hundreds of points by the public, catapulting it from second last to eighth place. On the very last vote, Australia was beaten to the title by the politically-charged Ukrainian entry, dumping Russia out of the contest. The tension had been almost unbearable. The release, when it came, euphoric. It was everything you want from Eurovision and more.

What can we take away from this year’s experience? I’ll confess, I’ve been down about the show in the past. But now it’s a highlight, as TLC and I join chums on the Twitters and banter and howl at the whole thing. It’s a regular reminder that I genuinely love the bonkers world of Euro-pop, and that it can be a gleefully surreal and massively entertaining way to spend a Saturday night. Yes, it can be political, too. The winning song was a pointed jab at the Russian incursion into the Ukraine in 2016, thinly disguised as a song about the expulsion of Tatars from their homeland by Stalin in 1944. But that’s part of the fun of it. There’s always a bit more under the surface, if you care to have a dig around.

And the change to the way the votes were presented (not, as many commentators claimed, tabulated) showed the fundamental disconnect between what the juries and the public like. I’m still dumbfounded at the way the Polish entry blasted up the table at the end, and the poor showing for some of the great glitterball pop entries against frankly turgid balladry.

Which just goes to show how little we all know, and how that uncertainty makes the whole thing so addictive. If you think you know what a Eurovision night holds, get ready to have your head turned right round, baby, right round.