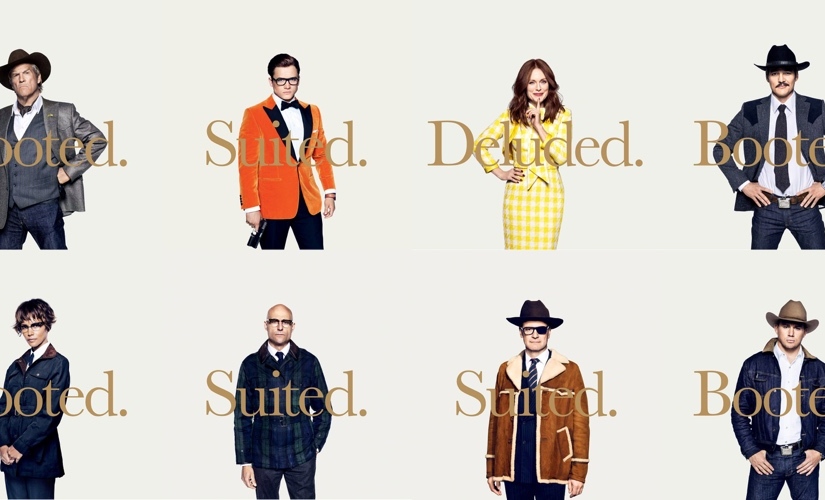 The second of Matthew Vaughn and Jane Goldman’s Kingsman films is, for the most part, a blast. You should walk in with the understanding that plot holes and logical leaps-of-faith are part of the landscape, though. It’s sweary, gory and very, very silly. Needless to say, then, that I had a great time. There are a few points I wanted to explore with the benefit of hindsight, after my head had stopped spinning from the wild ride.

Primarily, we need to look at the motivation of the villain of the piece, all-American drug pusher Poppy, played with perky viciousness by Julianne Moore. She poisons the world’s drug supplies, holding a large proportion of the world’s population to ransom. What’s she after? She already has more money than she can possibly need. Power? Well, again, money buys a lot of things. Simply, she wants acceptance, a chance to trade legally, and an end to the War On Drugs.

As Goldman’s script tartly notes, alcohol, tobacco and sugar are just as addictive and harmful to public health as Poppy’s products, which are used daily by all strata of society from the White House down. And yet, she’s forced to live in hiding, a pariah, a criminal. The harm in illegal drugs is, arguably, equally down to the effects of prohibition as to their inherent chemistry. Note that Poppy’s demands include drug regulation (which would include increased research into their potential benefits as well as harm—as marijuana moves towards legalisation it has become the most researched substance on the planet) and the ability for profits from drug sale to be taxed.

Of course, there’s that nagging detail that Poppy’s willing to murder hundreds of millions of people to get her way. Nevertheless, I found it difficult not to see her point. Particularly as the other villain of the piece, the President Of The United States, is equally willing to commit mass genocide in order to get his way.

The dichotomy at play here becomes even more pointed with the realisation that the Statesmen, America’s own version of the independent intelligence agency, are funded through the proceeds of the sale and distribution of alcohol. This is clearly big business. Statesman has extraordinary resources to hand, dwarfing their British cousins. What effect, I wonder, would an armistice on The War On Drugs have on Statesman’s profits? As, like Kingsman, there’s no oversight on the agency’s actions, could there be an argument that jovial Jeff Bridges (as the avuncular Champ) could have a vested interest in keeping potential business rivals like Poppy at bay? This question is deftly handled before a final fumble, the point where Agent Tequila (a boot-scootin’ Channing Tatum) is scolded for indulging in Poppy’s products by Champ:

‘Next time, stick to booze.’

Because death through liver failure is a much more socially acceptable way to go.

Moving on. The SF-nal aspects of Kingsman are pushed very much to the fore in this second instalment. We’re in the realms of robot dog-shaped killing machines, cyborg henchmen and medical nanites. Add on the better-than-human abilities of Eggsy, Agent Whisky and co, and it becomes pretty clear that we’re watching a superhero movie with better tailoring. The tired comparisons to Bond are becoming ever less relevant as Vaughn and Goldman craft a story that owes little to Fleming’s spy and more to Marvel and DC’s cinematic universes. They have form with capes of course, following X-Men First Class.

It’s worth noting Eggsy’s attitude to sexual contact with a target as a mission objective in comparison to 007. Bond would do the nasty without a second thought. His willingness to bump and dump is problematic, of course, and he’s left a lot of dead conquests along the way. In short, sex with Commander Bond is a pretty good way to ensure you wind up suffocated with spray-paint or a light coating of crude, hunted to death by dogs or poisoned with a dangling thread of cyanide.

Meanwhile Eggsy, faced with a very willing Golden Circle girl in underwear and wellies, is guilty enough about the prospect to call up his girlfriend and ask permission. What’s more, he ends up accidentally proposing… and actually honouring the commitment he made at the end of the film. Let’s just hope there’s no chance of a call-back to the one time Bond made it down the aisle, eh?

Everything is left wide open to a Kingsman 3, of course, and I have no problem with this. There are some interesting paths down which to wander. How marriage conflicts with the life of a Kingsman. Side-effects to Harry’s head injury—I note that the hallucinations and co-ordination problems he suffers from were conveniently ignored in the last third of the movie.

And then there’s the whole Statesman embrace of the Kingsman brand, which looked to me like nothing more than a corporate takeover. What happens if the national interests of the UK and the US diverge? What price brotherhood then?

A few random observations before I go.