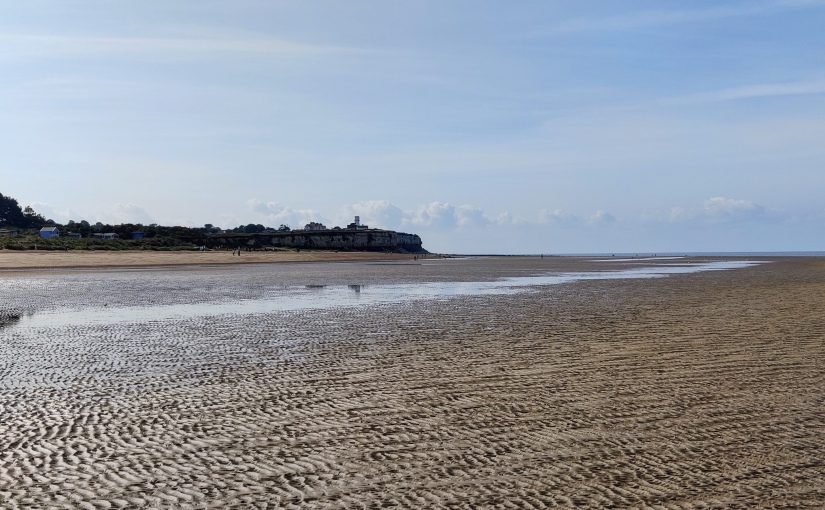 I last three minutes on the beach at Old Hunstanton before the boots come off. A day later, at Holkham, I’m barely out of the car before going barefoot. I dig my toes into cool soft sand, ridged with complex patterns from the tide. Whorls and loops like a god’s thumbprint pressed into the ground, stretching as far as the eye can see.

And you can see a long way on the coast around here.

The beaches of the North Norfolk coast have a special draw. More than many around the country, they are liminal spaces, neither land nor sea, border territories where you no longer have to allow the rules of the life behind you to cling to your shoulders so closely. I devolve into a ten-year-old boy or perhaps even a dog, plashing in and out of pools, scampering down to the foam at the water’s edge to let to let the tide nibble at me. My shoulders drop as the heavy grip of the word falls away.

Autumn is here. The equinox was with us at Holkham, although there was no feel of the season of mellow fruitfulness. It was bright and warm, with enough of a breeze to cut the heat to a glow. The car-park up past the dunes is full, but once out on that great expanse of beach it seems like there is hardly anyone around at all. It’s quiet too, apart from the chatter of gulls, or the rattle and roar or military transports or the occasional jet from RAF Marham. And the hush and hiss of the tide, of course.

There are horses on the sand—a couple of what looked like Suffolk Punches, wide and tall as tractors although far more nimble, and a Shetland with a small girl riding, proud and straight-backed in her sparkly crash-hat. Of course, there are many couples with dogs. It seems to be the rule. And, most bizarrely, emerging from the sea in front of us, nudists—two men and a woman, all Of A Certain Age, happily sunning their wobble and crevices, marching around looking very pleased with themselves. Like I say, the rules slip away in the liminal zones.

It’s been a trying year. A worrying year. A year where the resolution we hoped for simply didn’t arrive and we started to come to the dreadful realisation that The Situation isn’t going away. I still mask in shops and on buses. I still keep my distance. It’s the right thing to do, and you’ll never find a Facebook post to persuade me otherwise.

2021 has applied pressure to TLC and I. Pummelled by workload, we’re often too exhausted to just be people rather than employees. When the day job starts to eat into everything, you start to wonder how to find balance. Plans have been delayed while we try to figure out a way forward. And there is one, very definitely. We needed a place where we could see that more clearly. An opening of the horizon. a place to regain perspective.

As summer falls away over our shoulders we are facing forwards. There have been bright spots to the year (a very significant birthday, the completion of a novel, a reunion with very good friends) and we’re very aware how lucky we are. That doesn’t mean we don’t get to be sad or tired or to struggle with how the world is. That’s a common feeling, but it doesn’t have to be the only one.

Which puts me back on the beach at Holkham, trying not to think about the nudists. The sea laps round my ankles, cool and clean. The line between the water and the sky is razor-sharp, cobalt to Carolina blue. Behind me, TLC and the friends I lovingly call The Lions Of Lexham chat gently. I’ll join them again in a moment. Right now, I straighten my lightened shoulders and my uncricked neck, waggle my toes in the water and face the horizon with a smile.

See you next Saturday.