A level of routine is, as any fule kno, essential to getting through the long haul at home without going completely cuckoo-lala crazy. As a gentleman of a furloughed persuasion, I am led in that routine by TLC, who works from home and therefore finds her days filled with meaning and purpose (and endless Teams sessions and slow-loading document uploads and all the other pitfalls and nightmares surrounding the transition to domiciled employment).

Therefore, no lollygagging in bed. As TLC showers, I am making tea. As she breakfasts, I shower. A brace of coffees as she hits the network. Then I leave her to it, and start considering the next big event of the day—lunch.

END_OF_DOCUMENT_TOKEN_TO_BE_REPLACED

As part of Rob's Attempt To Get Back On Track with His Writing, I intend to ease myself in gently. It's been a while since I posted a recipe. And this one, my Lovely Readership, is a doozy.

I love meatballs. With spaghetti, or some cubetti potatoes, and of course slathered in a rich tomato sauce, they're an easy midweek supper. But they're surprisingly easy to make, and you know exactly what goes into them. Let me walk you through the creaton of the best meatballs you'll ever eat.

The meat is pork and chicken. To be precise, pork shoulder and chicken thighs. Both have enough fat in them to add tons of flavour and, more importantly, hold together without the need for breadcrumbs, eggs or other binders. All they need is a little care in construction.

I'm lucky enough to have a mincer attachment for our K-Mix, last year's Bake-Off inspired Christmas present. It's become a handy tool to take really cheap cuts of meat and make flavour-packed burgers and sausages. Meatballs are even easier. I added some sorry looking herbs from the supermarket (basil and parsley in this case, but thyme and sage would work fantastically), and ground away. 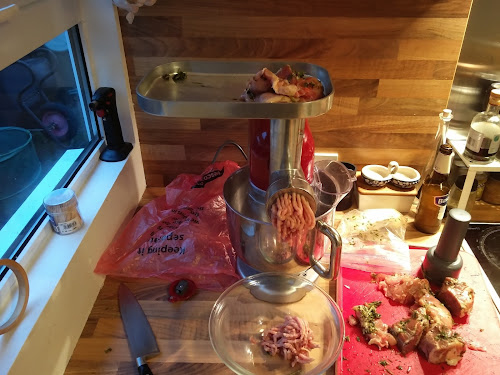 If you don't have flash-boy toys, go ask a butcher to do the chopping. They'll be happy to help.

While I was mincing, I had a couple of finely sliced leeks and a couple of cloves of garlic sizzling slowly in a pan. Once soft and fragrant, I let the veg cool a bit before squishing it into the pork and chicken mix. Don't mash it up too heavily, but make sure everything is well mixed. Add some salt and pepper, then gently form into glorious globes of gorgeousness. 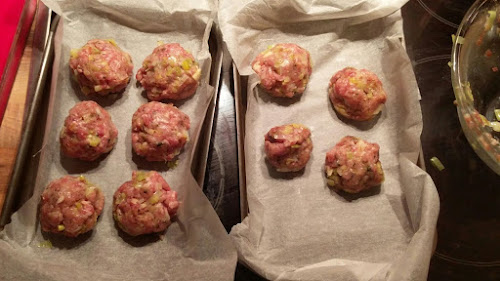 Now the important bit. Clingfilm the balls, and stick them in the fridge for at least an hour. It'll help them to hold their shape. You notice that I've put them on baking trays over baking parchment. There's a good reason for that.

When you're ready to cook your balls, pop them in a pre-heated oven at 180C for about 25 mins, turning them halfway through. They'll leak out some oil while cooking, which will help them develop a fragile crust. Don't fiddle with 'em too much and they'll keep their shape and take care of themselves.

If you're thinking ahead, you'll have some cubed potatoes in the oven already, so that when the dinner gong goes you can whip something out of the oven that looks like this: 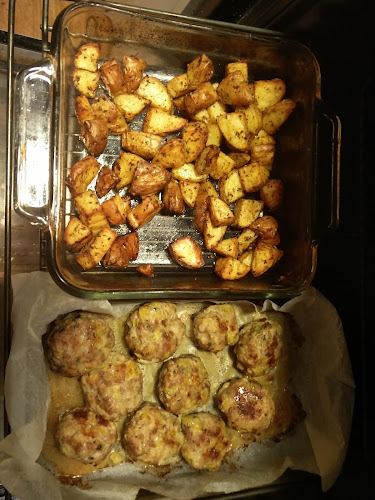 Now we're talking. Serve with a simple chunky tomato sauce, that's all you need. The meatballs are fragrant, herby and meaty without feeling too heavy, textured without feeling gritty, deeply flavoured without being greasy. I am dead chuffed with these little beauties, and I recommend you give them a go. A tasty autumnal treat!

(It has been drawn to my attention that some of you fnd the word “balls” inexplicibly hilarious. I have also been accused of pandering to said lowest-common denominator in this piece. I really don't know what you're on about. There's nothing wrong with popping a hot pair of balls in your mouth and noshing away).

Many people extol the virtues of red sauce. Others prefer their sauces brown. I’ve always been partial to a spot of green.

This is the stuff that you can’t get in bottles. The best name for it is the Spanish shorthand – salsa verde. Unlike your red or brown condiments, this sauce doesn’t have a secret recipe handed down from father to son, locked in a safe somewhere. It’s an open source, open to interpretation kind of a deal. It also doesn’t last that long – certainly never long enough to form a crust round the top of the bottle. But as it takes so little time to whip up, that’s not such a big deal.

In basic terms, salsa verde is a herb and oil suspension, livened up with lemon juice and salt. You need a blender or mixer with a bit of grunt to it, unless you’re feeling prehistoric and prefer pounding your food into submission in a mortar and pestle. Which’ll work fine, but you know, 21st century and all that, the machines are our friends.

Green, leafy herbs are the order of the day. My preference is for lots of parsley, mint, basil and fennel or dill. My salsas are heavy on the fennel nowadays as I have a monster of a plant in the herb patch and I have to tame the bugger somehow.

Get yourself a decent handful of fennel and flat-leaf parsley, and about half as much basil and mint. Blitz, along with a few cloves of garlic, then pour in olive oil until you have something with a decently sloppy but spoonable consistency. Add the juice of a lemon, and some salt. You’ll probably need more than you think of each. I’ve taken to throwing in a couple of preserved lemons instead, which do the job in one hit. Taste, and taste again. You want something loud, tart and green, sharp and bright and grassy as the first sip of a gin and tonic on a hot summer day.

Fish and chicken are perfect for this stuff, although I’ve dolloped it on a burger with good effect. In fact, most barbecued meats will snuggle up happily to the salsa. It’ll keep in the fridge for a few days, although it will thicken up. Once it’s at that stage, stir it into mayo, yoghurt or sour cream to keep the salsa useful as a chippy dip, or a creamy side for lamb chops. In short, this is my go-to accompaniment for the warm months, and one of my principal reasons for growing herbs. A spoonful of summer.

A busy day in the kitchen yesterday. A fresh loaf, a blueberry cake, and hell, I’m in the kitchen anyway, I might as well go the whole hog and make a fish pie.

This is more or less Nigel Slater’s famous recipe, and I’ve been making it for long enough that I can quote it from memory. It’s a messy job, there’s no doubt about it, but I’ve tweaked it enough that it’s reasonably straightforward. Even if it wasn’t, fish pie would be worth the fuss.

I start with about half a pound of fish in my big saute pan. Enough milk to cover goes in, with a bay leaf if you’ve got one and some peppercorns. Bring it to a simmer, and cook until the fish is about done. Should take about ten minutes. While that’s bubbling, chop a couple of big leeks and some mushrooms (enough to give you a couple of big handfuls of dice) and a stick of celery. I also put four fist sized potatoes in the steamer to cook, as they are, in their skins.

Fish done. Fish comes out of pan, and put somewhere to stay warm. If you’re a big ole cheaty-head like me, you’ve used a fish pie mix that’s skinless, boneless and already chunked up. If not, the skin and bones will come away easily from the cooked fish, which you should keep in chunky pieces. No mince here. Pour the fishy milk into a jug through a strainer. Keep this with the fish.

Wipe out the pan. Back on the heat with a little oil and butter, and cook the leeks and celery over a lowish heat with the lid on until the leeks are soft and bright green. Whip those out, reheat the pan and do the mushrooms, letting them soak up the oil and butter. You can do these in two pans if you like, but do them separately to stop the mushrooms going wet and sloppy, rather than flavoursome and slightly caramelised.

Once the mushrooms are nice and brown, add the leeks back in, and sprinkle over a couple of tablespoons of flour. Let this cook for a minute of so until you can’t smell the flour any more, then throw in the milk. Let this bubble until the sauce you suddenly have in the pan thickens a bit to a nice creamy texture. A big spoonful of creme fraiche, lots of salt and pepper, then stir the fish back in. If you fancy chucking in any fresh herbs, flat leaf parsley, maybe some celery leaves, hell, even basil, now’s the time. Give this another five minute love in. The sauce should be creamy and rich, not at all runny or sloppy.

While that’s doing, check your spuds. They should be done. Do what you have to do to turn them into mash. I’m not going to tell you how to do it. You’re a grown up. Be comfortable with your mash-making technique.

Pile the mixture into a baking dish. Now the spuds. I use a ricer, and squish cooked unpeeled potato straight on top. Saves on peeling, and gives a nice light result. Then cheese. People say you shouldn’t put cheese on a fish pie. Screw them. I like cheese. I used a nice strong Wyke Farm cheddar with horseradish for a little doink of heat. If you’re going to be all huffy about it, just dot some butter over your mash.

Hot oven (about 200C, Gas 6) for 15 minutes or until there are nice brown toasty peaks on your mash.

Serve to someone you love (you’re not gonna go to all that effort for someone you don’t at least fancy) with some peas and a little soft music.

Worry about the washing up later.