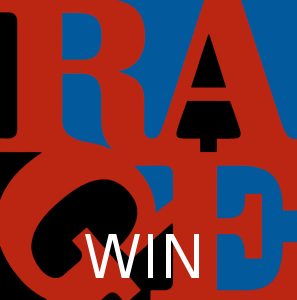 Rage Against The Machine is the UK’s Christmas No. 1. That still feels like such a strange phrase to write. It outsold the record that most industry voices had assumed would be a shoo-in, Joe McElderry’s “The Climb”, by a cool 50,000 copies. This is A Very Good Thing, for a number of reasons.
Of course, there is the argument that both records are effectively making money for the same company, Sony. This misses the point. The X-Franchise has lost the war of hearts and minds pretty severely this year, and that is going to hurt the brand badly. The realisation that there is a large enough percentage of the population out there that are not just indifferent or unwilling to spend money on supporting the X-Franchise, but despise it actively enough to independently source another track, successfully campaign for it and buy it in sufficient numbers to make it the popular choice must be horrible for Cowell and crew.

This year has seen a bit of a sea change in the way music is offered and distributed to the public, and Rage’s victory shows that clearly. It was not available to buy in the shops, and had not been re-released by Sony. It was a song that went to number one because people wanted it there, and the fact that it has made it the top slot today could send marketing departments in record companies worldwide into a panicked spin. What do you do if your carefully concieved, hideously expensive campaign to push the next big thing to the top of the charts gets shoved aside because some scrote with a Facebook camplaign decides it’s time Mr. Blobby made a comeback?

This is the harbinger for absolutely massive change in the delivery of music, as it proves without a doubt that crowd-sourced PR works. It’s to Rage’s credit that they saw the groundswell and ran with it, zipping to London to record a live session on Radio FiveLive (“now, let me get this straight. You’re telling me that you don’t want me to sing the line “Fuck you, I won’t do what you tell me to. That’s what you’re telling me. Just so I’m clear.”) that will go down as a classic comedy swear moment in radio history. They have announced that the profits from the single will go to Shelter. There’s a seperate campaign running that has already raised over half a million quid for the charity. I’ve dropped a fiver to that one. Seemed only fair. The download of the single cost me 29p from Amazon.

Rage have shown themselves to be connected with their audience, filled with humour, charity, compassion and fun. The X-Factor camp, on the other hand, have come across as curmudgeounly, whiny and increasingly self-centred. It seems to be all about little Joe’s dream of getting to number one, and anyone that buys the Rage single is stomping on that dream.

Aces. I bet people started buying “Dying In The Name Of” twice when they heard that tripe.

But the one sign that has cheered me most this Christmas is contained in the choice of song that the X-Franchise chose to launch little Joe’s career. Choosing a ballad for the grannies to swoon over is a decision that has stood Cowell and his band in good stead for several years, but it’s backfired pretty impressively in 2009. Let’s not forget, this campaigning idea began last year when Jon and Tracy Morter put Rick Astley’s Never Gonna Give You Up against Alexandra Burke’s Hallelujah. Then, the campaign was too fragmented, with a lot of punters choosing to buy the Leonard Cohen or Jeff Buckley versions of the song instead. But the point was that the song won. Hallelujah is an excellent choice for a Christmas No. 1 record, with the right balance of festive charm and bittersweet sentiment. Never Gonna Give you Up was a bit too joky a choice.

This year the choice was a lot clearer, and a lot simpler. The ballad was trite and turgid, and up against a song you can jump around to while swearing at the top of your voice. Barely a choice at all, really. But the result could have been very different.

One of the early choices for Joe’s first single was a cover of the journey track “Don’t Stop Believing”. A much stronger song, and one with the right balance of cheese and X-Franchise will-to-power. I think it would have won.

This shows us something rather enlightening. This is the point where Cowell has either lost his sure touch, shown he’s either fatally out of touch or has simply stopped caring about the singles-buying market. He’s facing a public that has clearly demonstrated that they do care about music and the charts very much, thank you, and are perfectly prepared to show that they have the will and the ability to take the wheels off the hit-making machine. It’s a lovely moment, and a great Christmas present for music fans across the country.

The only thing that could make it sweeter is for the franchise to release Joe’s version of “Don’t Stop Believing” as the next single. And for the Journey original to make it to number 1 instead.