Like most things in my life, it all boils down to Star Wars.

There are certain kinds of films that I really go for, and will happily sit and watch again and again. Danny Boyle’s Sunshine is one of them, and in a short introduction before it’s screening last night on FilmFour, he nailed one reason why. They all seem to be of a particular type, a genre with a history and a meme-set that is easily tracked. I love films of the genre sub-species he described as “A Ship. A Crew. A Signal.”

These are the horror-tinged bottle films, where most of the action takes place on a dark, monolithic spacecraft, within the confines of which BAD THINGS HAPPEN once The Crew pick up and foolishly answer The Signal. This Signal is usually a misinterpreted message to STAY THE FRAK AWAY. From then on in there will be running and screaming and dying and mostly a single survivor.

But mostly, there will be corridors. Hundreds of them, stretching for miles. They will be encrusted in vents, ducts, computery bits, extraneous ribbing, tons of stencilling and detailing in a limited palette of sans-serif fonts. There will be steam. Oh my word, there will be steam. I often wonder whether ships like the Nostromo and the Event Horizon are powered by a coal-fired boiler rather than a nuclear reactor.

The camera will start the film drifting in a dreamy manner down these corridors, and end it whizzing down them as the final character either has to get to a door before a timer runs out, or because something insectoid with too many teeth is chasing them. Frequently, both of these things are happening at once. There will be a whooping alert sound. It’s the same one in all of these films. There will also be a calm female voice doing the countdown. I think Winona Ryder has the monopoly on that one.

Sunshine has some great corridors. The set took over the entirety of Three Mills Studio in East London when the film was shot in 2006, and the detailing is exquisite. I’m happy to report that there’s also little attempt to score points off the meme. Although the ship is on it’s way to the sun, the corridors are dark and claustrophobic. The feel is heavy and industrial. Like most of these ships, the Icarus II is a submarine in space, a tiny metal bubble of life in an environment that’s almost instantly lethal.

I spent years in my youth drawing corridors like the ones you see in films like Sunshine and Alien. Once the technical drawing classes I took in junior high school taught me the rudiments of perspective, I was away. I can still draft a pretty good blocky spaceship in three-point, or an infinitely expansive throughway liberally coated in technological cruft. I love them. They are places where adventure happens, where there is high drama, monsters coming out of the walls and lots of those spinning orange lights they have on the roofs of ambulances.

I said at the beginning that I blamed this on Star Wars. Think about it. Two minutes into the film, after all that tedious nonsense with the yellow letters and the big triangle that goes on for miles, we are inside the Tantive IV, and we see… well, THIS. 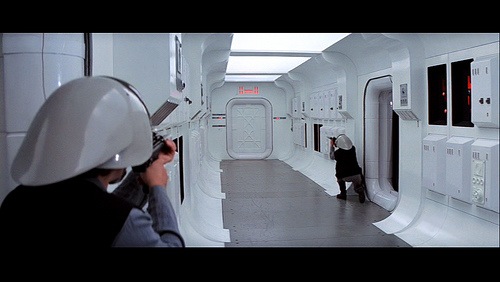 This, and the later scenes in the Death Star are something that should not be shown to an impressionable ten-year-old who’s already a little too lost in his own imagination for his own good. Especially the bits in the prison block.

For further reading, I cannot recommend Martin Anderson’s post on Den Of Geek highly enough. If you think I’m wibbling on un-necessarily, just wait and see what he’s got.

Coming up: doors in SF.

2 thoughts on “The Joy Of Corridor”