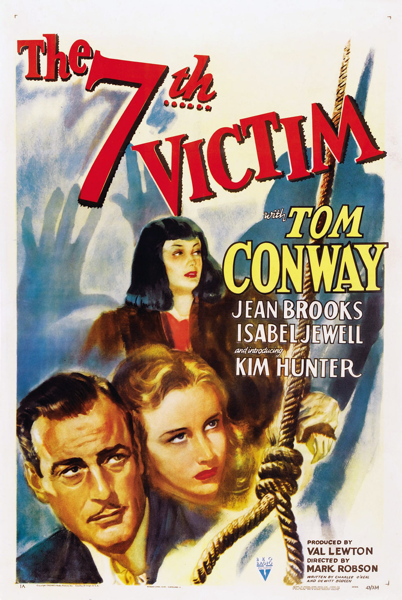 The crossing where the dark roads of horror and film noir meet is a place of fertile earth, where nightmares are easily grown. The ground, after all, is fertilised with a hefty dose of bone and blood. There are a ton of great films out there that take typically noir traits, and give them a shivery twist. Think of classics like Alan Parker’s Angel Heart, Jonathan Demme’s The Silence Of The Lambs. David Fincher’s Se7en. Kolchak The Night Stalker. Hell, half the X-Files was horror noir. Think of a film where a hard-boiled tec takes on a case, only to find that he’s hunting down something with a little more of the night in it than he anticipated.

Back in the heydays of noir, the 1940’s, this crosspoint was wide and broad. Noir has always been black and white in both visual and moral terms, and like horror, is not overly concerned that good should always triumph over evil. Both genres cast a bleakly jaundiced eye over human relationships, and easily find and stress-test the weak points.

The 1943 film The Seventh Victim saw producer Val Lewton take the psychological horror that he had pioneered in the classic Cat People, and add a noirish feel. Deep shadows and slashes of light were already visual cues for hard-boiled film, and this was a look in which Lewton’s long-time cinematographer Nicolas Musuraka revelled. On The Seventh Victim, he and director Mark Robson went a step further, soaking every frame in pools of darkness.

The Seventh Victim begins as the sheltered world of our heroine, Mary, is quickly stripped away. She attends a boarding school, the fees paid by her only relative, her sister Jacqueline. Jacqueline has disappeared, and the funds have dried up. Offered the choice to stay in the school as unpaid help, Mary instead opts to travel to New York to find her sister.

Once in the Big Apple, the mystery only deepens. Jacqueline has given away the family business, and got into some very bad company. Mary is quickly snared in a web of lies and deceit, and the hunt for Jacqueline will lead her to question the motives of everyone who pledges to help her.

The Seventh Victim casts an eerie, uncomfortable spell right from the first frames. Mary is urged to leave the boarding school and not return by the headmistress’ assistant, who tells her that “you must have courage to really live in the world” – a creepy foreshadowing of future events. Jacqueline is described as a rare beauty by everyone she meets, a light in the dark city – and yet she is obsessed with death, and rents a room above the Dante Restaurant (a powerfully appropriate name) containing nothing but a noose and a chair.

The film contains sequences that are the match of The Cat People in terms of shadowy shocks. Mary and a private detective who has taken her case search the cosmetics factory that used to belong to Jacqueline, at night. The one room they haven’t entered is barred by a black rectangle of shadow at the end of a dark corridor. Both Mary and the detective recoil at the sight of it. They are right to do so. There is death in that room for one of them.

The final fifteen minutes, in which Jacqueline wanders the streets after being cursed by the Satanists who have swallowed her life and shattered her sanity, are as powerful as any horror of the era. Vulnerable and alone, Jacqueline is threatened by shadows that turn out to be harmless, only to have new real, threats loom out of the darkness. Trapped by her own crumbling will, Jacqueline’s escape route is clear to us all, yet still a punch in the gut when it happens. Mary starts to hope for the future, unaware that her sister has already closed the door firmly on it. It’s an astonishingly bleak ending.

Noir doesn’t often get this creepy, horror doesn’t often have this atmosphere. Fans of both genres should find much to admire in The Seventh Victim, even if it’s a little too cold-hearted to love.

Leading Man Clive put me up to this, but then he knows my proclivities better than most. It proudly appears under the banner of the annual Film Noir Preservation Blogathon, raising funds to get classic and wrongly forgotten movies back into shape so they can thrill and chill a brand new audience. Readership, I urge you to support this worthy cause, which as I’m sure you can imagine is pretty near to my heart.

You can donate using Paypal by simply clicking on the lovely lady under the lamp-post below. Be gentle though. She may look like a kitten, but this cat has claws.

9 thoughts on “I Run To Death, And Death Meets Me As Fast: X&HT Watched The Seventh Victim”