The David Fincher remake of Neils Arden Oplev’s The Girl With The Dragon Tattoo is looking worse by the minute. I know it’s an exercise in foolishness to judge a film on the strength of a couple of trailers and a poster. But Sony Pictures have sent out these images to garner a first reaction to the film. So here’s mine.

(NSFW after the cut. There is an exposed nipple. It is pierced. Be afraid.)

OK, disclosure. I’m hugely biased on the subject of Lisbeth Salander. The Girl With The Dragon Tattoo is one of my favourite films. I was one of the first in the country to see it, in a screening at Frightfest in 2009. It was an unusual choice, which the organisers admitted. But, they insisted, there was enough strange nastiness to keep a hardcore horror crowd interested. They were not wrong. It’s a dark, labyrinthine tale of lies, secrets and serial murder. I was hooked from the start, and landed as soon as Noomi Rapace stalked onto the screen as the Girl of the title.

She’s straight out of a cyberpunk novel. A punk hacker with few morals or boundaries, a fearless and tenacious foe for anyone that crosses her. Her revenge on the abusive lawyer who is supposed to be sponsoring her care is one of the more extraordinarily brutal moments in modern cinema. She does not do compromise. She does not do defeat. And she never, never gives up. She’s a modern feminist icon, and it is a failing of modern fiction in all it’s forms that there are not more characters out there like her. If I had a daughter, I would bring her up to revere Lisbeth as a hero.

Let’s talk about the remake, then, with the understanding that I consider it completely un-necessary. I’m not blind to the fact that Hollywood has a long and inglorious history of taking movie hits from around the world and redoing them without the foreign bits that make the domestic American audience uncomfortable. Sometimes they even get the same director back in – witness George Sluizer, whose two versions of The Vanishing are a decent education in what meddling Hollywood executives can do to a good idea. And of course, The Girl With The Dragon Tattoo is a worldwide phenomenon, and an English language version is a sure fire money earner. Yes, yes, I know all that. I am above such things. I have other concerns.

Notice that I referred to Fincher’s film as a remake of the Swedish original, rather than a reimagining of Steig Larsson’s book. That’s based on a good look at the trailer, which references Oplev’s wintery imagery veeeery closely. In fact, on initial views it looks like a shot-for-shot do-over projected through one of those polarising lenses mistakenly left in after a 3D screening. There’s no sense of an original take on the material. Which I guess shouldn’t be such a surprise. The focus is on Daniel Craig rather than Rooney Mara as Lisbeth, but then he’s the bankable star. She’s just the face of the film – and incidentally a face that’s been styled and cast to look as much like the original star, Noomi Rapace as possible. Noomi turned down the chance to reprise the role. Can’t say I blame her.

I’m more bothered by the first promo image for the film. Here’s the international poster for the original version. 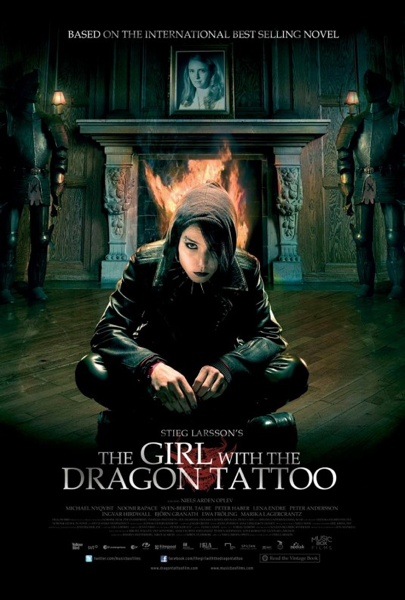 I think that tells you everything you need to know about Lisbeth, her character and attitude in one quick hit. Look at the way the fire behind her frames her head in a blazing halo. This is not a girl you want to mess with.

Compare that with the new image, released last week.

She’s topless and vulnerable, cradled in Daniel Craig’s protective grasp. Just another goth babe with a nipple ring. An object to be ogled, rather than the tough, wounded but unbowed Lisbeth we all know and love.

This, from Movie.com’s Erik Davis, is sadly typical of the type of nonsense we can come to expect for the rest of the year. Erik tries to parse the reasons for the nudity and the pose, concluding:

1. The character of Lisbeth Salandar is very guarded when we first meet her, but slowly peels off layers of her clothes (literally) and personality as she grows closer to Mikael Blomkvist (Daniel Craig), giving herself over to him spiritually, emotionally and physically.

3. Lisbeth Salandar is a wounded and vulnerable character (hence the nudity), and so Blomkvist — with his arm tightly wrapped around her — is protecting the girl from those who want to harm and take advantage of her, which is a theme that runs throughout the book.

Erm… no. This is a fundamental misreading of the character. Lisbeth is no victim, and she doesn’t give herself to anyone. She takes what she wants and moves on, as any fan of the book or the film can tell you in a second. Reframing her as someone to be rescued, someone who needs protecting is a mistake that a lot of people will make when looking at the poster. She’s not that at all. And it’s Lisbeth that does the protecting and pulls off the rescue in the story.

I have one feeble guttering light of hope. David Fincher is one of the smartest film-makers out there, and he personally approved the image above. I hope that he’s running a shell game, getting the audience to think they’re watching a film about a hot goth girl that needs the standard rescue package from a life of crime, getting them into theatres, and then pulling the big reveal about what Lisbeth Salander is when she pulls out the tattoo gun.

If that’s the case, then this is a very clever bit of marketing. It’s just a shame that it’s being wasted on a blatant piece of Hollywood franchise-building.

For more, I recommend a look at Melissa Silverstein’s angry post on IndieWire.