The DocoPhone starts ringing. I dive for it, my responses hard-wired after years of loyal, unquestioning service to a playful, capricious master.

I lift the handset, and listen while it clicks and purrs–the line connects through a bewildering array of redirects, anonymisers and scramblers. The call could be coming from the other side of the world, or three doors down. There’s no way of knowing, and believe me, smarter people than me have tried. There’s one last ear-shredding blast of modem noise and then…

He’s in a good mood, which always sets my nerves twitching. That’s usually the precursor to one of his more unusual requests. His way of softening the blow. The last time he’d called me “Twinkle” was before the Murmansk job, when I ended up running for my life from the Russian cops after stickerbombing the Hotel Arctic. The time before that, I had spent 15 hours moving a van full of his tape archive from London to its new secure storage facility, 100 miles away. 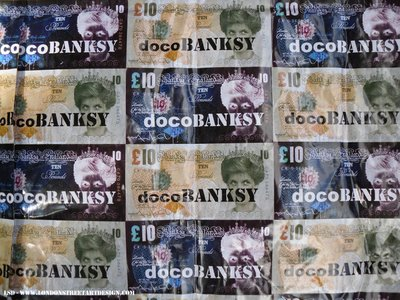 y calls you “Twinkle”, you should brace for impact, and apologise in advance to your loved ones. You’ll have a long day ahead of you.

“Things are moving ahead,” says DocoBanksy. The voice is, as ever, flat and uninflected, run through a set of filters to squash out any signs of the man on the other end of the phone. There is silence when he isn’t speaking, an utter deadness that gives no record of his surroundings. I picture him in one of those sound booths with foam spikes on the walls. Even so, I can always hear past the counter-measures, hearing the ferocious intelligence and wit glittering behind the wall of tech he throws up before he contacts the outside world. Even I, his cohort, his co-conspirator, one of the very few people that he knows he can trust implicitly, have to face his security suite.

“Things are moving ahead.” The import of the phrase sinks in. I’m suddenly light-headed, and have to sit down. “Does that mean…?” I barely breath the question. He hears the thrill and panic in my voice and lets out a chuckle, dry as last year’s leaves.

“That’s right, Twinkle. The film’s done, and we’re getting it out into the world.”

It has been three–no, scrub that–five years since Docobanksy first made contact, and rolled me into his international network of art-seditionists. I had little choice in the matter. The DocoPhone had arrived in a brown envelope heavily encrusted in stickers, and begun ringing as soon as I slipped it out. The voice on the other end of the line had laid out the plan in brief, blunt terms. DocoBanksy needed a writer, a theoretician, a sloganeer. I had the job. I didn’t have a say in the matter. He can be… extraordinarily persuasive. Let’s just say I’m not in this for the money.

“Time to spread the word, Twinkle.” Even through the thick layer of electronic filtrate, I can hear the excitement in his voice.

“We’re opening the Portobello Film Festival. August 30th, 7pm. Start spreading the new-hewwws….” Oh lord, he’s singing. The anonymising software does hideous things to his rich baritone, turning an invitation into a threat. He chuckles again. “We’ve got just over a month. Gather the faithful, Twinkle. Form a line. I want queues round the block outside the Westbourne Studios. I want it standing room only, six deep at the bar. I want a roadblock, Twinkle. I want it rammed. Chocker. Packed to the bloody gunwales. Off the hook. Off the chain. Off the scale. Off the planet.”

He takes a breath. I wait. I know him too well.

“One more thing, Twinkle. Tell them I’ll be there. One night only. In person. I’m breaking cover for this one.”

I can hardly believe it. The damn’d elusive DocoBanksy out in the world, amongst his followers. It flips everything I know about the man on its back, belly exposed to the open. A paradigm shift on a geological scale.

“This is it, then.” I can barely get the words out. “You’re going public. No more hiding. We have product, and we’re showing it.”

My throat swells. My eyes flood. The world spins around me. “And then what? What’s next? What do I do?”

And even through the filter-stack, through the snarled web of misdirection and telephonic subterfuge, I can feel him smile. A warm, honest, genuine smile.

There’s a harsh, violent blast of white noise, and the line closes. I stare at the Docophone for a minute or so.

Then I get up, shove it in a pocket, and look for my laptop. Time to go to work.

DocoBanksy screens at the Portobello Film Festival on August 30th at 7pm. For more details, and to snag tickets when they become available, bookmark the PFF website.