We have a couple of weeks to go to Halloween, so in the spirit of the season I thought I’d talk horror films. Or rather, as I am a lazy, lazy writer, let someone else do it for me. Fortunately, there is a man. A man who knows his horror and is prepared to write about it at length. A man that writes with skill, alacrity and humour. A leading man.

Readership, I am more than delighted to turn the keys of the house over to Leading Man Clive Ashenden for the next couple of posts, as he runs down his top ten films from Frightfest, and picks out the ones for which you should be keeping an eye out as we move into the dark end of the year. Pay attention. LMC knows his stuff.

It’s that time of year again; the time for all UK Fright-fans to stock up on their horror Blu-Rays, DVDs and downloads in preparation for Halloween.  Therefore, it seems a particularly appropriate time to report on the horrific happenings from this year’s Frightfest (particularly since many key films are now available to rent, stream, buy, or watch at your local cinema).

Yes, Gentle Reader, I was there at the Empire Leicester Square throughout the August Bank Holiday weekend, and let me tell you, I have seen… horrible things… things which cannot be unseen.  So, having spent a month locked in a dark room recovering from the psychic shock of watching 23 horror movies in less than 5 days – I thought I’d tell you all about them.

As is becoming tradition, I’m going to run down my top ten movies of the festival.  But first, some honourable mentions and one near-miss:

Clive Barker’s 1990 tale of a secret underworld of Gods and Monsters was brutally cut down from his original director’s vision to make the critically savaged theatrical version.  Now it is at last receiving a little love…

I almost included this in my top ten, but ultimately, the work-in-progress nature of the project made me decide to leave it out.  Projecting what was at least partly VHS quality material on one of the biggest cinema screens in the country was a bold move by Frightfest, and it was to the film’s credit that I was able to follow the fairy tale story through the murk.  I’m convinced that there is a great lost horror movie in the remains of Nightbreed – but I don’t think they’ve found it yet.  NIGHTBREED is a film of beauty, darkness and a sprinkling of fun genre cheesiness – it deserves a full restoration.  Do your part online at www.occupymidian.com. 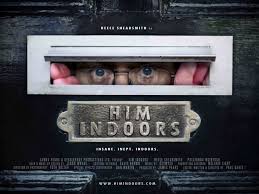 This crowd-funded (full disclosure: yes, I put some money in, and yes, Paul is a mate – but I receive no share of any profits) (ditto: Rob) short horror film starring Reese Shearsmith (LEAGUE OF GENTLEMEN) and Pollyanna McIntosh (THE WOMAN), about an agoraphobic serial killer was warmly received by the Frightfest crowd.  The first fiction film from the director of AMERICAN WEREWOLF IN LONDON documentary BEWARE THE MOON, it’s on the festival circuit now – so look out for it.

With three screens running simultaneously on some days it was physically impossible to see everything.  The following are films which I didn’t have a chance to see myself, but which got good word-of-mouth at Frightfest:

Okay, now you’re warmed up, here are my top ten: the best of the fest.  Gaffer tape yourself in – it’s going to be a bumpy ride and there may be MILD SPOILERS, but hopefully no worse than you’d get from watching the trailers.

In a set up that echoes that of teen slashers like PROM NIGHT and I KNOW WHAT YOU DID LAST SUMMER, the residents of the top floor of the eponymous TOWER BLOCK, witness the brutal beating of a teenage boy who subsequently dies.  But fearing for their lives they say nothing to the investigating police.  Life moves on, and the residents are about to be re-homed when they find themselves besieged by a lone gunman intent on revenge.

In at number ten is the first of two films in the countdown from SEVERANCE writer James Moran.  But unlike his previous scripts, this offers straight-faced suspense rather than comedic horror.

Although it takes a while to get going, and the character subplots often veer into Eastenders territory, this is a neat little thriller.  After the slasher-esque beginning it settles into a tense game of cat and mouse, with Sheridan Smith proving a spunky lead presence.  There is a definite early John Carpenter vibe, with both the story and score echoing ASSAULT ON PRECINCT 13, and that’s no bad thing.  Worth a rental.

A small fishing community in Ireland gets a close encounter of the bloodsucking alien tentacled kind.  The invader’s only weakness?  An allergy to alcohol.  The only way to fight them?  Get royally drunk!

Horror/comedy or comedy/horror?  The balancing act when these two genres meet is a difficult one to get right.  A movie that is both scary and horrifying in equal measure?  Only giants of the subgenre like AN AMERICAN WEREWOLF IN LONDON and TREMORS successfully scale both peaks.  So how does GRABBERS stack up?  Well, it has good monsters, likeable leads, and it doesn’t skimp on the scary stuff.  Where it comes up a little short is on the comedy side of the equation.

Not to say it’s unfunny, it’s just too low key and it leans too heavily on Irish stereotypes that wouldn’t have been out of place in THE QUIET MAN.  I got smiles and chuckles, when the high-concept TREMORS meets WHISKEY GALORE! premise should have delivered belly laughs.  In one scene, there seems to be a clear homage to the bar scene from GREMLINS, and GRABBERS could have used some more GREMLINS or EVIL DEAD – style anarchic energy.

Still, having said all that, there’s a lot to like here.  This is a charming film directed with visual intelligence and features some fine drunk acting.  Cheers!

A zombie plague is unleashed in the East End of London, as a half-baked robbery plot unravels.  Ground zero is a retirement home, where Alan Ford, Honor Blackman and Richard Briers are besieged by the undead.  But the bank robbing younger generation are coming to the rescue.

A zombie-comedy mash-up with Cockney gangster movies of the LOCK STOCK & 2 SMOKING BARRELS ilk, this material is very much in the comfort zone of SEVERANCE writer James Moran. Like SEVERANCE, it’s also laugh out loud funny in places.

As with most comedic zombie tales from the last decade, COCKNEYS VS. ZOMBIES treads very heavily in the (now well-stomped) footsteps of Edgar Wright and Simon Pegg’s SHAUN OF THE DEAD.  Like SHAUN OF THE DEAD, Matthias Hoene’s film is content to trot out the usual Romero rules: slow-moving zombies who can only be destroyed with a head shot etc. No questioning of tropes or visual inventiveness like you find in ZOMBIELAND, or even some minor genre entries like DANCE OF THE DEAD.  However, to the film’s credit, it does find room for the Romero-ism that modern films normally bin first: satire.  It’s a little heavy-handed, but it’s there in scenes like the meeting of the two ‘firms’.

COCKNEYS VS. ZOMBIES is at times very funny and boasts a hilarious scene with Richard Briers which is the equal of any of the humorous set-pieces in SHAUN OF THE DEAD.   Where it falls down is in the final third.  James Moran clearly loves his characters, and where SHAUN OF THE DEAD is tough enough to follow through on the consequences of zombie attacks on its characters, COCKNEYS VS. ZOMBIES isn’t.  To use its own vernacular, Moran is guilty of being a ‘soppy tart’, but it’s difficult to take against a film so intent on making sure its audience is ‘’avin’ a bubble’.

Nazi zombies attack… again.  Modern mercenaries die… again.  But this time a modern day Nazi-hunter is on the trail of the Frankenstein who created these particular monsters.

The original OUTPOST was a hit on DVD/Blu-ray, being an effective sober take on the Nazi zombie sub-genre with nice character turns from the likes of Michael Smiley.  It was a pleasant surprise, thankfully taking more cues from the underrated gem that is THE BUNKER, than schlock like SHOCKWAVES or ZOMBIE LAKE.  So how does the sequel compare?  Will it reign for a thousand years or be forgotten in as many seconds?

This film is a model of competence.  Steve Barker’s competent direction, competent acting from Richard Coyle (second appearance from him in the top ten), Catherine Steadman and (the ever reliable) Clive Russell, an effective score and an efficient script.  Only the subtle cinematography of Darran Tiernan, who gives each room in the underground complex it’s very own monochromatic shade, ups the game.  However, as any seasoned genre fan knows, competence is a much rarer quality in horror than we would like.  Competence in sequels?  Rarer still.

Much anticipated sequels to British horror successes, have not rewarded fans in recent years, with THE DESCENT 2 and THE WICKER TREE both disappointing.  I found myself questioning whether my largely positive reaction to this film was due to going in with lowered expectations because of that.  I don’t think so.  Ultimately, the best thing one can say about OUTPOST: BLACK SUN, is that it makes you look forward to OUTPOST 3.

An interpreter (Francesca Cuttica) gets embroiled into a government conspiracy when she is blindfolded and taken to a secret underground location to aid in the interrogation of a mysterious foreign national.

My review of THE ARRIVAL OF WANG in two sentences:

How do I explain that radical dichotomy?  Not since I saw Bill Paxton’s FRAILTY or Alexander Aja and Gregory Levasseur’s SWITCHBLADE ROMANCE have I had such an up/down experience with a movie.  A movie where I loved the main body of the story and hated the ending.  Now, when I say hate, I mean – bury it up to its jam smeared head in the desert and watch while fire-ants eat its eyeballs – hate (and I’ve calmed down since I watched it).

A bad twist ending has the opposite effect.  It’s like a really bad punchline to a joke.  It leaves you wincing, and angry that the joke-teller has wasted your time.  Sometimes it destroys the whole logic of the story, other times it just flips characterisations and story themes on their head.  In case you’ve not picked up the hint – sadly THE ARRIVAL OF WANG falls heavily into this second category.

So why am I still (with a very heavy caveat) recommending it?  Because two-thirds of the movie is an intelligent sci-fi trip into the TWILIGHT ZONE, examining our attitudes to immigration and to the interrogation of suspected terrorists.

Unfortunately the ending undermines all of that, and grossly insults its lead protagonist to boot.  However, even if the final arrival is a huge betrayal, the journey of WANG up until that point is a worthwhile one.  Approach with caution though…

One thought on “The FrightFest Files: Ten Horror Films To Watch – Part 1”