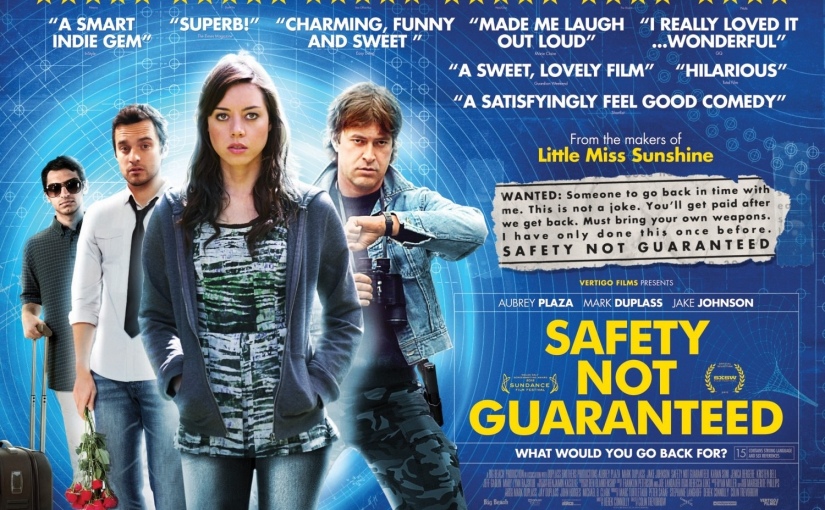 Amidst all the awards season hoopla, with one nomination-heavy contender after another parading their wares on UK cinema screens like contestants in the world’s most expensive beauty contest, here’s one that might have passed you by.

‘Safety Not Guaranteed’ is a US indie sci-fi/rom-com that comes to the UK on a very limited cinema release before hitting the usual Blu-ray/DVD/on demand/download channels. It’s the story of Darius (Aubrey Plaza: ‘Scott Pilgrim Vs The World’) an intern at a Seattle magazine, who goes on a road trip with cynical journalist Jeff (Jake Johnson), and workmate Arnau (Karan Soni), to discover the truth behind this small ad:

“*Wanted* Someone to go back in time with me. This is not a joke. You’ll get paid after we get back. Must bring your own weapons. Safety not guaranteed. I have only done this once before.”

It’s a nice hook, and after seeing the trailer it’s what got me to see the movie. I must admit I was expecting a little more SF than was actually delivered. All you ‘Primer’ fans will have to search elsewhere for more low-fi time travel thrills. What we get is a full-on romantic comedy in indie clothes.

Darius discovers that the mysterious writer of the advert is Kenneth (Mark Duplass: ‘Humpday’; Zero Dark Thirty’), an intensely paranoid and private character. In order to discover the truth about him, Darius poses as someone answering the ad, and finds herself being drawn into Kenneth’s strange world. In time-honoured romantic comedy tradition, this odd couple ‘meet cute’ in an amusing scene at a supermarket. However, this being a US indie comedy, the humour is of the deadpan ironic kind.

Producer and star Mark Duplass has pedigree in this area, making his name with heavily naturalistic dramedies with his brother Jay. I haven’t seen any of these so-called ‘mumblecore’ films, as the likes of ‘The Puffy Chair’ don’t seem to have made it to these shores. I do however recognise that ‘Safety Not Guaranteed’ is clearly rooted in 90s US indie film. The arch deadpan style of Hal Hartley, as well as that of ‘Slacker’ era Richard Linklater, is a clear influence.

The story essentially boils down to one question: is Kenneth crazy or not? However, we also get subplots dealing with Jeff as he attempts a kind of time travel of his own: to reconnect with his old High School girlfriend. Jeff also has a project to get Arnau to lose his virginity. None of these subplots are as compelling as the main plot, but to writer Derek Connolly’s credit, he does manage to keep all the various plates spinning until the end. He also makes nice dramatic use of the person going undercover story device (normally seen in cop movies like ‘Donnie Brasco’ and ‘Deep Cover’) to create sympathy for Kenneth’s prickly character.

It’s ultimately down to the two leads to carry ‘Safety Not Guaranteed’, and thankfully this is where the film is strongest. Mark Duplass is commendably deadpan throughout, and keeps the sillier bits of business rooted in the real world. It’s Aubrey Plaza who is a revelation, though. We see her character slowly bloom from a woman still stuck in sullen teenager mode, to a playful co-conspirator.

There are some nice ideas in ‘Safety Not Guaranteed’. The idea of love as an adventure a couple embarks on together; like time travel, a trip that takes courage and may have an devastating effect on the future. That said, I was left with a frustrating sense that it could try harder.

The script felt a little under-developed to me. If you’re trying to plant doubt in the audience’s mind about whether or not Kenneth is really capable of building a time machine, a detail like say, him being a physics major who had dropped out of college would have really helped. At times too, I longed for a slightly less relaxed approach to the comedy. It could have really used the screwball comedy fizz and pace of ‘Bringing Up Baby’, or the high-stakes fun of that daddy of all time travel comedies: ‘Back To The Future’.

I did enjoy ‘Safety Not Guaranteed’ though. Despite its attempt to be too cool for school, once you crack that ironic indie surface, it’s got a heart like a fistful of puppies.