A guest post from a good friend of the site, on a slightly obscure but seriously influential anime.

Chris Rogers is back, writing about an anime series that I loved back in the mid-90s, when I first became exposed to Japanimation. Expect more of this kind of post, especially as Pacific Rim has got us thinking about all things mecha and kaiju. Hardsuit go, Chris!

In 1923, Tokyo was devastated by the Great Kanto Earthquake. Nearly half a million homes of wood and paper were destroyed and more than one hundred and forty thousand people died in the tremor and firestorm that followed. The city was slowly rebuilt along modern lines, with higher construction standards and new technology, and after the second world war became one of the globe’s greatest metropolises.

But over a century later, in 2025, Japan’s capital suffered the unthinkable: the Second Great Kanto Earthquake. The city was once again reshaped by ground heave and landslide, its port inundated and its buildings – though now of concrete and steel –toppled. Recovery seemed impossible. However, the power of the zaibatsu (mega-corporations) had grown exponentially by the first quarter of the twenty first century and salvation duly arrived in the form of the giant Genom Corporation. Dominant in infrastructure, bio-technology and defence, Genom’s resources were applied on a massive scale. Use of robotics enabled reconstruction at an unprecedented rate. A new underground railway was completed, along with kilometres of urban freeways. Power came from solar, wave and thermal sources. In seven years a gleaming new capital emerged from the ruins – Mega-Tokyo.

Yet this rebuilt city was not perfection.

An immense fault nearly fifty metres high, the geological legacy of the quake, cut across the city, dividing it and its population. Crime festered in the literal underworld of sewers and drains, riverbeds and basements. The vacant lots and remaining rubble piles became battle grounds for biker gangs. Marine City, built on reclaimed land in Tokyo Bay, lay unfinished and abandoned. A disturbing new threat appeared – mechanical humanoids called Boomers, immensely strong, heavily armed and highly agile, against which the beleaguered Armored Defense Police (ADP) struggled. And there are darker whispers, of Boomers with simulated human flesh covering their chrome-plated skin, of corrupt links between the civil and military powers, of the assassination of key figures including scientists and politicians.

For most citizens, though, life in the renewed city was good. They went to work, to school and to the shopping malls, chatted, played and relaxed. Among the crowds were four young women, each very different: Linna, an aerobics instructor at a dance studio; Nene, a data operator for the ADP; Priss, a successful rock singer; and Sylia, businesswoman and lingerie shop owner. Alone, each was an orphan, a runaway, abandoned. Together, they are a vigilante mercenary group protecting Mega-Tokyo, fighting Genom’s Boomers with the hardsuit technology invented by Sylia’s murdered father.

Together, they are the Knight Sabers.

This dramatic scenario was conceived in the late 1980s by Toshimutsu Suzuki for Bubblegum Crisis: The story of Knight Sabers Mega-Tokyo 2032-2033, a new multi-part science fiction action drama serial to be released as an Original Animation Video. Particular to Japan, the OAV allowed writers, designers and directors to explore new ideas without the high cost or risk inherent in cinema or television. It was hugely popular in a decade that saw video cassette recorder ownership explode.

Suzuki’s deceptively light main title was actually a metaphor for the moment of maximum tension in any situation, the tipping point at which the Knight Sabers operate. The secondary title alluded to the unusually complex narrative structure of the venture – events would take place over a full year in the lives of both the characters and the city. Within this there was further intricacy; of the eight instalments made (thirteen were planned), the first three form a self-contained trilogy whilst numbers five and six are a two-part arc in their own right. The remaining episodes stand alone but many threads connect them.

The new work would break ground in every way. Thematically Suzuki would draw on both Eastern and Western tropes and exploit the burgeoning cyberpunk movement to craft a complex, engaging, long-form drama that aspired to transcend the anime format. Director Musani Akiyama would innovate by borrowing from Hollywood and that other trend of international contemporary culture, the pop video: fast cutting, parallel editing and dynamic camera angles and compositions would power the visuals. Having a small number of core characters that work together allows Bubblegum Crisis to neatly bridge Japanese and American storytelling conventions.

The four leads are differentiated by personality as well as haircut and colour and hardsuit design, and the headstrong, rebellious Priss, dweller on the city fault line and initiator of most adventures, provides the touchstone for the kind of single protagonist approach to drama that is generally viewed as Western in style. But this same focus on the individual is in fact found in the East too, ensuring the series is not too distanced from its roots, and the portrayal of strong females is in any event a very common if little-recognised feature of manga and anime. 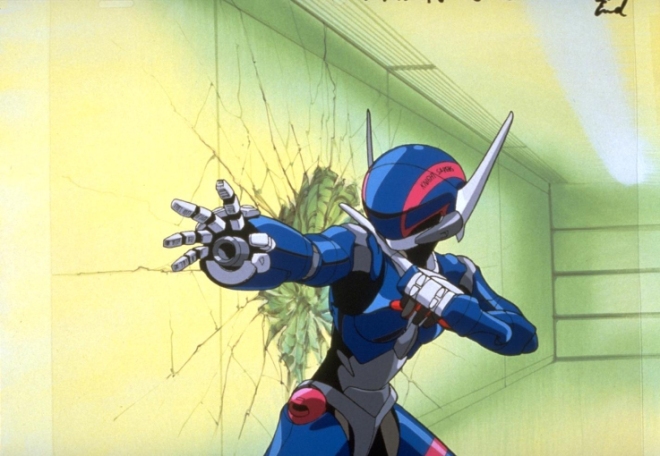 Group identity, conversely, is extremely powerful in Japanese culture, and throughout Bubblegum Crisis the Knight Sabers come together at the climax of each episode. The Knight Sabers’ Transformer-like motoslaves – motor bikes which unfold to become exo-skeletons, boosting the hardsuits’ power – carry this idea through with commendable thoroughness. The pairing of ADP detective Leon and his partner Daley mirrors this, as to a lesser extent do the machinations of Genom’s executives and even the Boomers.

Of course the crime-fighting group is a popular conceit in Western procedural drama. Disguised crusaders against crime, whether lone or in teams, have a long tradition in popular Western mythology, but the Knight Sabers’ all-enclosing hardsuit also speaks to a rich use of masks and other forms of facial concealment in Japanese culture, from noh and kabuki theatre to samurai armour. One could even read the hardsuits as a late twentieth century interpretation of bunraku, in which puppets follow the movements of their (largely) unseen operators.

Certainly the hardsuits are Bubblegum Crisis’s most obvious manifestation of the obsession with joining man and machine that is such a prominent aspect of Japanese science fiction. There are many more examples in the series, often fusing human beings to weapons systems or other mechanisms; in the case of Revenge Road, a car which channels its driver’s desires acquires sentience and acts of its own volition. The aforementioned Akira, Tetsuo, Ghost in the Shell and Silent Moebius explore the same idea, as do the Patlabor and Gundam universes.

Dating from the 1950s, this fixation can be read as a response to concerns over the country’s rapid post-war re-industrialisation and expansion and the loss of control that this might bring. That said, the depiction of technology to a level of detail that borders on the fetishistic is also common in Japanese science fiction, and Bubblegum Crisis fully embraces this. Satellite weapons, one-man micro-helicopters, fan-powered aircraft, Priss’s outrageous Highway Star motorcycle and a spider-like walking tank all feature, and anticipate many live-action Western productions of the following decades.

Of course Bubblegum Crisis shares the fault of almost all science fiction in failing to actually predict the future – the internet and mobile phones are entirely absent, with characters instead using electronic letters (floppy disks sent through the post) and public call boxes. Boomers vary from this author’s favourite, the crustacean-like BU-12B combat model, through the many generic henchmen, to the growling, animalistic, exo-atmospheric Doberman.

It is series designer Kenichi Sonoda’s hardsuits that have brought the most intense adulation from fans. The sleek lines of this elegant, close-fitting powered armour recall fashion mannequins, motorbike helmets and the robot Maria from Lang’s Metropolis. Their smooth, seamless surface finish pays homage to the enamelling and lacquering techniques practised in ancient Japan. Naturally, their feminine lines (note the high heels) clearly appeal to the overwhelmingly male fanbase of science fiction anime on a rather different level.

Directorially, Akiyama uses fluid pans around characters, rapid pull focus and unusual scene transitions – a blank screen is suddenly revealed to be the rear face of a firing range target, for example, when shots punch holes through it. Split screen is used to show the Knight Sabers’ faces behind their visors. In a pre-CGI age, cel animation is pushed to its limits as coloured neon sculpts the cityscape of Mega-Tokyo against the ink-black night, and water is rendered very believably, whether in swimming pools, running along drains or pouring from taps. Akiyama’s handling of the medium is assured, while simultaneously stretching its possibilities. The highly cinematic cold-open pre-credit sequences of the initial trilogy are especially effective.

From vehicle designs to sound effects to the shape of the GPCC pyramid to the shots of tiny lit flyers flitting through the night, the influence on Akiyama of contemporary American films, most notably Aliens and Blade Runner, is immediately apparent. Walter Hill’s non-genre Streets of Fire is also heavily mined; its opening sequence is paralleled at the start of episode one, which also showcases the final element in the success of Bubblegum Crisis – its soundtrack.

In addition to the instrumental music by Kouji Makaino, more than a dozen original songs performed by the cast are featured, either as background to specific scenes or as part of the on-screen action. They move in style from lyrical and reflective to visceral and thrilling, this last including the series’ signature tune Konya wa Hurricane, and several musical cues overall are virtual copies of the Streets of Fire score. This use of songs was almost certainly inspired by the contemporary American television series Miami Vice.

Bubblegum Crisis burst onto the Japanese market in early 1987, winning an immediate fan base. Amongst an abundance of merchandise, soundtrack albums were some of the biggest-selling items and members of the cast even toured Japan with live gigs. Episodes were released one at a time over the next three years, and the animation and camerawork improves noticeably in quality and ambition as the series progresses. Crucially, along with the film version of Katsuhiro Otomo’s Akira, Bubblegum Crisis became one of the first anime to be seen in Europe and America, initially through bootleg fan copies and then, in the early 1990s, distribution of official editions.

With a nice touch of irony, corporate changes led to the curtailment of the series. Storylines intended for the remaining five episodes were eventually merged to form the three-part continuation Bubblegum Crash. With a different cast and crew and cruder production values, it is not regarded as canon. A spin-off series concentrating on the AD Police was also made. More recently, Bubblegum Crisis Tokyo 2040 appeared on television as a remake of the original. More than twenty five years later, Bubblegum Crisis remains a milestone of visual entertainment. Compelling, exciting and sometimes beautiful, its energy is infectious and it stands up surprisingly well today. It’s time for more to hear the cry “Knight Sabers, sanjo!”

Chris Rogers writes on architecture, film and other aspects of visual culture for various outlets including Little White Lies, The Big Picture and Art of England; his work can also be found on his own website, http://www.chrismrogers.net 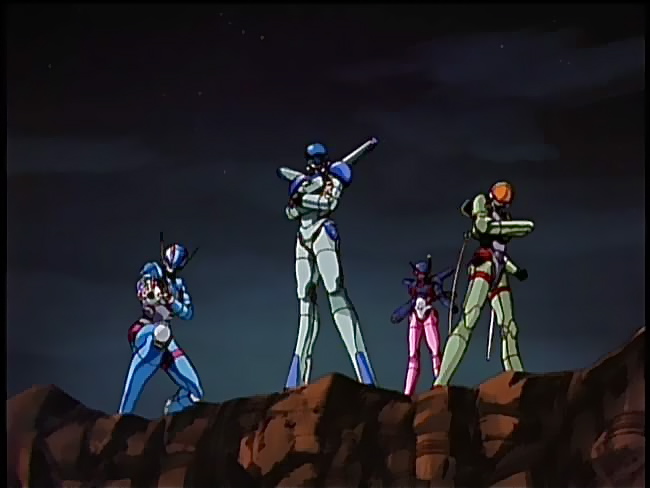 Coming up: we look at the American graphic novel version of the BGC universe–a controversial book that took a lot of heat when first published.