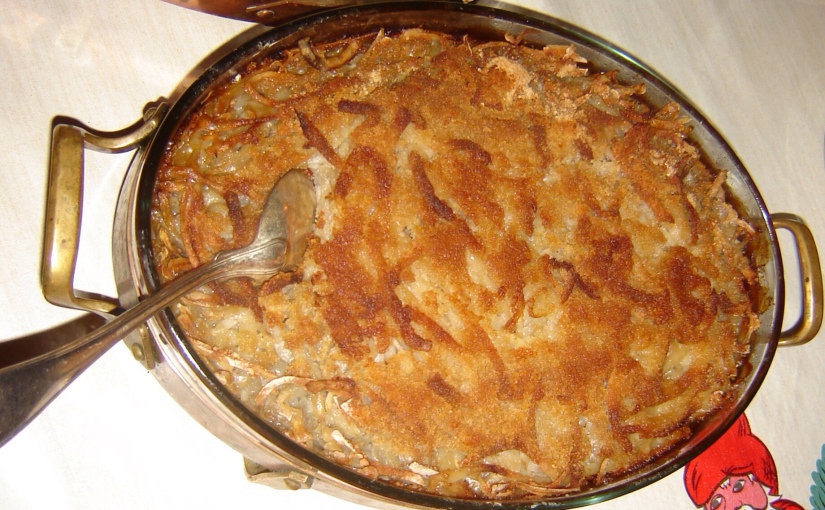 As ever, dinner the other night was dictated by what was knocking around in the fridge. From few and humble ingredients, great things can be made.

I don't often have full-fat cream in the house. If I want something creamy with a pud, it's either the crisp tang of creme fraiche or yoghurt, or if I really fancy something sweet, custard. Cream just seems a little too full in the mouth, that bit too rich. However, I couldn't resist trying out Mary Berry's cottage pie with a dauphinoise topping, and a pot of double cream was essential (it's delicious, by the way, you should try it–just don't expect to do anything energetic for a few hours afterwards).

But I used far less cream than I thought I'd need, which presented me with a conundrum. What does one do with two-thirds of a pot of cream? There I was, gazing dolefully at the contents of the fridge, searching for inspiration. My eye lit upon a jar of anchovies that had been sitting there for a while, bought when I was on a puttanesca jag. A lightbulb flickered dimly in the recesses of my cooking head. I suddenly knew what to make for dinner.

Janssen's Temptation is one of those odd dishes that sounds a bit weird until you try it. A mix of potatoes, onion, anchovies and cream, it's a kind of Scandinavian dauphinoise. It's one of those dishes that I've always wanted to try, and on a quiet day off with a cold-ridden TLC to feed, it seemed like the perfect opportunity to try comfort food with a decent wallop of flavour to punch through to her lurgified tastebuds.

A couple of thoughts before we begin. Technically speaking, Janssen's Tempation is made with sprats, not anchovies. Something worth bearing in mind if you really can't bear the salty little buggers (I love 'em). You get less of a saline kick, but also something that seems more fishy, somehow. The great thing about anchovies is that they melt in the heat of your pan, leaving nothing but sea-salt flavours.

I've seen many recipes that call for the potatoes to be finely sliced, in the same way you'd do a classic gratin. I'm with the Scandi school of thought that for this dish, they're better off cut into matchsticks, which gives a slightly less dense result.

So, let's get to it. To ease the pain of prepping this dish, you really need a mandolin with a julienne attachment. I've had mine for years. Perfect for those really skinny frites to go with a steak, and it whips through a kilo of spuds in moments. Watch your fingers, though. I'm sure mine aren't as long as they used to be. When they're done, pop the spuds in a bowl of water while you get on with the rest.

Onions. Lots. A couple of big ones. If you have banana shallots, which are brilliant in this, you'll need a good double handful. Finely sliced. Hey, your mandolin's out. Put the thin slicing plate on and the chopping's a breeze. Melt a knob of butter in a deep, wide pan then tip in the onions and let them mellow and gold up for a good 10-15 minutes. Preheat your oven at this point–180 fan, and oil the dish you normally make shepherd's pie in.

Once your onions are soft, tip in half a jar of anchovies, along with some of the salty oil, and give it a stir. You'll notice the colour will deepen as the fish starts to break up. Season, if you like–no more salt at this point, of course, but some black pepper would be nice. Give it another five minutes or so, then you're ready to build.

Spread a layer of the matchstick spuds in the bottom of the tray. Top them with about half of the onion-anchovy mix, and two or three anchovies. Then repeat, finishing with a layer of spuds. A final grate of pepper over the top.

Now for the cream. I had about 200 ml left of a 300 ml tub, so I topped it up with milk, then poured the lot over the spuds, onions and anchovies. You can see now why the juliennes are a better idea than slices–the cream goes all the way through the dish, distributing smoothly through the dish. If you have any anchovies left over, rip them up and scatter them over the top.

Dot the top with a little extra butter, then into the hot oven for around 45 minutes. You're looking for a deep brown crust, with thickened cream bubbling up around the edges.

The end result is creamy and salty, with a hint of smoke and sweetness from the onions. It's moist without being sloppy, and there's a lovely contrast between the crunchy top and the soft, tender interior. We had our Temptation with sausages, but it'll work equally well with any grilled meat, a sturdy hunk of white fish (hake would be perfect) or even just on its own with some salad leaves and bread to mop up the creamy leavings.

It's not health food, of course–not with this much butter and cream. And it's not the quickest of meals to put together. But let's face it. On a rainy Friday night when you're not budging from the sofa, you could do much worse.